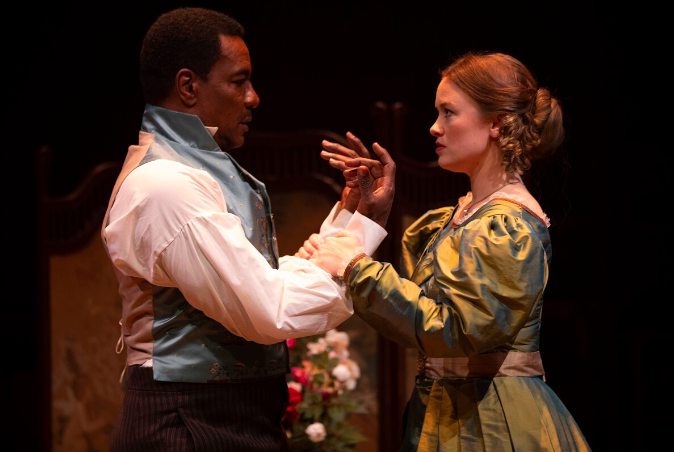 On stage until December 18th in a well-cast and capable production at Crow’s Theatre, Lolita Chakrabarti’s Red Velvet tells a fictionalized account of the life of Ira Aldridge, one of the first Black actors to become a prominent Shakespeare performer.

The production is a testament to Crow’s heads up approach to casting within the Ontario theatre landscape, bringing in an assortment of stars from across other companies to converge as a new troupe here. Jeff Lillico is delightfully smarmy as the entitled heir apparent to London’s biggest actor and musical actor Ellen Denny proves her straight theatre chops as tender leading lady Ellen Tree who meets Ira as a true peer.

Director Cherissa Richards is herself a Shaw Festival vet which might explain the presence of perennial favourites Patrick McManus and Kyle Blair in smaller roles that go far to establish the world Aldridge is stepping into backstage at the Theatre Royal in Covent Garden. Most notable is Richards’ former Shaw co-star Allan Louis who is the perfect choice for the demanding central role. Louis’ performance runs from performative bombast and strutting confidence to aching vulnerability and deep-seated hurt with a detour or two to wildly famous Shakespearean text. It’s a rounded and lived-in tour de force particularly well suited to Louis’ natural grace and strong presence.

The material is rich but, structurally, the play is a little jumbled. The production jumps messily between timelines and makes confusing use of double casting, most of this burden falling on Amelia Sargisson who plays three different roles in two different times with three different accents and very little in the way of differentiating costuming. Luckily, the anchor of Aldridge’s emotional journey keeps the story grounded and the focus where it belongs.