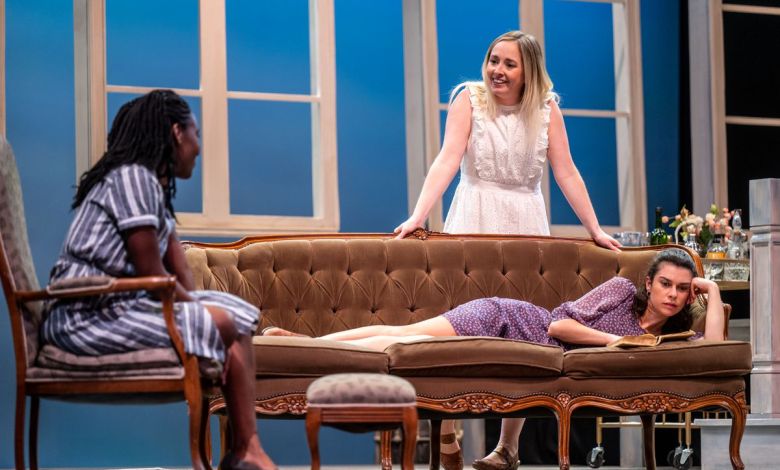 Chekhov’s works have a number of consistent themes, plot points and actions that have contributed to their overwhelming recognizability as a Chekhov work and Three Sisters is no different with themes around family home, history, slow decay, melancholy, family, love (with all it’s ups and downs), death (both emotional and physical), and stagnation. While this version has been updated and adapted by Paolo Santalucia to have more present day language and changing around certain characters to better represent our world, the core story remains the same. Three sisters in their family home with dreams of going back to the big city find themselves continually rooted in place in their small town as boredom, a yearning for freedom, routine and stagnation take their toll. It is a very appropriate play as we look back on those early days of the pandemic and cautiously look forward.

The strongest aspect of this production is by far the performances. Every performer in the ensemble brings something special to each scene, whether it be powerful, raw vulnerability or excellent comedic timing. The acting ensemble is incredibly strong and seeing this play for their performances is a must. Every scene can wildly change in tone from sweet to irritated to heartbreaking sorrow on a dime and every actor manages those switches both naturally and with extreme clarity. Both a testament to their skill/commitment to the role and the director for guiding these performances.

The production design is an impressive piece of work with the set capturing the house in the various states of its life in the play, representing the state of all its characters as it moves through time. Sound and lighting are also very clear helping to guide the narrative along. However, it is in the narrative that this production falters.

The updating of Chekhov’s text is an eye opener in how many of the playwright’s tropes and narrative habits have become at this point repetitive and predictable and at times downright exhausting. At a point during the show, a couple thoughts emerged, “Ok when are we getting the gun shot, when are we getting the scene where it is clear that the unfulfilled love will in fact never be fulfilled etc.” Three Sisters also continues another theme of Chekhov’s work of living heavily in melancholy and nihilism, with characters often repeatedly lamenting the dull stagnation and pointlessness of existence. And while that is not unrealistic to real life (i.e please see my early 2000s Linkin Park phase) it is also exhausting and constant to the point of almost being tedious. That actually did a disservice to the updated adaptation as modern technologies are talked about (if only briefly) but then dropped, which is strange as the implication of this show being in more present time would have meant there would be more tools (not available for when Chekhov originally set this play) for these characters to leave their toxic situations but again the modern tech was only talked about briefly so there was confusion over when this show takes place.  However, that is a small plot point that only emphasizes the overall critique that this adaptation would have benefitted from interrogating more of Chekhov’s narrative habits and really experimenting with them. Asking the text, “Wait why does this have to happen? Why can’t these characters just do this instead? Why does Chekhov usually have this happen and what happens if we play with it or even break it?” Particularly at this point in our community’s theatrical journey, this sort of experimentation and interrogation can continue to be fun and bold and exciting if we are to continue putting on works considered the classics and staples of North American Theatre.

Despite the limitations of the source material, this is still a beautifully acted play who’s adaptation definitely does a lot of things right with the updated text and is highly encouraged for everyone to see, but as theatre moves into the future, it is also time for these long running works to be experimented with more, interrogated more and bring in an increased sense of curiosity, risk taking and overall play.