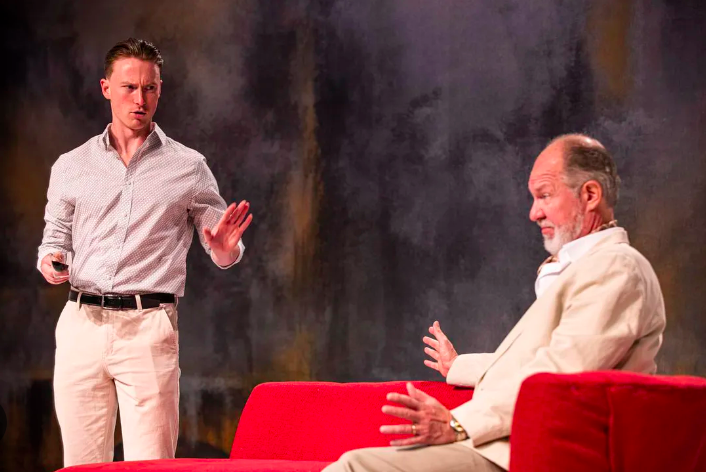 The success of Hannah Moscovitch’s new play Post Democracy largely comes down to wether or not Jesse LaVercombe manages to make you think he’s generally a somewhat okay guy.

The rest of the production is strong in less crucial ways. Teresa Przybylski’s stylish set has a cleverly critical total lack of character and is revealed with tightly executed theatricality in an opening transition that sees a mass of black nothingness transform into a polished hotel lounge in the blink of an eye. Rachel Cairns is an inspired choice for the tricky role of Shannon, her omnipresent gravitas and intelligence not only strengthening that supporting role but also second hand lending a little credibility to LaVercombe’s Lee. The always great Diego Matamoros plays outgoing CEO Bill with evocative exhaustion and an accompanying over-willingness to compromise. Mumbi Tindyebwa Otu’s direction is naturalistic but deliberate, using the utility of the set design to create a few impactful visual metaphors but never wavering too far from the play’s foundational starkness. Lisa Karen Cox’s intimacy direction stands out for its honesty and blurriness in a very complicated and well-played drunk scene.

The character played by Chantelle Han is the production’s low point, sometimes feeling a bit too wild in service of the play’s overall complexity at the expense of character complexity. An uncomfortable dynamic arises pretty quickly wherein Justine (Han)’s credibility is directly tied as an opposing force to Lee (LaVercombe)’s. It’s a bad faith false correlation, which is completely clear once you’re able to step outside the play and clear your head, but Moscovitch has set up a situation where clear heads aren’t much of an option. My blood boiled through the entirety of this play’s slim runtime, surely a feature not a bug, and the immersive quality of that feeling is what makes the play impactful.

The responses to Post Democracy have run an interesting gamut. It seems to me that those of us who fell for LaVercombe had an easier time embracing the play as a complex and ultimately effective torture device, a widescreen rumination on topics that hurt from all sides. Those who saw through him seem to see the play as a simpler criticism of bad behaviour in a place of privilege.  I prefer the play I saw, wherein LaVercombe’s easy charisma and seemingly honest emotional reactions allowed me a key inch of empathy that made everything harder to process. I get bored if it’s too easy to process. If you’re able to see Lee as generally a somewhat okay guy, his actions hit you harder and the criticism widens, the world of this 4-hander single hour one-act expanding to reflect so many more people and so much of their and our world.  That’s a weird amount of pressure to put on one actor but, at least for me, LaVercombe’s performance leads to the best version of Moscovitch’s work.