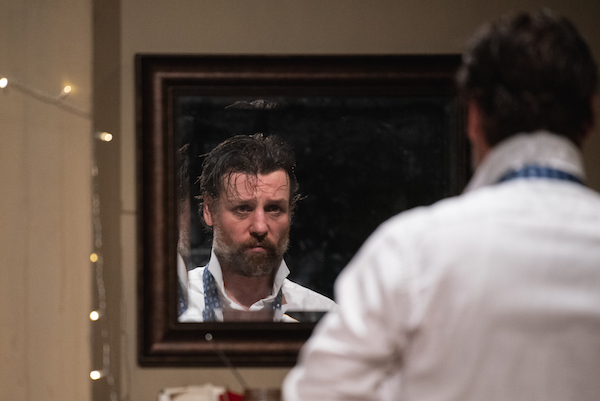 Running through Saturday at the Chain Theater in Manhattan (312 W 36th street), Maiden Productions’ take on Connor McPherson’s The Night Alive is phenomenal. Boasting a lights-out cast, visionary design, and accomplished direction, Maiden delivers an outstanding inaugural production and solidifies itself as a company to keep tabs on.

The Night Alive centers on Tommy (John Duddy), a middle aged man whose life is in a state of disrepair. Staying indefinitely in a room at his uncle’s house, Tommy drifts by on odd jobs and keeps his savings in a cookie tin. McPherson presents him as an avatar of Irish men of a certain age and class, but Tommy’s struggles and the themes explored are universal. The play is fantastic, and Maiden’s production brings it to life with unexpected richness and heart.

The cast is remarkable from top to bottom. John Duddy carries the show with striking vulnerability. Extremely watchable, Duddy is always grounded in his body and conveys high-emotion moments with nuance. Molly Ehrenberg-Peters (Aimee) turns in a staunch performance as the sex worker who finds herself in Tommy’s orbit. Ehrenberg-Peters’ wheels are constantly turning; Aimee’s quiet calculations are well-realized. That being said, I often yearned for her to find ways to give her character more agency. Haydn Harvey (Doc) is revelatory as Tommy’s simple friend who yields a satchel of stolen turnips and waxes poetic on the nature of the universe. Harvey is an excellent actor and a savvy physical comedian – he was an audience favorite. Veteran Lloyd Peters’ (Maurice) heartbreaking turn as Tommy’s uncle, who struggles with powerlessness in the face of strife and loss, is delivered with incredible finesse. Thomas Shuman (Kenneth) is truly menacing as a mystery man from Aimee’s past. Shuman never shies away from making strong choices and most landed well, though a few fell short of the mark.

One of the true stars of this production is Karen Loewy Movilla’s scenic design. The set is immediately compelling and the audience is given a clear idea, before the action even starts, what kind of character lives here. Tommy’s apartment is scattered with piles of clothes, Ian Fleming paperbacks, and cardboard boxes filled with detritus. Frameless posters are taped haphazardly to the wall. Appliances and tools are stored in seemingly random places. The set feels like a junk drawer come to life in the best way possible. And like someone’s junk drawer, organization follows its own logic and everything has a use. Important props live in those crumpled cardboard boxes. The posters on the wall come to life within the dialogue. Even the clutter on the floor helps sell one of the biggest moments in the play.

Director Kathy Gail MacGowan has a preternatural understanding of McPherson’s pacing. She is at her absolute best here when overseeing quiet moments. Scenes between Tommy (John Duddy), Aimee (Molly Ehrenberg-Peters), and Doc (Hadyn Harvey) bubble over with warmth and realness, guided by MacGowan’s shrewd hand. MacGowan is unafraid to luxuriate in the space between characters’ lines. She lets long stretches of silence help foster an intimacy between her performers and her audience. There is a sequence in the second act in which Doc hangs Christmas lights. What could have been a quick throwaway bit is, instead, drawn out and lived in. It becomes one of the most memorable scenes in the show. This is testament, of course, to Harvey’s performance, but also to MacGowan’s trust in her actors and in the power of the mundane.

The louder moments are powerful as well. MacGowan is able to capture a sense of real danger at the end of the first act and leaves the audience gasping for air into the intermission. That being said, it would serve the production to find a way to make key moments of violence in the second act just as visceral and jarring. Instead, the fight choreography is often both forced and tentative. The ending of the play is ambiguous as written. There is beauty in the unknown here, but I found myself wishing that this production had made clearer choices. As it stands, the vision of the final moments feels nebulous.

These minor flaws, though present, did little to dampen my overall esteem of this production. At its best moments, The Night Alive was transportative theatre. Maiden’s winning first project punches well above its class: had I seen this show on Broadway, I would not have been disappointed. The Night Alive is a triumph.