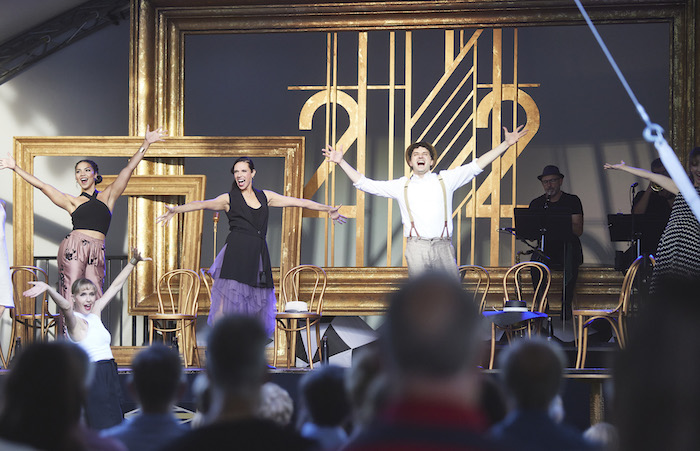 Outdoors At the Shaw: 1922 in Concert

Another hit from the Outdoors at the Shaw programming, this original narrative concert written, curated and directed by Jay Turvey is an unblinking and critical but ultimately joyful examination of where we were 100 years ago and how far we have (and haven’t) come.

The major events and artistic achievements of 1922 are chronicled through songs, scenes, and one particularly fun tableau sequence showcasing notable pieces of fine art, including the Group of Seven landscapes that are represented here by the beautiful grounds of the Shaw Festival Theatre. Designer Judith Bowden’s massive gold picture frames enable some really fun directorial moments for Turvey, including a standout sequence recreating scenes from Dracula featuring the always great Mike Nadajewski and Kristofer Bowman hamming it up, delightfully out of sync with the live line readings from cast members standing out of frame.

The strong cast is well showcased in a mostly balanced structure that sees the spotlight land at some point on each performer (though perhaps one more bit of business for the underused Shane Carty would be appreciated). Though in general the Shaw has made great strides at diversifying their ranks in recent years, this piece in particular feels lacking in performers of colour. Triple threats JJ Gerber and Olivia Sinclair-Brisbane break out as stars in this piece but it did feel as though only having the two of them held the production back a bit from being able to really explore a fascinating period in Black history. I would have also liked to see more representation of the Indigenous perspective since the piece does try to stay grounded in Canada as much as possible while telling the global story of 1922.

Perhaps a tad less entrancing than its fellow Outdoor programming, 1922 is nevertheless a fun hour well delivered with something to say and there’s always room for that.