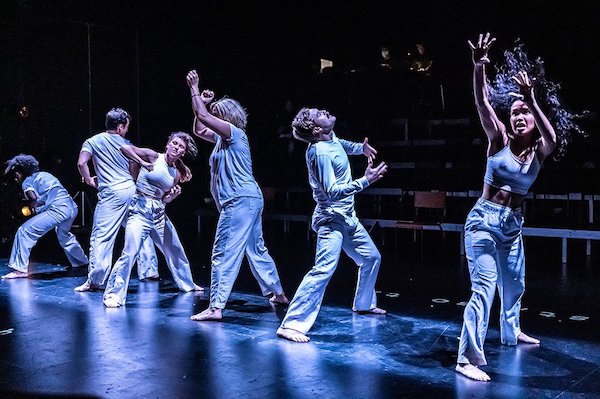 Commissioned by Peggy Baker Dance Projects, Beautiful Renegades tells the somewhat indulgent story of the company that came before Peggy Baker Dance Projects as they made a mark on Toronto’s limited dance scene in the 1970s. There are long sequences of contemporary dance adapted from actual works staged at the time spliced between scenes written by Michael Ross Albert attempting to stitch together a narrative about the people behind the work while walking an impossible line between deference and honesty.

The play’s most interesting thread (to me, perhaps understandably) is about the role of criticism from within a community. Albert captures some real truth here, examining with balanced reproval the harshness of publicly pointing out the flaws of others and the savagery with which said criticism can be privately punished. This subplot feels almost self-conscious within the confines of the commission. How does a playwright worth his salt tell an honest story about community heroes? For that matter, how does a playwright tell an honest story about his community? And it is his community. As much as Toronto’s dance and theatre scenes are separate, the dynamics of any artistic community follow similar patterns and there’s as much to recognize from indie theatre of the new millennium in Beautiful Renegades as there is of 1970s contemporary dance. The result is unfortunate tension that runs throughout the whole piece- every small hint at the dark side of how artists treat each other followed by a retreat to safer artists vs. the world territory. Albert isn’t empowered to knock these people off their pedestals, that was never part of the assignment. It’s hard to say whether the piece would be more satisfactory if he never even teased that possibility.

The cast is a testament to just how divided Toronto’s theatre and dance communities are. Most of the cast are dancers, very good ones. They have to be real dancers because so much of the play relies on the performance of the art the characters are fighting so hard to present. If they do not perform it well, the characters lose their credibility. But this is also a play and the dancers in the cast are not seasoned actors able to carry the complexity of their characters or the trip of Albert’s quickfire dialogue. The lone actor in the cast, Anne van Leeuwen runs circles around her costars in every scene. Her character suffers for her inferior dance skill but she carries too much of the story to sacrifice the acting side of the performance for that particular role. Jarrett Siddall, a dancer cast in the role with the least dancing, strikes the best balance of the two mediums but the general reality of the ensemble is an either or proposition.

The concept of Beautiful Renegades is a good one- a marriage of mediums, a recapturing of local history, a self-referential opportunity for allegorical introspection- but the high emotional stakes and tense community politics that make the subject matter so rich are the exact forces limiting the play’s potential.