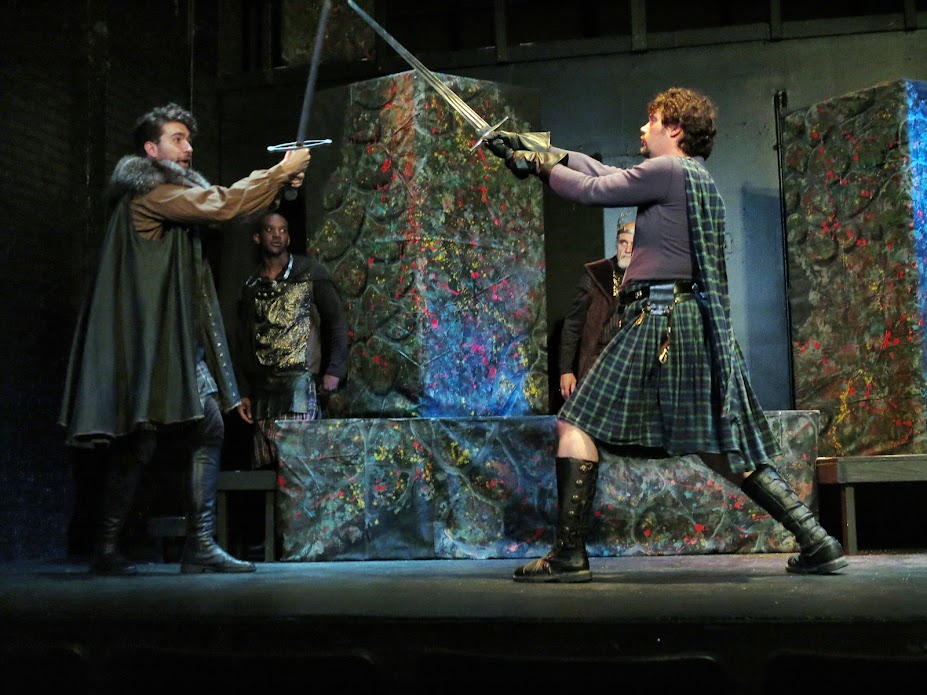 Renaissance Now Theatre & Film delivers a capable production of Macbeth thanks to its strong supporting cast and inventive staging; however, the potential of a “Redux” remains underdeveloped and its leads struggle to carry momentum.

What starts as a fairly standard interpretation of Macbeth breaks wide open in Act 1, Scene 3: Angus (a very likable Mason Tarwater) looks toward the audience and declares, “It goes without saying that we are the little guys.” It seems like the beginning of a fresh, exciting take on a 500-year-old play. Angus and Ross (Stephano Puertas) continue to jaw about disappointing leaders and the illusion of freedom, painting these lower-status characters as self-aware cogs in a greater political mechanism. I eagerly awaited to see how such deconstruction would continue to unfold.

Alas! No other moment of “redux” lives up to this initial turn. There are further setting-breaking asides from Angus and Ross and some witch scenes that drift off-book – including a few annotations that are laugh-out-loud funny – but what the first meta moment promises never comes to fruition. Even though I understand the hesitancy to make more-than-cosmetic changes to a text as sacrosanct as MACBETH, if one is going to make rewrites, then bolder cuts – and additions – are necessary for clarity of vision. And while the production wanted more annotations overall, there were some (including deciphering Lady M’s cryptic “babe that milks me” and rethinking Banquo’s murderer) that didn’t quite work in context nor add to the concept.

Missed opportunities notwithstanding, the production is carried by the proficient, if uneven, direction of Kathy Curtiss, who also adapted the script and serves as Artistic Director of Renaissance Now. Curtiss deftly transforms three cuboids covered in camouflage-like fabric into Cawdor Castle and Birnam Wood, thanks to resourceful staging and expressive lighting design. She adeptly manages a packed stage, and the production comes alive when the full cast is involved. Forays into the audience bring the action beyond the limits of the proscenium. Scenes of traditional Celtic dances are rollicking, and the musical sequences are evocative. Combat, too, works generally well: the fight choreography is strong, albeit occasionally under-rehearsed. When there are only one or two actors on stage, however, the play becomes static. In more private moments, it feels as though Curtiss has often left her actors to their own devices, which poses problems – especially for the titular couple.

Visually, the physical dissimilarity of the Macbeths works incredibly well: a hulking Macbeth (Zachary Ballard) gives singular context to the motivations and actions of a tiny Lady Macbeth (Mira Koecherans). That being said, neither actor fully mines that physical difference. More glaringly, neither successfully connects with the language, and we lose clarity because of it. Ballard seems to be an actor capable of considerable power, and his emotional explosions are often compelling; however, without a mastery of the text, his outbursts have a disconnected quality. Kocherhans is lights-out great in her final moments as Lady Macbeth, but she doesn’t create a commanding or consistent enough character previously to provide a stark contrast. In the actors’ scenes together, the stakes are never high enough. Even while committing Regicide there is never palpable danger or true rawness of emotion.

Certain supporting performances uplift the production. Marvin Payne (Duncan) is masterful. Oozing gravitas, Payne effortlessly connects with each word and elevates every actor on stage with him. His victory song is transportive. His Ghost is quiet and unsettling. Even his brief turn as Siward is subtle and fully-formed – and directly aligns with the themes examined by the redux. Anton Moss (Banquo) carries himself through every scene with depth and ease. I applauded his strong choices, even the ones I disagreed with. The signature laugh he creates – and then inverts post-mortem – is downright chilling. Olivia Caspar (Hecate) brings an otherworldliness to her scenes; Adam Argyle (Macduff) never feels out of the moment, especially when confronted with personal tragedy; and the chemistry between the aforementioned Angus and Ross is great fun to watch.

Flaws aside, there are nuggets of a great re-interpretation here. Whether it be another iteration of this redux or something new, I am interested in following Kathy Curtiss and the rest of the Renaissance Now Theatre & Film team’s next project.