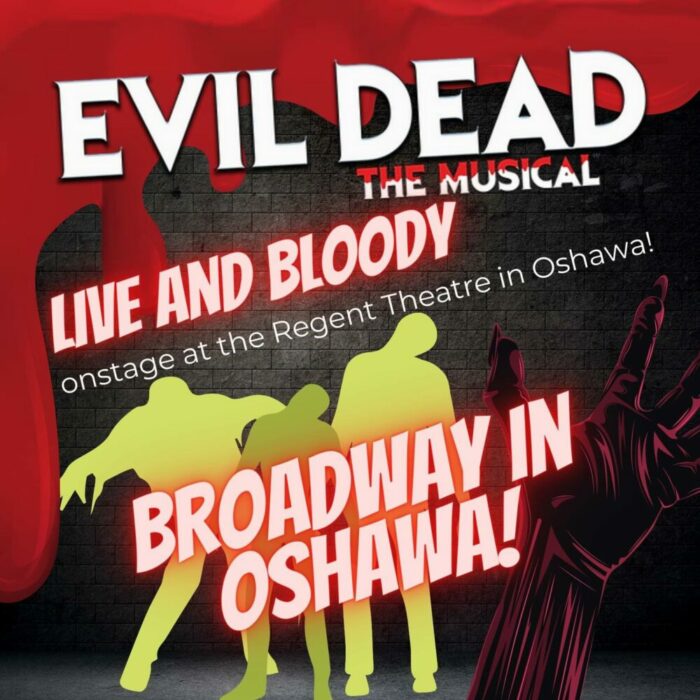 Out of Town Theatre Report: Evil Dead in Oshawa

Onstage at Oshawa’s Regent Theatre for four days only, this thrice-postponed iteration of a homegrown cult hit is a shaky attempt at commercial theatre production with community theatre limitations. I admire Mansfield Entertainment’s concept of bringing large-format theatre to a community that could use a serious arts infusion and the professional designation should mean that the artists are being paid for their work, something that there isn’t nearly enough of for early-career professionals.

There is a reason that nearly every serious theatre company in Canada is a not-for-profit. Commercial theatre is nearly impossible outside of locations with huge tourist numbers and it’s even harder without the capital for established talent and long runs that can grow with word of mouth and prompt return visits. For a commercial producer to succeed in this market, they’re likely making programming decisions based on affordability and marketability rather than quality, and compromises will absolutely be made in casting and production costs. And that would all be fine, except that the one true mark of a commercial theatre is the ticket prices. The cheapest ticket available to Evil Dead is $45 (the splash zone will cost you $80). Especially in a community without very many other options, it’s upsetting to see theatre priced so out of line with the quality of the product.

Which is not to say that director/designer/producer Zachary Mansfield’s production is terrible. All things considered, his directorial and design work is serviceable if a little shaggy. But Evil Dead the Musical as a text is lazy and dated, a goofy gimmick that could maybe be fun with much bigger effects and the tightest execution in triple threat history. While this cast is competent and energetic, there’s a limit to what they can do when the adapters were more interested in adding insulting jokes than character development. The women in particular have great voices but very little to sing and leading man Marc Ludwig is reduced to playing a sort of pan-Fillion hero, pausing for dutiful applause at every famous film line. It is very possible to make a big goofy stage version of a populist film, it’s been done many times, but there needs to be some reason for the material to exist in its new medium beyond it being fun for the first two rows to get squirted with blood.

The performances are all pitched very high as though the cast has been given the instruction that it’s their job to communicate that this is a parody but it’s the few moments of sincerity that actually land the best comedy. An Amos Hart-style missed spotlight joke brings the house down in a standout number about underdeveloped characters, because the moment has actual human emotion behind it. It’s hard to imagine that the show wouldn’t be well served by a little bit more well-founded fear or anyone caring for even a second that their friends keep dying. Production-wise, the performances could be smaller and the effects much bigger, the sound quality could improve ten-fold, and everyone needs to annunciate more and/or shriek less. But the singing is good, the dancing is fine, and more or less the company delivers at a standard local theatre level. A very reasonable $20 ticket level.

It’s really all about expectations and value. Evil Dead the Musical is being marketed as “Broadway in Oshawa”, which is just not what it is. I appreciate that Mansfield Entertainment is striving for more but this is community theatre level work and the audience should be prepared for that.