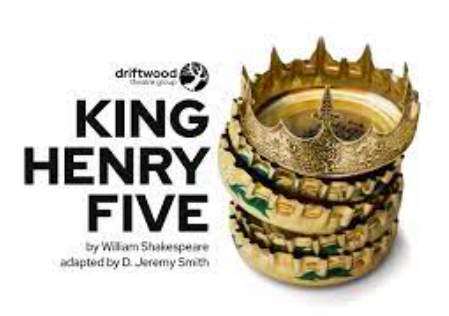 After a 2 year hiatus from writing reviews due to the pandemic, I was welcomed back by Driftwood Theatre’s Bard’s Bus Tour opening performance of King Henry Five. In keeping with the past few years, it was fitting that the show did not go off without a hitch. Due to weather conditions, the performance was forced to make a quick pivot and was moved last minute from the historic Parkwood Estate grounds in Oshawa, Ontario, to Knox Presbetyrian Church just down the road.

Despite being packed into the pews of an un-airconditioned church in the sweltering heat, the audience was jovial and chatty while waiting for the sold-out show to begin. We were greeted by musical director Kelsi James who, along with Germaine Konji, wrote and composed all of the songs we were to hear throughout the performance. She provided the audience with a content warning related to the scenes of drinking, violence, and death that would occur throughout the show and asked the audience to hold space for those folks that may be feeling uncomfortable or conflicted inside the church setting. There was a thoughtful land acknowledgment and a call to join with the cast as we gather once again to share stories together.

Henry Five is an adaptation of three separate Shakespeare plays, Henry IV Parts One and Two and Henry V. Director D. Jeremy Smith makes a point of saying he is not an historian and although these plays include some historical events, his focus was to tell a story of, “Family. Community. Love. Responsibility. Honour. Legacy. Time.” The play begins with a father lamenting his scoundrel son and wishing he was more like another, more honourable man (that may or may not be so honourable, indeed!). A classic theme, but it just so happens this father is King Henry IV (Richard Alan Cambell) and his son is heir to the throne of England. For his part, Harry/Hal/Henry V (Ben Yoganathan) is confirming his father’s fears by holding court at the local tavern, the Boar’s Head, with friends Falstaff (Hume Baugh), Poins (Ximena Huizi), and Bardolph (Rosalie Tremblay) and mischief does ensue.

The small cast is diverse and talented. Many performers take on the role of multiple characters and are well-matched in their roles. That is all except for Ben Yoganathan who takes on the pivotal role of the Prince of Wales/King Henry V. Yoganathan’s depiction of the carefree prince turned burdened king is an emotional journey worth taking with him. I enjoyed the fresh take on traditional roles provided through this adaptation of Shakespeare’s work. For example, Quickly (also played by Cambell) is more traditionally known as Mistress Quickly. For those of us unfamiliar with the original work, the role was played so naturally you would never assume it was any other way. The cast approached other characters in the same way, calling into question gender norms and approaching relationships, both platonic and romantic, in new and thoughtful ways with authenticity and care.

The set and costuming are not fussy or fancy, but do relay the ideas in the story in an amusing way. Characters go “undercover” in dark baseball caps and sunglasses, rob others in Storm Trooper masks, and go to war in old football gear. Nobility is differentiated from others with a simple sport jacket and a throne is an old metal chair set atop a picnic table. Quick changes were made on the spot in this stripped down production that was built to move from town-to-town in a van.

The highlights of this production were the musical interludes. Musical director Kelsi James worked with composer and lyricist Germaine Konji to create a musical element that worked to weave the scenes together lyrically and further share the overall themes of the play. Rosalie Tremblay, the main vocalist, was excellent. Throughout the show Tremblay was accompanied by James on acoustic guitar. Songs about who we are, where we come from, and how we can change or stay the course resonated throughout the church. The songs were obviously written for this historic play, but the themes and lyrics are relevant as we navigate these tumultuous times too. My only criticism here is with the one kind-of, sort-of “rap” song. It didn’t work as well with Tremblay’s vocals or delivery and lacked the impact of the rest of the soundtrack because of this.

Since I am discussing sound, I do have an accessibility note for others attending. I attended the event with my mother who wears hearing aids due to hearing loss. She struggled with the sound on a couple of levels. With her hearing aids in, she found the sound too loud. With her hearing aids out, she was unable to hear the actors clearly because they spoke so quickly. I do understand that the show was moved at the last minute and the sound may have been set for an outdoor venue, so this may not be an issue for others attending outdoor performances, but it is something to consider.

Overall, King Henry Five is an interesting and modern take on three classic Shakespeare plays. Audience members from the very young to the old all seemed to be captivated. The show runs a full two hours with an intermission, but the action is paced well and there are many opportunities to laugh at the follies of the various characters (especially Falstaff!), as well as relate to them on a deeper level as they try to come to grips with the roles that they play in certain events and the consequences of their actions on their personal relationships and beyond. King Henry Five will be touring extensively in Ontario this summer making stops across the GTA and beyond. I would recommend finding a performance in a city near you, grabbing a lawn chair or blanket, and taking your favourite Shakespeare fan (or foe) to enjoy this wonderful production. This is a PWYC production with an option to purchase reserved seats, so it is accessible to all.