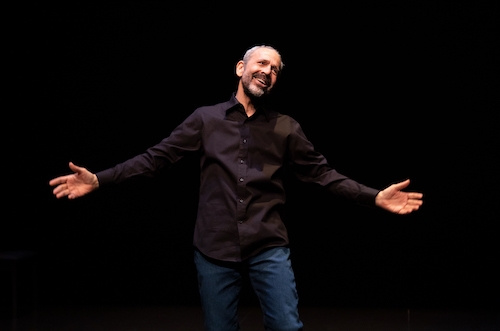 When you announce you have cancer, nobody quite knows what to say. Veteran Toronto director, writer, and performer Daniel Brooks has heard it all from would-be wellwishers whose missteps become his cautionary tales but the problem runs deeper. It’s Brooks’ problem more than anyone’s – he has a difficult story to tell and perhaps just one chance to tell it.

Audiences and reviewers struggle too. Faced with the looming inevitability of someone’s death, it’s easy to look for a neat story that offers the consolation of closure. If Brooks had spent these precious months traveling the world and ticking boxes on the proverbial bucket list (a cliche he hates so much that, he insists, he would rather vomit into that bucket), his tale would be more exciting and simple. Instead, Brooks ventures into small-town Quebec for a ten-day meditation retreat. Anyone hoping for this to deliver deep insight about the nature of the universe or one’s own mortality is quickly disappointed. Instead, we join Brooks as he approaches this chosen ordeal with a restless mischief and works through his annoyance with a silent cast of unknowing villains, from Fast Walker to almost-roommate Tony Small.

Brooks doesn’t avoid the profound – his daughters’ attempts to process his diagnosis with him (while dutifully returning his calls now) are touching and his cryptic allusions to a lost love leave the audience wanting more – but these moments occur when he wants them to or when the character Daniel Brooks’ stream of consciousness happens upon them. This holds back the performance in some ways – Tony Small and friends are finally unmasked as real, rich human beings when the silence is broken and there’s no reason left to care about them – but it’s a useful reminder that we don’t get to demand convenience from reality. Brooks is cursed with this story and won’t get to change its ending but still controls how he tells it – and it’s a treat to watch one of Canada’s finest storytellers rise to that task.