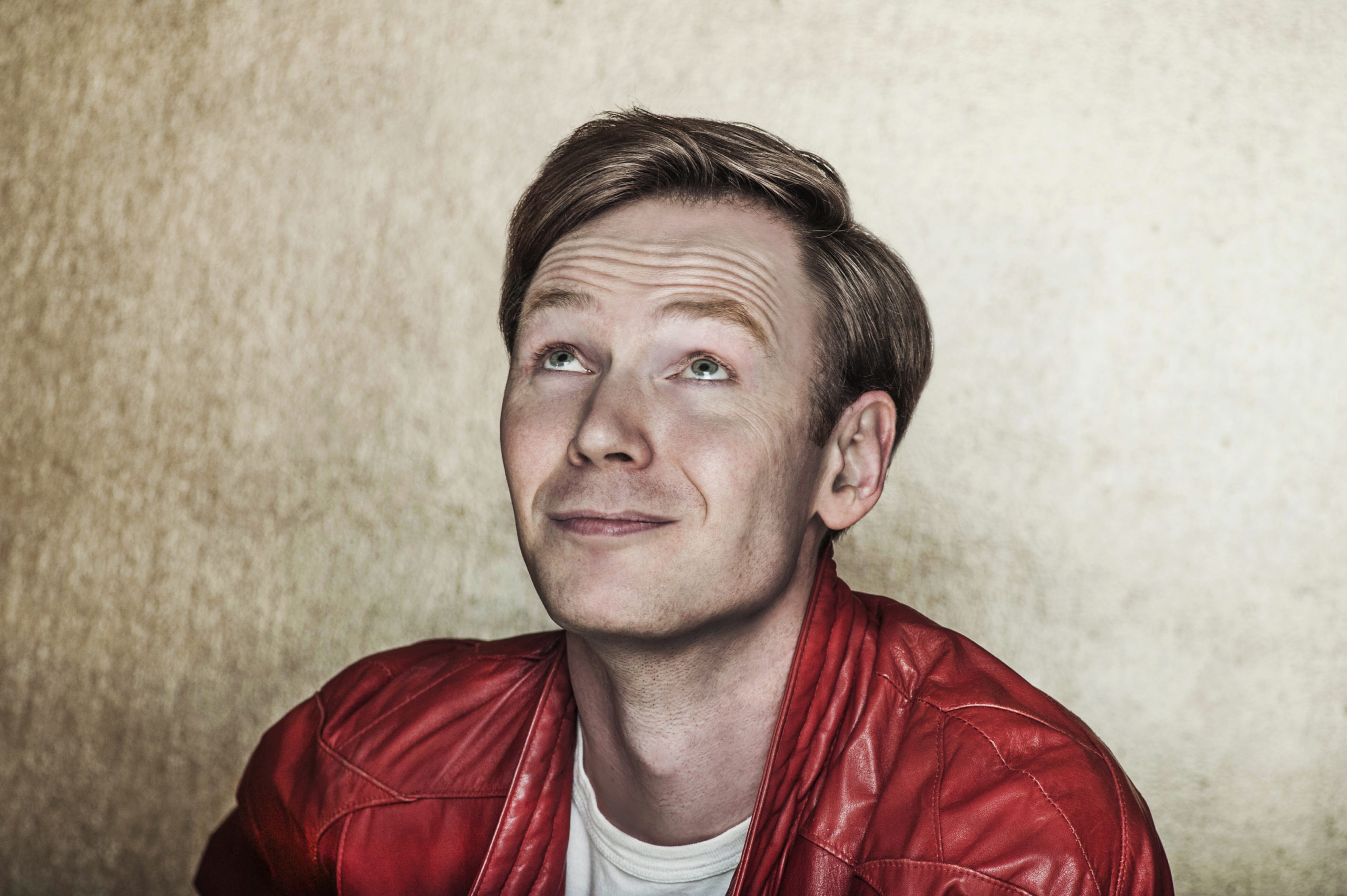 Our last night out reviewing theatre in 2020 was spent at Comedy Bar seeing six pieces at the Toronto Sketch Comedy Festival. The best of them was the incredible first solo effort from Anders Yates. Over the years, we’ve seen Yates perform excellent team sketch and improv, traditional scripted work, and even some stand-up comedy. But his solo sketch show topped them all, putting a perennial team player front and centre without any backup to really show what he can do. He is this year’s winner of the Outstanding Solo Performance award.

We last interviewed you back in 2019 for your Kinsey Fail nomination. Give us a quick life update since then.
Quick life update! Not a lot has changed, except for the whole world and my place within it, of course. It’s hard to think of any more interesting changes than the one we’re all living through, but I guess the most relevant thing in terms of this interview was my decision to pursue solo sketch comedy.

Speaking of Kinsey Fail, thanks for the “I knew her when” bragging rights that come with that review now that Priyanka’s a Drag Race winner. This is not a question, I just wanted to bring it up.
I feel that exact way about Priyanka too! Pri, if you’re reading this, we had something once! Call me!

You’re a regular contributor to The Beaverton. Do you have a favourite article you’ve done for them?
Back in early 2019, when Brooke Lynn Hytes was the first Canadian contestant on the original American Drag Race, Maxime Bernier made some really awful comments on twitter comparing drag to blackface, so I wrote an article with the headline “Maxime Bernier emerges as this season’s shady bitch who loves drama”. I loved it because I got to pretend that all the federal party leaders were queens on Drag Race, which is a much more fun way to look at politics. So much of what I write for The Beaverton is just me processing my political feelings through comedy, so it’s nice when I get to write something that has nothing to do with politics, like the article “Health Canada warns that vaping fuckin’ sick”.

You’ve also been doing a lot of teaching with Bad Dog. What are some of the challenges of teaching improv? Especially online!
Teaching improv is a job I really enjoy. Everybody comes to improv for their own reason, so I think the biggest challenge for me is to try to allow for experiences that will address all the different things that brought everybody to that class. I was terrified to teach online when the pandemic hit, but I was really surprised by what a smooth transition it’s been. I find the biggest challenge is that the technology doesn’t allow for eye contact. You can have a room full of people and nobody knows who anybody else is looking at. At the same time, I’ve tried to embrace the ways in which online teaching has handed me a new type of sandbox to play in, and there are things that I see my students do to play with the framing of their video or proximity to the camera that simply aren’t possible on stage.

You’ve done some standup but SketchFest was your first solo sketch show, we almost always see you as part of a team. What made you decide to go out on your own for the first time?
I love sketch comedy, and I’ve had a wonderful time doing sketch and improv in various groups, but I think I started to get more particular about the way that I express my voice. I think I just wanted to find a way to do a sketch show that was completely my own, where I wouldn’t have to negotiate getting anything in or keeping anything out, but also where I wouldn’t have to plan around anybody else’s schedule. Standup is a fun and interesting way to take ownership of my voice, but there’s something I miss about the character and world building that you can do more easily in sketch than in standup.

What’s your writing process like when you’re starting a solo show? How is it different from writing a group sketch piece?
The writing process isn’t actually all that different in the way that I write solo sketch vs a group sketch piece. I just try to develop as many different ideas as possible and find ways to test them out to see which ones work. I even tried to keep some key elements of my work with my troupe Uncalled For, in terms of linking all the sketches together so that they would flow into one another.

How did your SketchFest material develop; what were some of the sketch ideas that didn’t make the cut?
One of my favourite pieces that didn’t make it into the show was a sketch where I played Tanner Zipchen, the guy who did the Cineplex preshow. I used to go to the movies a lot in the before times, and I found the tone of those clips that they run before the previews start to be so ridiculous, so I had a lot of fun playing with that style of speech and writing, but then slowly making it more absurd. In the sketch Tanner Zipchen gradually starts sending secret messages that only one audience member can hear, explaining that he is a traveler from another dimension, and then it continues to get more bizarre from there. Just a couple months before sketchfest Tanner Zipchen got fired from Cineplex, and I was like “Does this mean I have to cut this sketch?” Ultimately I don’t think him getting fired really affected the sketch at all because I’m the only person who was paying that close attention to his employment status, but the sketch went to such incredibly weird places that it just didn’t fit with the tone of the rest of the show.

Every time I’ve seen you post about or mention your solo show, you’ve brought up your director. What were some of the most important ways Dan Jeannotte helped to shape the piece?
I bring up Dan every time I talk about this show because I’m so grateful for all the help he gave me. Dan was my sounding board for all my ideas, my confidence-booster, my editor, he took care of suggesting or creating all my music and sound cues and offered jokes in places where I needed more than what I had. He’s the person I trust in comedy the most, and best of all he’s really fun to work with.

Did you have a favourite moment in the show?
It’s hard to pinpoint any individual favourite moments from the show. I really like getting to interact with the audience, since that’s the part of the show where I allow myself to improvise. When I’m following my script, I’m really following it closely, so I like being able to slip into such a different energy when I get to the parts where the script disappears. Just like with any show my favourite moments are always the ones where the jokes are landing and the premises are working and the audience and I are connected.

Do you plan to return to the solo format? Is this show likely to have a second life?
I had every intention of continuing to perform this show beyond the Toronto Sketchfest, but when live theatre became impossible, it also felt equally impossible to make plans for the future of the show. I got commissioned to make a taped version of one of the scenes from the show, but I really crave being in front of a real audience again to feel that exchange of energy in real time. I hope to find a way to do this show in front of people again eventually.

One of my favourite virtual projects during quarantine has been your show for Bad Dog TV based on The Circle. What’s that experience been like?
I’m really glad you’ve enjoyed The Oval! That show has been really great to produce and direct because it has been such a reliable weekly part of my pandemic experience. Back in January of 2020, before the pandemic, I was enjoying watching this reality show about people not being able to leave their apartments, spending all day alone on social media. I saw a way to steal the format and make it work for an improv show, and we did one single live performance on stage at Bad Dog in February 2020. When Coko Galore was launching Bad Dog Comedy TV, she invited me to adapt the format to an online show, and I actually think that the online version of the show is better than the stage version (maybe because of how much The Circle was already accidentally about quarantine). Now every week I just get to watch my most talented friends make jokes in a format I stole from Netflix and somehow I still get credit!

What are some of the other ways you’ve been keeping busy during Covid?
Finding new ways to keep busy during COVID has been tricky, but I’ve done my best to do some writing and watch oodles of tv.

Do you have anything you’d like to add?
I have nothing to add! I just want to thank you for the Critics’ Pick Award and for this interview!