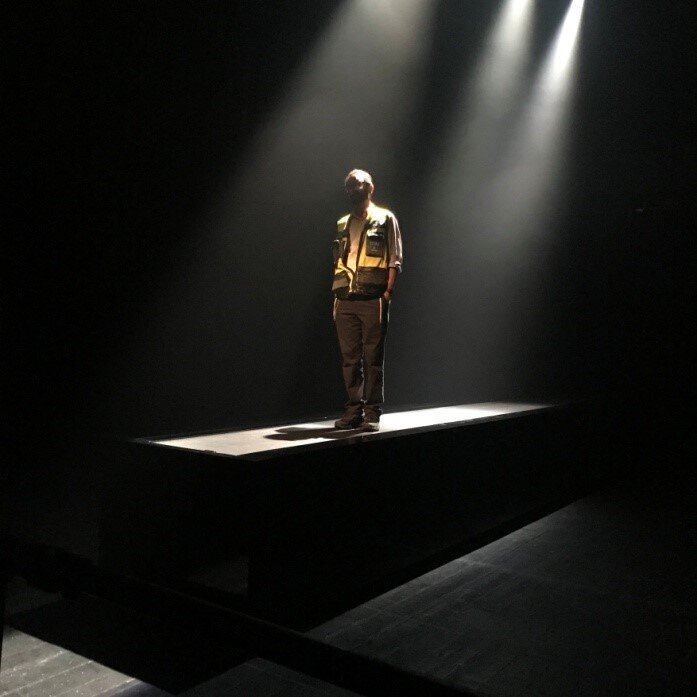 Now the fact I was wearing a heavy sweater probably added to this, but I exited out of The Runner (Human Cargo Productions, written by Christopher Morris) just absolutely sweating. I was exhausted by this play, but I would see it again and again. Directed by Daniel Brooks and the sole role of Jacob played by Gord Rand, this is a play that tackles a plethora of heavy topics and easily balances them all with the help of a treadmill.

Yup a treadmill, aka the most boring piece of equipment at the gym. It is used to great effect with Gillian Gallow’s set design and it fits the title well. Jacob is a member of Z.A.K.A a team that works in retrieving the bodies and assisting with putting them back together of those killed in Israel. Sometimes it is from violent actions and sometimes from accidents. It is a job (to which the members don’t get paid) where you are on the run all the time. Running from incident to incident. So, a treadmill is a great place to set the action and prevents the pace of the play from being too stale.

Jacob is a dedicated member of the Z.A.K.A team and at this point in the organization’s history is also trained in CPR. His position however in the team and community is compromised after his assistance of one that others in his community would deem the enemy. That act of kindness he gives. That act which is in line with the oath he took to do no harm. That act which serves to remind us that the simplest of acts when placed into situations and locations filled with social discourse, become much more complicated than they are meant to be.

Gord Rand’s performance is strong due to many factors but one that sticks out is his sheer endurance. As he struggles to remember his own story and make his case before an unseen entity, he is constantly at the whim of the treadmill which switches speeds and forces him to either remember faster or grants him the mercy of a slower pace. We get the sense of something struggling to maintain control and maintain sense of the situation. It is stressful to watch but it is also heartbreakingly beautiful especially during moments where he recalls just the most basic feelings of peace and kindness.

The entity seems to sit in judgement of Jacob, and it is bolstered by lighting design (Bonnie Beecher) and sound design (Alexander Macsween) that seems to attack Jacob and refocus him when he becomes too chaotic in this story telling. Almost as if to remind him who is in control. It is an effective/organized lighting and sound design thought I would be interested in seeing more variations of the cues and how they can change as the story progresses. This is to say I did feel this is one part of the production that could benefit from more experimentation and variety.

If there is one thing on my birthday list, I wish to get this year it is for sure the play text itself. Christopher Morris’s writing is one where you can tell the research has gone in. You can tell the homework has been done. The political and social discourse is presented with confidence and the moral/social dilemmas that become more complex when you add in said discourse are engaging to listen to and think about. It is heavy topics with no easy solutions because the solutions have been so muddled by humanity’s own anger at each other that it makes you want to scream. It can make one feel like they are just running on a treadmill struggling to keep up but ultimately going nowhere. Even when the treadmill kicks you off, it is still going to run.

This is a play that draws you in relentlessly and encourages questions to be asked and challenges your own endurance. This is not an easy walk in the park piece because of how far it pushes the hard topics. However, that is what makes this play so successful. It pulls people in and makes them go at the pace the piece chooses and makes sure that they are getting the information and the work that Christopher put in. It is exhausting like a long hard run on a treadmill, but I would encourage people to make that run.