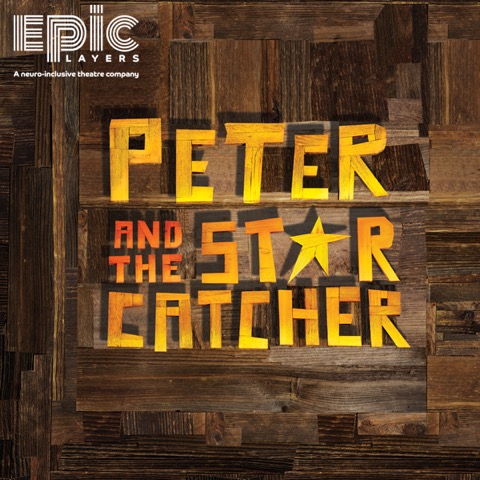 Little did I know what a truly magical and inspiring experience I was in for coming to HERE Arts Center on a cold winter night. This was my first time attending a performance by EPIC Players, “a nonprofit, neuro-inclusive theatre company dedicated to creating professional performing arts opportunities and supportive social communities through the arts for persons living with developmental disabilities”. However, this was not my first time seeing a performance of Peter and the Starcatcher. On a visit to NYC in 2012, I saw the Broadway production at the Brooks Atkinson Theatre. I remember enjoying the fun whimsy of the show but also had the feeling that something was missing that I could not quite put my finger on. This production by EPIC Players filled the empty space the Broadway production left for me.

Peter and the Starcatcher, a play by Rick Elice with music by Wayne Barker, is based on the novel by Dave Barry and Ridley Pearson. It is essentially a Peter Pan origin story – Peter Pan Begins, if you will. We follow the intrepid Molly Aster (portrayed by endearing Jordan Boyatt) and her father, Lord Aster (Preston Burger). The Asters embark on a mission to deliver a chest of magical star-stuff for the Queen of England to the island of Rundoon. Lord Astor will travel with the chest on the mighty ship, The Wasp, while Molly is to take the presumed safer route aboard The Neverland. Unbeknownst to them, pirate hijinks ensue – complete with a decoy chest, classic switcharoo, and a pirate takeover of the ships! Not to mention a group of orphans, (played by the enchanting Nick Amodio, Whitney Blythe, and Miles Butler) stow away on the ship to be gifted to the King of Rundoon as snake food! A whimsical journey of bravery, friendship, love, loyalty, and absolute hilarity follows. A highly enjoyable adventure for all ages.

When I say everyone in this production is amazing, I mean everyone! They, along with the smooth direction of Travis Burbee and the creative props design by Wells Thorne, do an outstanding job of bringing the audience into their collective imagination as a plunger becomes a sword and a ladder transforms into a crocodile. Part of the magic is that you can feel the true passion and teamwork that went into this production. The energy is contagious! The comedic chops of this cast really shine in Gianluca Francesco Cirafici as Smee and Kylie Hogrefe as Alf. Max Baudisch as the mis-pronouncing, mustache-wielding pirate Black Stache, originated on Broadway by Christian Borle, made me forget I was in a small off-off Broadway house with his larger than life performance. It would be neglectful of me to mention comedic chops and not mention the scene stealing Whitney Blythe as the ever-hungry lost boy Ted, who had the audience in stitches with every line.

EPIC Players is a truly inspiring theatre company. It is hard to describe, but the energy in the room felt so cohesive. Everyone working together, uplifting one another. It is what an ensemble show like Peter and the Starcatcher calls for. It fulfilled what was missing in the Broadway show. It is what we need more of in the world today. As part of their commitment to neuro-inclusivity, the programs include a Sensory Accessibility Guide providing a scene by scene breakdown of potential triggers such as lighting effects and loud sounds. I hope other theatres take notice of EPIC’s accomplishments and in turn work to make theatre more accessible to all. If you cannot make it out to this show, I implore you to check out what is next for EPIC Players and mark it on your calendar. I know I will!