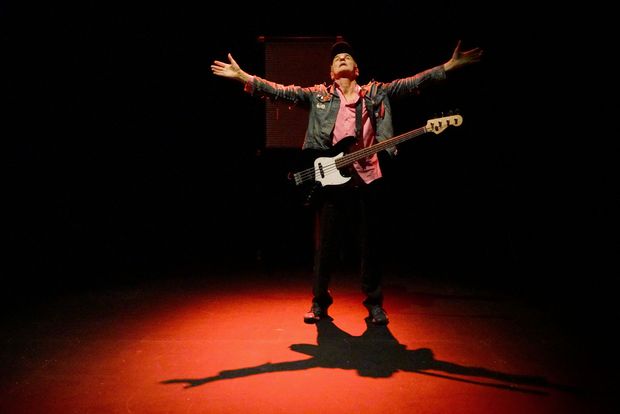 There is no doubt that when Daniel MacIvor enters the stage, he does so with seasoned confidence. He appears a bit agitated while dressing the stage, a picture here, a nice scarf there, perhaps even pandering a bit to an audience that is eating it up, quick to laugh at his antics. The mood shifts as he becomes cranky, less pandering as he begins to give a hint of a controlling perfectionist anger, and the veil between performance and real life gets uncomfortably thin. I find the shift disquieting, though audience members around me continue to laugh.

As the story gets going, an early vitriolic outburst at an unseen unnamed stage manager who got a lighting cue wrong primed him to tell off an audience member whose phone went off, a particularly offensive breach of theatre etiquette, though never one done on purpose. His decision to direct a burst of anger into the audience, screaming “turn your fucking phone off” while glaring down the culprit could have been planned and I am only 98% percent sure it was not, as he circled back around to it later in his dialogue and then offered a cheeky and on theme apology before exiting the stage after his curtain call. And if it was not planned, if he truly did scream profanity at an audience member who had forgotten to turn their phone off… well, it reminds me of a Twitter thread I read a while ago where one woman shared the raw-scared-for-her-life fear she feels when men raise their voices around her, and then many other women shared that they too feel this unnerving panicked fear when yelled at by men. As the old adage goes, men are afraid women will reject them, women are afraid men will kill them. Anyway, maybe MacIvor could make a different choice around this next time.

The theme of a woman rejecting a man weighs heavily on this story. The protagonist, Peter, is bequeathed an unpublished memoir in which he is occasionally mentioned. Peter reads aloud from the memoir, offering rebuttals and pained clarifications as we learn the author is his estranged birth-mother. Peter has a damaged psyche after living a life of abandonment. When he rages the emotion boils over from a desperate need to control his environment and circumstances, due to a lifetime of instability. He is searching for purpose and identity while recounting the tragedy of his life through the memories and words of someone else, reconciling his own memories of a broken childhood with the romantic musings of her glamorous life.

Peter is begging to be seen, to be legitimized, and to have a purpose. It takes a lot of people to prop one guy up (MacIvor says as much in his program notes), but we don’t always have to opportunity to acknowledge and thank them. The story of Peter and MacIvor’s performance was gutting, doing what theatre does so well, revealing the most raw and vulnerable aspects of the human condition.