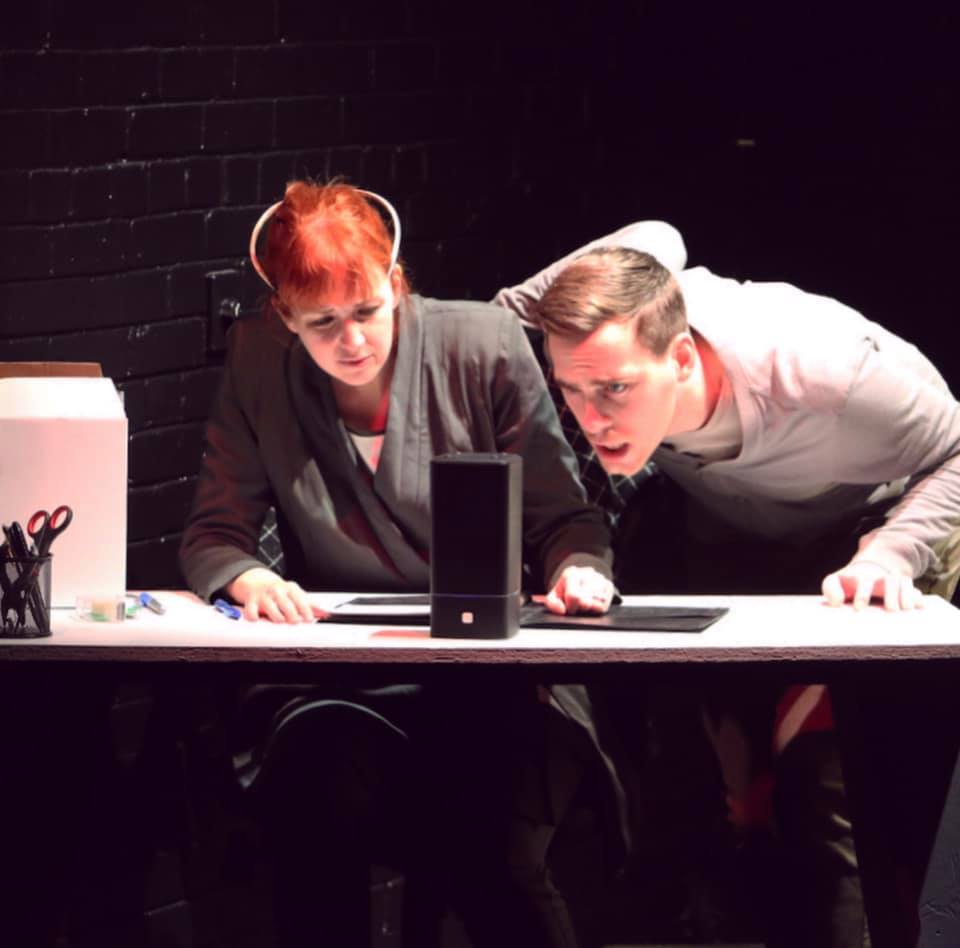 Strong design elements and performances give Girl in the Machine, written by Stef Smith and directed by Will King, a solid operating system to run this story of addiction with technology being the drug of choice but encounters some narrative bugs in the execution of this program. (My editor never said I couldn’t make computer puns).

Polly (Madryn McCabe) and Owen (Alex Clay) are a couple struggling with some work life balance issues. Notably Polly, who is a lawyer constantly barraged by emails, contracts, cases and a plethora of situations that go with the job. Owen gifts her a new piece of home technology known as a Black Box (voice work provided by Sappho Hansen Smythe) to help her relax. Before long Polly becomes addicted to the soothing power of a machine which begins to cause nationwide destruction and chaos. Polly’s journey into addiction is a singular example of the power of this box and it is in that addiction journey where the show shines.

We see Polly go through the stages of addiction from the first taste, to the routine, to the Moby Dick journey to defeat her addiction, to the relapse and so on and so forth. Will King’s sound design is almost overwhelming in the technological sounds beeps, music and whirs that give the Black Box life. This barrage of sound succeeds with great effect in painting how alluring and overtaking the Black Box is. The lighting design by Chin Palipane makes each moment where the Box’s abilities are put on display stand out with strong transitions and switches and a particularly potent use of red that would make one rethink that whole red pill/blue pill scene from the Matrix (for the record I am team blue pill all the way). Sappho’s voice as the Box also draws similarities from devices such as Siri and Alexa in a very creepy way that would make us all question our Virtual Assistants.

Keeping all the action in Polly’s and Owen’s apartment (cleverly designed by Stephen King as something out of a very contemporary home décor magazine) means that we get to spend a lot of time stuck in a space where exhaustion, under appreciation and general burn out provides the perfect breeding ground for addiction and the performers have a natural chemistry that makes the destructive effects of addiction on oneself and their loved ones clear and painful.

However, when the narrative moves outside of the topic of addiction is where bugs and glitches begin to appear. Interesting topics about technology and its effect on employment and the general chaotic nature of humans are brought up but dropped and I found myself craving to see more of the Black Box and the effects it can have rather than listening to philosophical discussions of society. The themes of technology and addiction are two vast and complex topics with a variety of subtopics underneath them both. For a show to try and tackle this many of them in under two hours is admirable but does lose sight of the main message and ultimately makes some of the dialogue feel superfluous in the artistic goal of the piece. In addition, several moments in the addiction journey feel glossed over due to time skips and fast pacing that don’t always let stages in Polly and Owen’s downward spiral breathe enough. In particular, an unfortunately timed scene transition in the climax of the play causes the narrative to lose a lot of energy and urgency.

Further development and future productions of this piece would benefit by focusing more on just one or two aspects of addiction and technology, giving the journey of those aspects more time to breathe and develop in front of the audience, having the Black Box be more present in scenes and keeping up the urgent and dangerous energy of addiction, especially in the climax.

Overall, Girl in the Machine is a tragic story that occurs across the world. The worst part about the addiction in this piece is that the addictive substance itself doesn’t completely overwhelm and seduce its consumers but, like addiction as a force, it simply takes advantage of the pain that we and a society hell bent on running us into the ground do to ourselves.