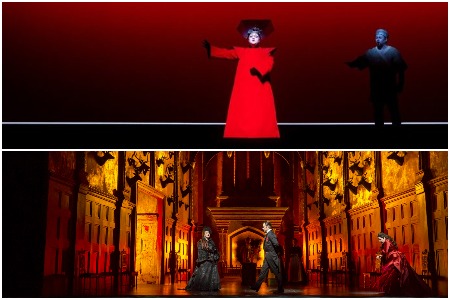 The Canadian Opera Company has set out a delicious 2019/20 season. I have been excited to see Turandot since last fall when the upcoming season was released. Knowing little about the particulars of storyline, I anticipated seeing Puccini’s work, in particular that glorious piece “Nessun Dorma” with excitement and high expectation.

I knew still less about Rusalka, other than its fairytale influences (Hans Christian Andersen, not Disney), and its own famous aria, “Song to the Moon”. As the date for both of these shows approached, I became eager to see these modern conceptions. I was also appreciative of the darker dramatic works being onstage at a time of year when we are already beginning to think of cold nights, magic, and possibly a witch or two.

Written in 1924, Turandot is set in China, at a time when creating the characters in a cliché of Chinese culture was viewed as expansive and intriguing, and not offensive. In this new and modern conception of the work, Robert Wilson updates and contemporizes stage, costume, and characters. The three comic characters in the performance, originally (and problematically) named Ping, Pang, and Pong, are the commedia dell’arte stock characters of Venetian theatre. Wilson retrofits them into modern slapstick characters named Jim, Bob, and Bill. I understand the sentiment here, but the racial problem of Turandot has swung too far to the other side in this modern production. The set and costumes are creatively reworked into stark modernism, nearly into black-and-white. Movements are minimized, the stage is mostly blank. While there are some absolutely stunning moments in the performance, such as our first look at Princess Turandot and the closing scene, the overall performance falls flat. The modernizing is too much. I lost the passion and feeling. The performers’ voices are stunning, sailing to the rafters, but the staging does not support them. This Italian opera filled with love and longing becomes more of a dreamscape in 2-D. One of the few things that kept my attention were the three originally problematic characters, whose energy and humour bubbled life into the performance. I appreciate the tactic, but the modernization of this production of Turandot lost the show its vitality.

A perfect companion for a dark October evening, Rusalka fills the audience’s minds with otherworldly powers. This production is the antithesis of Turandot from the week before: sets are massive and looming, costumes dripping in jewels, and there is even a perky set of prosthetics (sidebar- they were wonderful and superbly effective). Large-scale and flamboyant, Rusalka is in no way over-the-top. The sets enhance the feeling and effectiveness of the performers and the storyline. Sondra Radvanovsky, playing the role of Rusalka, ties her physicality into her watery set at the opening of the show with perfection. The costuming of the fearsome mermaids is unsettling and effective, and it truly feels as if she is struggling through mud, weeds, and dark water while longing for the life and love of a human. In this performance I must also commend the Chorus and auxiliary characters. The nymphs, ballet dancers, and crows added a brilliant amount of whimsy and talent to the show. While just as long as successful, a whopping 3 ½ hours, Rusalka is a joy. It sparks such feeling, magic, and was a complete success. Onstage until October 26, it is a wonderful way to get in the mood of witches, goblins, and passionate weeping beneath the light of a full moon.