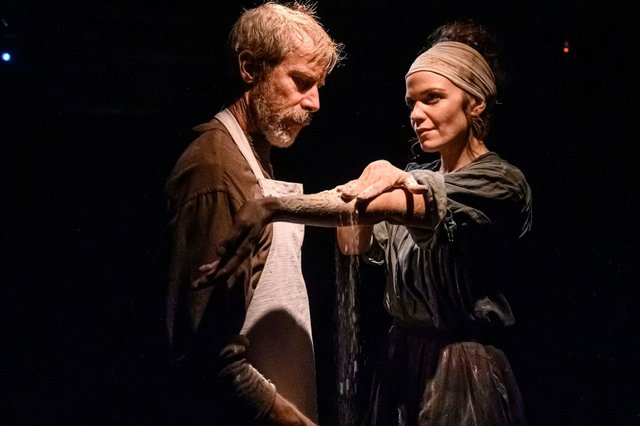 Knives in Hens at the Coal Mine

The Coal Mine’s presentation of Knives in Hens is a beautiful rendition of the mid-nineties play written by David Harrower — Director Leora Morris has skillfully and lovingly brought the Scottish work to Toronto in a way that captures the audience well for the 80 minute production.

A small farming community’s characters know little more than what dominates their life – sun, earth, horseflesh, God – but one ploughman’s young wife is awakened almost accidentally by her husband’s offhand remark when he likens her to a field. The bewildering statement sends her on a runaway train of thought – how could she be a field if she is a woman? How could she be anything but who she is, and how can she be more than the ideas that God puts in her head?

Easily swayed by common ideals, and previously unaware of the ties that tether her to her husband and her old ideas of her world, the young woman begins a journey of empowerment and self-discovery that spurs her toward the town pariah, the lonely widower miller. He is reviled and feared, and yet she is drawn to him with a passionate magnetism that she cannot ignore. As she explores language, the thirst for self-expression and the power of giving names to the things in her world, she also learns about the darker side of language and the power of deception.

The Coal Mine was a beautiful indie venue choice, with the audience on either side of a straw and dirt stage. A huge vertical millstone serves as a fantastic set-piece and a pivotal part of the action. Diana Bentley is subtle and physical in a superb iteration of the Young Woman, while Jim Mezon’s gruff Pony William serves as a roughened, masculine balance of energy. Jonathon Young (of Vancouver’s Electric Company Theatre) channels Gilbert Horn the miller’s magnetism in spades, to make for a very tight trio of players.

Sensual, philosophical, and simple all in one fell swoop, it’s not wonder that the beloved Knives in Hens is still played almost 15 years later — and this version has captured the spirit of Harrower’s original vision with gusto.