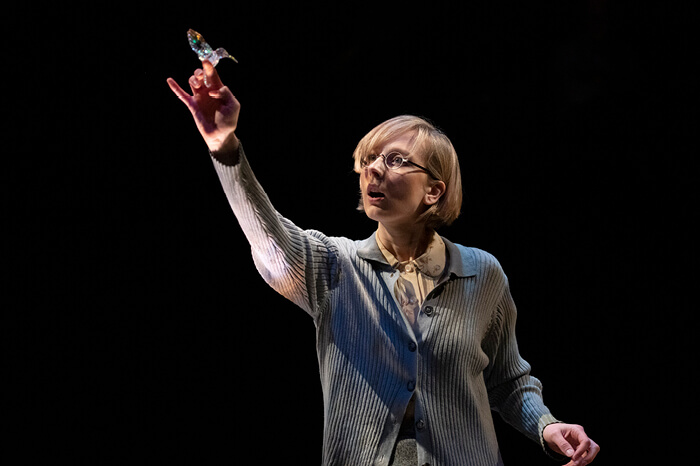 In Tennessee Williams’ extensive canon, The Glass Menagerie stands out as the original “memory play”: the work is framed as the hazy recollections of the main character, whose reliability as a narrator is an open question. Williams uses this to issue an invitation to actors and directors to fill in and flesh out those memories as they see fit, giving each Menagerie a particularly individual character. Every director’s note finds some significance in the play’s clear echoes of Williams’ biography but its resonance is a result of the unfortunate commonality of the family dysfunction it portrays so painfully. All too many viewers would see their own pasts in the mirror missing from the empty stand in the Wingfields’ cramped quarters.

This effect is felt strongly in Laszlo Berczes’ evocative production at the Shaw Festival. The set does great work here – the Wingfield apartment is a time capsule of unwillingly modest 1930s life and the in-the-round staging gives the audience an intimate view of a family at war with itself. We feel trapped as Tom does – and as one suspects Laura does – by their domineering mother Amanda and in desperate need of some reprieve. When Tom escapes the boundaries of his cell for a cigarette – or to sneak off “to the movies” – it feels like he is joining us for an all too brief moment before his inevitable return to domestic misery.

The script relies on carefully balanced dynamics between the characters to carry the day and this cast mostly delivers. Allegra Fulton steals the show as failed matriarch Amanda – compelling, pathetic, and crucially not wholly unsympathetic. It would be easy to lean fully into the character’s flaws in order to have fun with the role but Fulton’s Amanda is tragically and authentically human too. We would hate to be stuck with her for longer than the two and a half hours we signed up for and we understand Tom’s bitter resentment towards her but we are still moved by her struggle with her inability to fix the wreckage of her own life and the damage it inflicted on her children.

The role of Laura is really two roles – the housebound mouse who shies away from human contact and the woman she could be as seen in fleeting moments with Jim. A Laura can be convincing in the first but struggle with transitions to the second; Julia Course handles this well, revealing a Laura that we can believe was dormant and suppressed this whole time. Jonathan Tan’s Jim is a star student at his night school classes in public speaking – he introduces and handles himself with a politician’s polish and it’s no surprise that accolades were showered upon him in school. Tan makes it clear that, beneath the facade, there is a kind and sincere figure who earned and deserved his popularity rather than falling into it via some accident of birth. If it’s unconvincing that he might return her affection, the issue is less with the performance than the fantasy inherent in the role. Their reintroduction, against the backdrop of Amanda’s caterwauling, is pivotal to the script’s success and Course and Tan put the necessary work in to see it through. The ostensible main character, Tom, can feel like a distraction at times; Andre Sills does what he can with some muddled direction.

Shaw’s Menagerie is a generally solid offering that is elevated by a truly memorable performance by Fulton that makes it worthwhile even for those who have visited many a Menagerie before.