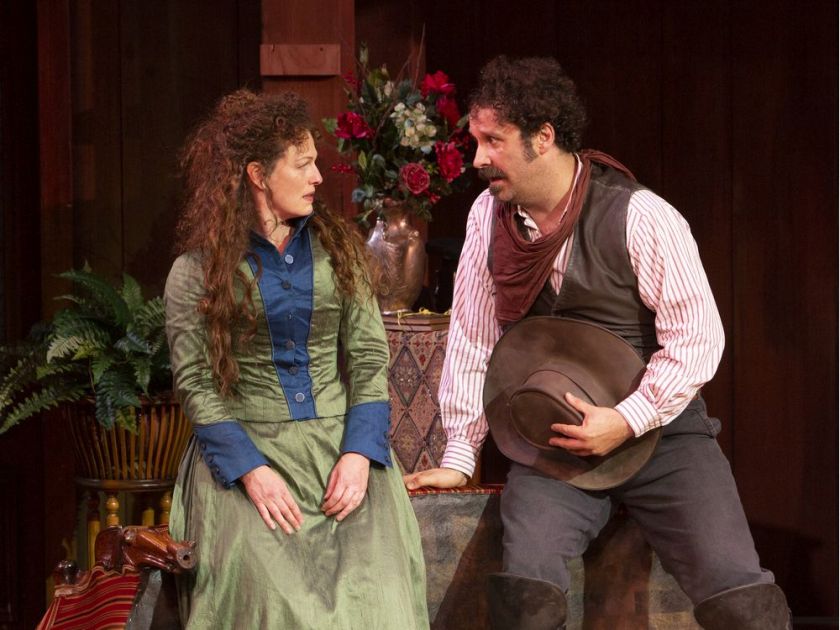 Out of Town Report: Bard on the Beach’s Taming of the Shrew in Vancouver

Spaghetti Western is a popular approach for Shakespeare’s most controversial comedy (in fact this production admits to being inspired by Miles Potter’s earlier version, which was itself reminiscent of an early Stratford production by Tyrone Guthrie). The inherent Italian-ness of the storytelling (characters with names like Lucentio and Biondello on commedia dell’arte-esque misadventures) and the dated toxic masculinity of the themes pair to make broad cowboy antics an appealing tone for Shrew.

In Lois Anderson (a former Kate)’s directorial interpretation for Bard on the Beach this season, she makes pointed use of her chosen setting’s wild west lawlessness and city/country contrast in a thoughtful subtextual commentary on civility. Her “Padua City” is a place full of fancy dresses and dreadful behaviour where citizens scream insults in the streets and a manipulative brat in the form of Kate Besworth’s deliberately infuriating Bianca is considered the height of desirability.

Born and bred in this cruel, rude world comes our heroine, an outspoken bullheaded insubordinate marvel with a mane of wild curls and a devilish grin that could power a city far more advanced than Padua. Her name is Kate but every time she walks onstage she’s greeted by a raging chorus shouting “shrew!”. It’s an extreme manifestation of the community’s abuses towards Kate that have always been present in the text but it’s a necessary inescapable reminder that facilitates Anderson’s tricky act five revision. There are a few important elements of The Taming of the Shrew that need to be altered, or at least dramatically reframed, to justify staging it in 2019 when its blatant misogyny is, hopefully, too much for even the most backwards of spectators, act five and Kate’s big final speech being first among them. The way the ending is reinvented by Anderson left me with a massive smile on my face, which is something Taming of the Shrew in no previous incarnation has ever managed to do.

Of course it’s not just a risky rewrite of that final scene that’s needed to make Taming work. Turning the tables on the concept that Kate has been “tamed” is important, as is the important humanizing work that any great Kate does to combat the assertion that she’s really a “shrew” at all (honestly, name me one cool chick who isn’t; you’re no one ‘til someone calls you a bitch). Jennifer Lines is a brilliant Kate- fierce and funny and misunderstood by every person she meets, except one. She boldly doesn’t pretend that Kate’s wholly innocent and really goes after her scenes of bad behaviour, but she roots all of those moments in a place of hurt, defensiveness, or realistic hostility. When a moment of happiness happens for Kate, it’s impossible not to rejoice with her because her joy feels so hard-won and it breaks your heart to see her fear that it may be fleeting.

But perhaps the biggest challenge of any contemporary feminist Shrew is the love story. The text is the text, even with judicious cuts and small modernizations like those Anderson employs, and it’s a tall order to ask a modern audience to root for a love story with essential beats like “he’s after her money”, “he ruined the wedding”, “he puts her through terrible living conditions”, and “they fight constantly… with more than just words”. There are some specific, observable choices made by both director and actors that help fight the audience’s understandable cynicism about any sort of happily ever after for these two. The brutality of the Padua community creates an us vs. them mentality that fortifies Kate and Petruchio as a team. Anderson also reassigns a few key lines to balance the power dynamic and shift the relationship’s confrontational nature from strictly abusive to merely fraught.

But ultimately I couldn’t tell you how Andrew McNee won me over to Petruchio’s side, he just did (as a lion-haired shrew myself, I’m never not rooting for Kate; Petruchio’s the one with work to do). Kate and Petruchio’s first meeting plays like fireworks in this production and both actors beautifully wordlessly communicate the thrill of sparring for the first time not just with their equal but with someone who completely understands them (this particular magical feeling I think is best explained by stealing a line from Hamilton– “it’s Ben Franklin with a key and a kite”). From that scene on (it’s II.i so pretty early), the rest of the production was screwed over a little because I ceased to care about anyone in the world other than Kate and Petruchio (Anton Lipovetsky is a very fun Hortensio but everyone else was just kind of there).

Every tumultuous thing to come sits atop that foundation of here are two people who, whether they’ve fully processed this reality yet or not, like each other more than they like anyone else. From there, McNee plays every moment with utter sincerity, always turning to Lines’ Kate with a look in his eyes that somehow explains away every weird move and iffy line as if we might not understand why or how but he’s doing all this for her. The fact that I trusted him in that motivation when the text (the middle acts of which are some of Shakespeare’s weirdest work) doesn’t quite support that reading is nothing more or less than a testament to McNee’s captivating authenticity and unmanipulative charm. He does things like wink at Lines more than I might consider normal but, while this may come off as slick or ickily flirty from another actor, what McNee communicates is a conspiratorial sense of “we’re in this together, I got you”.

A lot of what goes down in Anderson’s Taming of the Shrew has little to do with what’s actually on the page. This is a blatantly doctored version full of massive text changes and character interpretations that are totally at odds with what the characters actually say and do in both the original script and even at times in this one (there’s nothing to be done about the weirdness of that wedding scene no matter how sympathetic your actor is and how much subtext you throw in). It’s also worth criticizing that all the secondary action is so underwhelming. But honestly who cares. This is a 400-year-old play that you’d have every right to suggest doesn’t have any value being staged in 2019. But, from the clunky, problematic fossil that is The Taming of the Shrew, Anderson has carved something worthwhile. So it looks a little different, a lot had to be thrown out to make something pretty from a mess of a play, but Bard on the Beach’s Taming tells a triumphant, honestly romantic, truly feminist love story and just because it’s different doesn’t mean it’s not better.