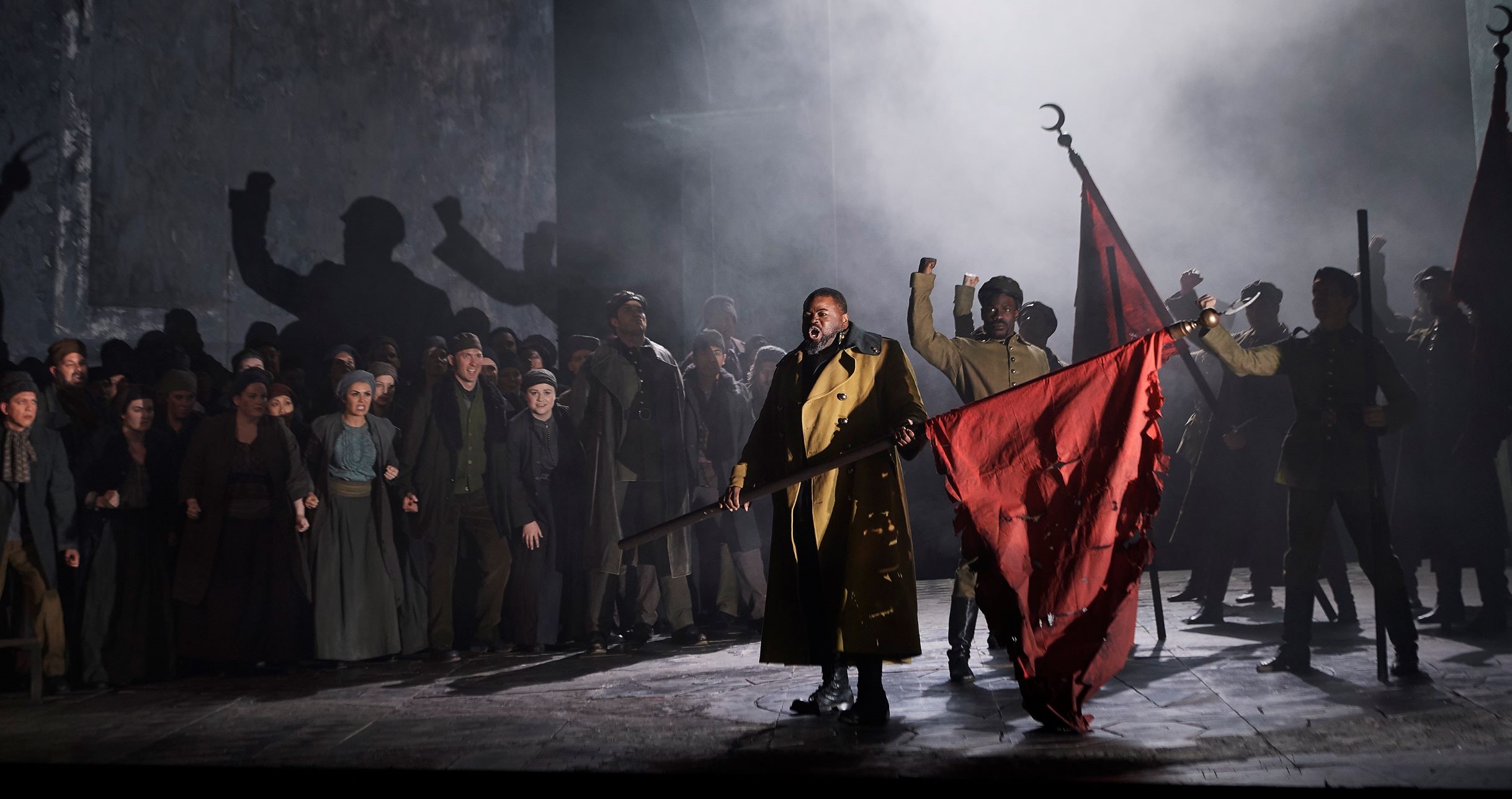 The Canadian Opera Company’s production of Otello is passionate, bleak, dramatic, and nearly everything one could want from an opera. Based on Shakespeare’s tempestuous tragedy, it is far from a comedic opera one might imagine with giggling maids, young lovers, and sets dripping with brocade and jewels. The set is modern and stark, a creative way to draw the production into contemporary times. Although quite a lengthy evening, the production draws the audience in, easily bringing us to the war torn shores of Cyprus. We follow a man who finds himself performing increasingly hateful acts to spite those around him as he continues along what he sees as a loveless life.

The opening scene of the performance is one of the most dramatic and effective moments of the evening. We begin not with an overture, but jump straight into music and song swelling together. The ensemble of the Canadian Opera Company (COC) is all onstage, sheltering from a storm and watching a seaside battle. I am impressed with the skill and the impact of the ensemble throughout the evening. An incredibly talented group, they add to the tapestry of the evening, whether singing from on or offstage. Light and set design complement the group well, demonstrating shattering lightning to great effect. The modern production, from towering sets of rock walls to the pale blue lighting, is echoed in the costume design. Dark fabrics are displayed in military structure as well as peasant garb. Our eye is drawn to the one character in flowing lighter colours, the victim and heroine of the story, Desdemona. Throughout the evening, she changes into a flowing robin-blue dress, reminding us (and likely trying to remind her untrusting husband) of her Virginal qualities. Commendations to everyone in the production department of this show, as it can be difficult to translate Shakespeare into something relatable to more modern audiences.

For example, the narrative centers around a soldier, Iago, who gets passed over for promotion by General Otello. Iago is overtaken by his bitterness, and then conspires to ruin a series of lives, meddling in others’ business to change allegiances and passions. It’s difficult to understand how one person can cause so much pain and hurt. After inspecting and ruminating, perhaps Iago’s motivations are meant to be a mirror to some of us in society: how truly unhappy and mean people can spiral and pull everyone around them down. This modern staging of Otello aims to bring themes as this to the forefront, rather than focusing on some of the more antiquated aspects.

Unsurprisingly, the cast of Otello is dreamy. Huge voices and personalities grace the stage, and create believable relationships between characters. I especially love seeing a dramatically passionate show such as this in the Four Seasons Centre, as the acoustics are so wonderful that you can hear the ragged, passionate breaths from someone weeping onstage. I was impressed by the talent of the cast of leads and their skills to perform in the most unusual of positions. Sometimes the choreography called for bizarre and awkward positions, and the performers always managed to shine through, even if they were singing while lying on their stomach. I was struck by their dramatic skills as well, especially in the third act when Tamara Wilson (Desdemona) is really able to let her anger and passion shine through in her character.

Overall, the COC’s production of Otello is a success. Supported by talented people in all aspects of the creation, the end product fills the audience with fear, anger, and passion. I look forward to the next shows and season from the COC, and am proud to support so many wonderful and Canadian performers.