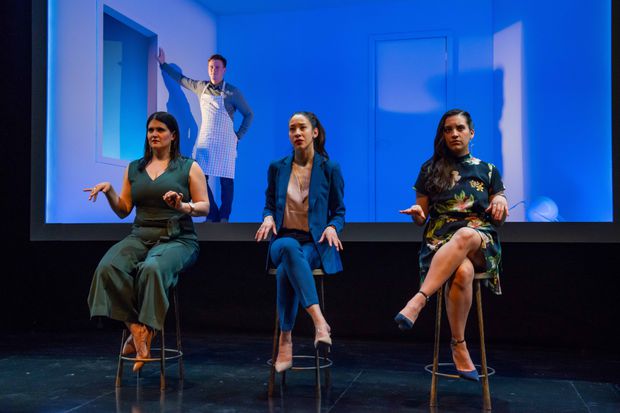 Beautiful Man at the Factory Theatre

Initially staged at SummerWorks in 2015, Erin Shields’ Beautiful Man features Jennifer, Sophie, and Pam (Ashley Bottling, Mayko Nguyen, and Sophía Rodríguez), who perch on stools facing the audience. They chat about their favourite show featuring a woman detective who investigates violent crimes targeting beautiful young men. They gush over her darker side – she’s edgy and has ‘issues’ (read: a drinking problem) while also being ‘independent’ and ‘troubled’ (read: she ignores everyone in her life, including her adoring fiancé). At the end of her day, the cop sits down to watch her favourite show, a fantasy medieval drama about families clamouring for the highest throne.

Gillian Gallow’s striking set features a raised stark-white room behind the women, in which Jesse LaVercombe plays the Beautiful Man, occasionally punctuating the conversation a few words (“Hi.”) or striking a dramatic pose.

The idea is obvious: this is a parody of those who wax lyrical about cop dramas and Game of Thrones, from their banal glorification of the protagonists’ toxic behaviour to their defensive rationalization of the misogynistic violence.

Andrea Donaldson’s direction effectively captures the flow of the women’s conversation, keeping our interest throughout. Yet while in the original production the women mimed lifting weights, Donaldson has them half-heartedly mime elliptical machines and other (often inscrutable) movements which are downright amateurish while frankly unnecessary. (We get it, the women are acting like men. Less is more. And, on that note, this first half would benefit from some cuts.)

Despite these flaws, Shields’ play offers an intense and significant experience. There were several men in front of me who were unresponsive throughout – not clapping or laughing along with the audience. It’s not clear if they were unimpressed or simply uncomfortable with the content, but the discomfort itself is the point. The women are funny because they are at once deeply familiar and yet grotesque: we don’t want women to be able to speak like this, the point is that no one should. The play might feature women objectifying men, but do not mistake the fact that this show is about the male gaze. If men are made uncomfortable by this production, it’s because it reflects back the ugly side of masculinity.

One major revision to the script is the addition of a final monologue, performed by LaVercombe, narrating the inner voice of a woman walking home alone at night past a group of drunken men. The monologue parallels the first half but with more emotional depth: it is uncomfortable but powerful in the mouth of LaVercombe, exactly because men never speak like this. And because no one should ever have to.