Do you remember your first experience with theatre or dance?
My mom was an actress/writer before she moved on to other things in her career, she taught community workshops and made feminist theatre about strong female characters pushing through in life to be heard. I was the “on-hip” baby brought into these spaces and there is a part of me that thinks I absorbed the energy of these stories and conversations … and that those early experiences have influenced and informed the kinds of movement based works that I make and choose to be a part of.

Tell us about your background and training in dance and in theatre.
I grew up on the West Coast and started dancing at 3, I found interpretive dance around the age of 11 where creativity and collective creation was brought into my awareness. From there I wanted to make my own dances and explore my own stories in conversation with other artists. So often, as a young dancer, I couldn’t relate to the stories I was being asked to tell and I wanted to create opportunities for my voice, and other underrepresented voices, to be highlighted. I pursued dance at York University where I was also exposed to other disciplines like theatre, film and visual arts – all forms that continue to inform my creative process and one of the many reasons why I love working between disciplines.

Who on the Canadian dance scene (or elsewhere) inspires you, why?
There isn’t one specific person, but I am constantly inspired by the surge of women of colour who are making work (not always in the limelight) that is political, radical while also being tender, moving and relatable. This reminds me of a Nina Simone quote “You can’t help it. An artist’s duty, as far as I’m concerned, is to reflect the times.” I whole-heartedly believe this, practice this and am inspired by others engaging and creating in this way.

Can you tell us a bit about how your collaboration with Natalie Sappier came about? In what ways did Sappier’s storytelling inform your movement vocabulary?
Natalie and I came to work together quite serendipitously. She was looking to collaborate with a movement based artists and someone had recommended me. She looked at my work online and felt something – so she reached out. When I read her script for the first time, listened to the music and saw her visual art I was automatically inspired and fell in love with her evocative image based story telling. Her words have movement, her paintings are rich with imagery and her voice hits you at your core. I felt inspired by the many possible ways to interpret her work and bring her words, paintings and music to life through dance. When we met, there was an instant respect and admiration that we shared for each other – I think She is an incredible artist with a voice that I believe in. I was intimidated to take on her point of view but found so many ways to relate to what she was sharing that intersecting my own identity into the work felt natural and easy. 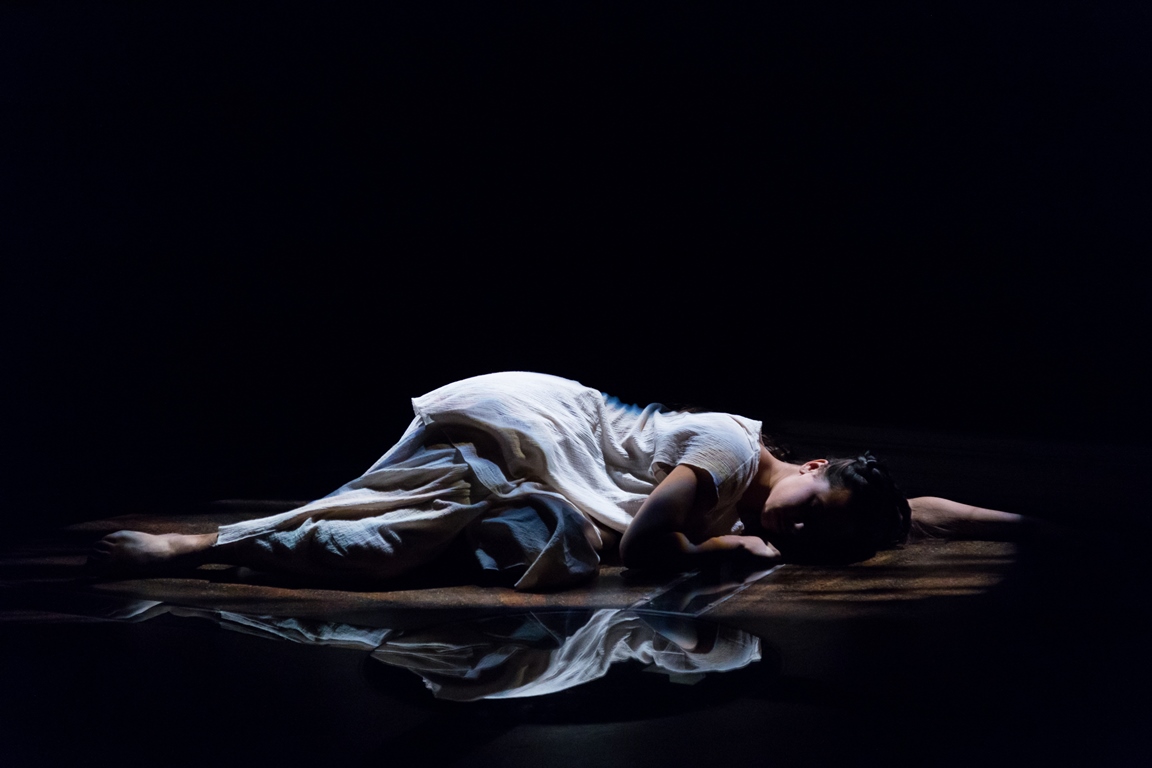 The set for Finding Wolastoq was organic and textural, literally layered with meaning, were there any aspects of the set that was particularly meaningful to you?
Andy Moro, the set designer, was in studio with us from day one of our development, so the set was built and created in conjunction with the movement. One of the most beautiful discoveries for me was drawing in the sand. Natalie came in one day with chalk and with one effortless sweep created this beautiful mural and with the offer of sand (a natural element, so connected to water – a big theme in the work) it felt like this moment was honouring the contemporary voices, stories and teachings that Natalie is sharing.

Another question regarding your performance space; your built stage was unusual in both shape (round) and size (small), in what ways did you adapt your movements or storytelling to the space, and what then was the relationship between the physical performance space itself, and the story you were telling?
Because the creative team was all present from the beginning of developing this work, each choice informed and influenced the other. The image of a circle was an offer to honour the significance of what circles can represent; cycles, medicine, equality etc. I never felt inhibited by the space, instead it felt like a world that was built around me, to support the story telling and evoke deeper meaning in the underlying narrative.

What are you working on now/next?
I am currently working on my first full-length work with my personal company; The Go To Company called In The Abyss. It goes up this fall and looks at the idea that we are all made of stardust and draws parallels in how our universe came to be in existence and how we live our every day lives.

Do you have anything you’d like to add?
I would like to acknowledge the team that collectively brought this work together;