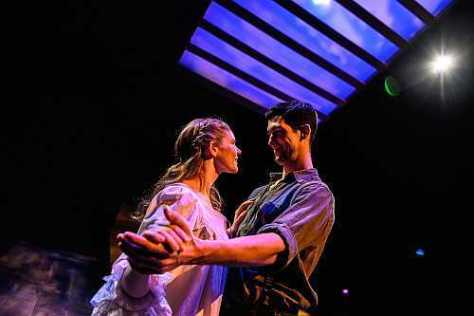 Mary’s Wedding by Stephen Massicotte is talked about as a staple of Canadian theatre. It’s been produced all over the country in near constant rotation and takes place during the most popular time period for classic Canadiana- the first world war. Despite its popularity, the two-handed one-act has never been produced professionally in Toronto (though there was a Fringe production back in 2011), a fact that makes Solo Productions’ relatively high budget affair in the large Streetcar Crowsnest mainspace something of an event.

I’ve never been a huge fan of Massicotte’s dreamy, non-linear script. I find its structure confusing, its characters broad, and its emotions heavy-handed. But it’s easy to see how it became a go-to piece for regional theatres with few technical demands and two meaty roles for young actors. The female role is by far the more interesting as Mary gets to double as her love interest’s commanding officer in flashforwards to the war. Kate Ross is excellent once you get used to her stiff RP accent. She transitions beautifully between her two roles, elevating Mary’s simplistic love story and grounding Sergeant Flowers in careful but not forced physicality without ever tipping into caricature despite the role being written right on the edge of goofy impression territory. Fraser Elsdon is significantly less grounded as Charlie, the farmboy at the centre of the story, never seeming to really sink into the material and say the words as if they weren’t memorized from a script.

Director Kent Staines does a good job emphasizing the humour in Massicotte’s script, which helps the audience invest in both the central romance and the friendship between Charlie and Flowers that is sneakily the most interesting dynamic in the play, and David Boechler’s simple but effective set facilitates movement and levels to add key visual interest. Jason Hand’s lighting design is pretty but heavy-headed and that tone of “just a bit too much” permeates the whole production, including sound designer/composer Creighton Doane’s work. His music is really lovely but it’s over-produced then piped through the theatre’s sound system when all I wanted was silence and his beautiful melodies on, say, a solo live violin.

This is a fine production, highlighted by Ross’ performance, of a firmly medium play. For an intimate contemporary one-act making its professional Toronto debut, Mary’s Wedding fares fairly well. Presented as “one of the most succesful plays in Canadian theatre history” (as the program notes proclaim), it leaves something to be desired.