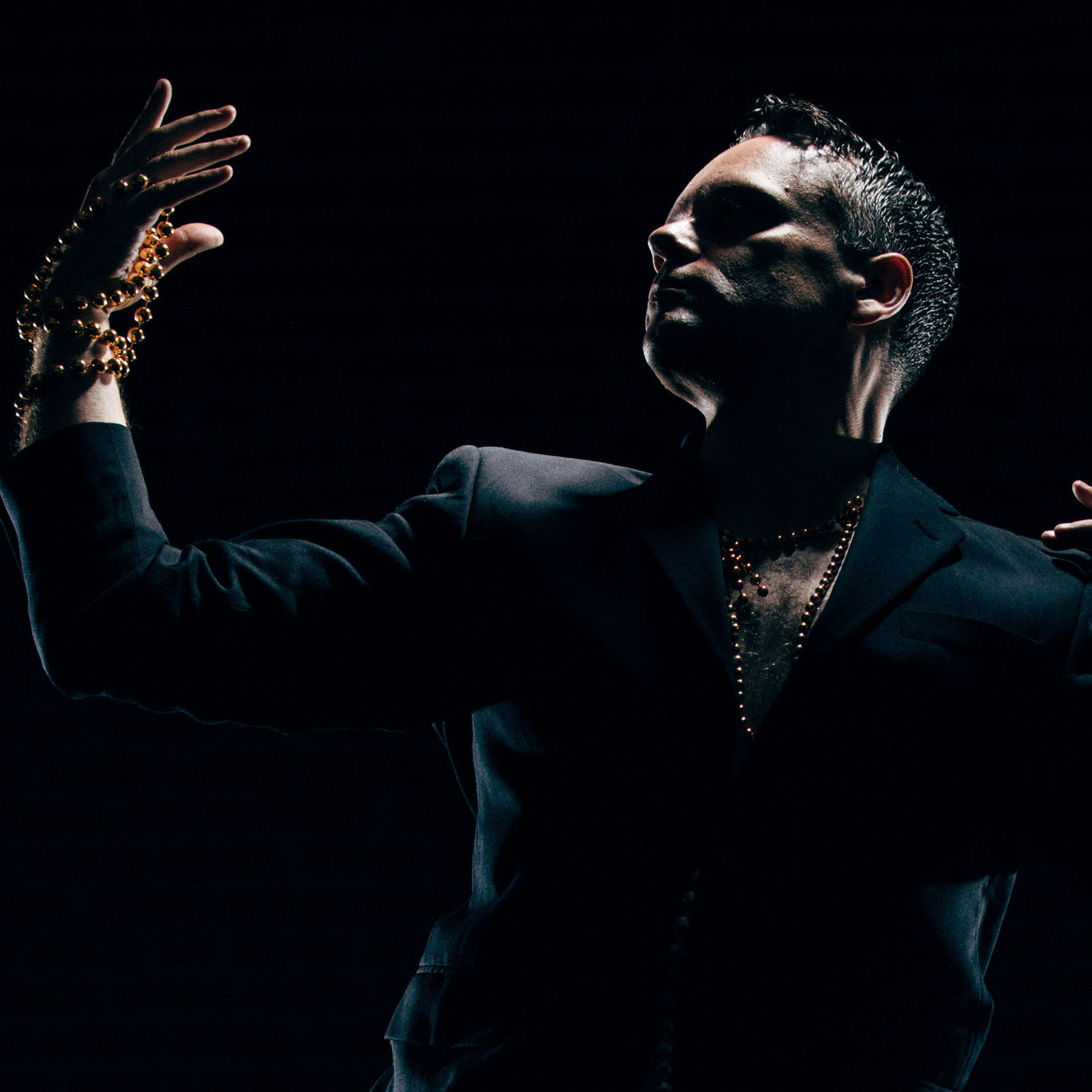 The Art of Degeneration is an explosion of dancing, acting, singing and social commentary on an assortment of issues. The production is nominated for Outstanding Dance Performance because of its desire to rise above dance, at least in its current form, and its risky nature. Louis Laberge-Côté takes fragments from his mind and stitches it together on stage for an exquisite, yet unconventional, performance.

Can you remember your first experience with dance?
Yes and no. I grew up in a family of musicians, so I was consistently surrounded by music throughout my childhood. My mom tells me that, as an infant, I used to stand up and bounce vigorously, holding on to the bars of my crib, each time I could recognize a rhythm or a melody. I cannot recall this myself, but I remember the moment when I told my parents that I wanted to take dance lessons. I was about three at the time. My parents did some research and settled on a specific dance school. Unfortunately, this school did not accept anyone under the age of five, so I had to wait for almost two years, which of course felt like an eternity at my age. In the meantime, I spent countless hours in the home basement, dancing to the family’s broad music collection. So, finally, at age five, I began my journey in the vast world of theatrical dance with my first weekly dance class. In some ways, I consider this my first experience with dance, but it appears that my love for movement was an integral part of my life right from the beginning.

When did you know you wanted to be a performer?
I always enjoyed performing. As a kid, I often put together mini-recitals for my family, with costumes, props, make-up, storylines, etc. At fourteen, I joined a local dance troupe with whom I performed in more than a hundred shows over a period of three years. While I thoroughly enjoyed these experiences, I never really considered dance as a career option. It was only at seventeen, when I joined another dance troupe, that I discovered modern dance. It was love at first sight. From then on, it became evident that I had to focus my time and energy on studying and embodying this type of movement, and everything unfolded from there!

What’s your favourite piece you’ve ever performed?
That’s a tough question to answer. I can’t think of an obvious favourite piece. Over the years, I was fortunate enough to collaborate with a wide range of choreographers working in contrasting styles, aesthetics, techniques, and forms. I have felt challenged, inspired, terrified, and excited by the works I have performed, and I have loved and appreciated each of them differently, and for various reasons.

What provoked the creation of The Art of Degeneration?
During the summer of 2012, my knees began to swell profusely, which of course negatively impacted my ability to move with power, speed and freedom. Since I have always been a fast healer, I naively thought that these injuries would resolve themselves if I rested for a few days, but I was wrong. By December, my knees were so bad that I could barely walk. I obviously had to reconsider many things about my career and my relationship to dance. I applied for a research grant, explaining that I was injured and creatively blocked, and hoping to use this opportunity for reflection and analysis. I was sure that my application wouldn’t be successful, but it was! I took this as a sign that my relationship to dance wasn’t over yet, so in 2013, I had a four-week long residency in Quyon (Quebec) with choreographic mentor Tedd Robinson. During the residency, I took care of my knees, developed a more sustainable way of moving, and considered new methods of creation. The seed of The Art of Degeneration emerged from this original research process.

What was the creative process to create this show?
At the end of the residency, it was evident that I was embarking on a choreographic solo venture and that this new piece had to be centred around the concepts of decay, performance, excess, and degeneracy. Between 2013 and 2018, I worked with various collaborators including Margie Gillis (who acted as a second choreographic mentor), Fides Krucker (who at first was my vocal coach, but eventually became my dramaturg and rehearsal director), Michèle Smith (who worked with me as an acting coach), Dan Wild and Michael Caldwell (who both worked with me as outside eyes and artistic advisors). The process involved a tremendous amount of improvisation, movement investigations, script writing, and vocal training. Leading to performance week, my team (which also included costume designer Cheryl Lalonde, video projection designer Jeremy Mimnagh, lighting designer Simon Rossiter, and composer Phil Strong) had a two-week technical residency in the theatre. Having this much time in the performance space allowed us to collaboratively explore, test, and develop several scenic ideas together. Even though the process spanned over a period of almost five years (on a sporadic basis), I was still shocked by how quickly opening night came upon us. However, it was time for us to share the work with an audience. I felt ready… yet, still terrified.

As this is a mixed medium show, how do you feel your experience as a dancer prepared you for creating outside of your form?
The Art of Degeneration is unquestionably the most multidisciplinary work I have ever created. However, while this combination of forms represented a significant artistic risk, none of these elements was entirely unknown to me. Throughout my career as a dancer and choreographer, I have recited texts on stage, written scripts, sung, shared autobiographical stories, embodied excessive characters, addressed the audience directly, worn extravagant costumes, worked with video projections, as well as manipulated my breath, voice, and facial muscles in extreme ways. I have always approached these elements from the perspective of a dance artist. While I can see how one could believe that I am just as much of an actor or singer by seeing The Art of Degeneration, I still think of myself as a dancer who uses his knowledge of the body, movement, performance and choreographic structure to approach other forms. I genuinely believe that a dance background is a beautiful foundation to build from when approaching other performing arts.

What was the biggest challenge to create this work?
As the piece developed, numerous ideas and concepts emerged. I quickly became overwhelmed by the amount of information, and often felt confused as to how to organize it all in a way that made sense. I had to manage stress and exhaustion through most of the process while also dealing with insecurities as I was venturing into new choreographic and performance territories. I almost gave up many times over the years. I am incredibly grateful for my collaborators who encouraged me and pushed me forward each time I doubted myself.

What are your future plans for The Art of Degeneration?
Symbolically, this piece is a bit of my “swan song” — my farewell to the stage. While I considered the possibility of touring during the earlier stages of the process, as we got closer to opening night I became at peace with the idea that the work would only get four Toronto performances. However, considering how much I enjoyed the performances, and how positively the audience responded, I currently think that I may remount the work in about 2-3 years. So really, I have no set plans at this point. I know I want to take a break from it, but also know that I want to revisit it eventually. I am open to seeing where it goes from there!

Are you working on any other projects that have been influenced by The Art of Degeneration?
I have just been appointed to a full-time teaching position at Ryerson University this past July, so I am currently focused on my pedagogical practice. I haven’t created anything else since The Art of Degeneration, and I can’t tell yet if my future choreographic works will be noticeably different. However, I can see how the process of creating and performing the piece has transformed me. I will be dancing for Shannon Litzenberger in World After Dark (March 6-9 at the Harbourfront Centre Theatre). It is subtle, but I sense that my relationship to the stage has changed. I feel more mature and secure. I can also notice a bit of a difference in how I provide feedback on my students’ choreographic works. It is hard to verbally express what this change is, but I can feel that something has shifted in me. I like it!