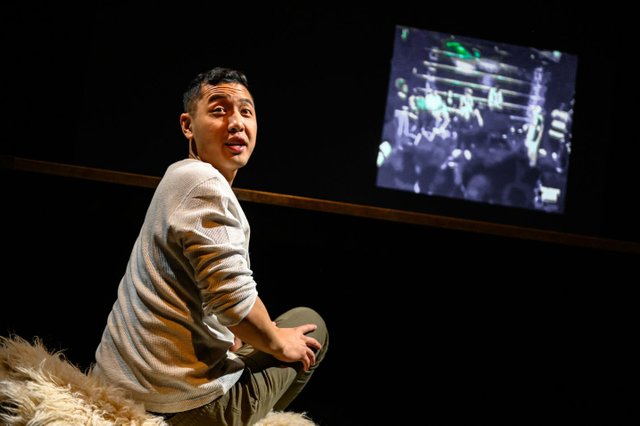 Good Morning, Viet Mom is a wonderfully funny and touching play that has been created and curated so thoughtfully. Journeying from the Fringe Festival to the Next Stage Festival, Good Morning, Viet Mom is now at the Aki Theatre, and will shortly be departing for a Canadian tour. It’s so invigorating to see a play that is both so personal and so universal draw in audience after audience. In Canada, a nation full of settlers and immigrants, there are few among us who cannot relate to the struggles of a family being torn apart as some members travel away, looking for new hope. Franco Nguyen, writer and performer, lays bare his soul and manages to elicit both gut-laughter and tears in his performance.

One of the main questions that this show focuses on, is about family identity, and specifically our mothers, asking “who was she before she was ‘mom‘?”. This is a question I’ve been interested in recently, but remember being shocked by growing up. It was always a strange sensation, mysterious and exciting, to look at pictures of my mother or grandmother as young women, often bikini-clad on beaches, and wonder what they were like. Good Morning, Viet Mom delves right in to this sentiment, as the play came out of a film project to document his family’s history, in Canada and in Vietnam. The show’s tech blends well, incorporating some video and audio clips of Nguyen’s family, as well as using a hilarious background soundtrack. The production and lighting of the show was simple and effective, helping the emotional and tonal changes run smoothly into each other.

The shining star, of course, is Nguyen himself. With a background in comedy, he has the audience laughing out loud right from the beginning. Telling us his story, he navigates easily through the tricky issue of a one-man-show, breaking that fourth wall down and keeping it in rubble at his feet. Although some of the delivery needs a bit of smoothing over, he keeps his grace and commitment to his passion throughout. Nguyen attacks some interesting and difficult themes, including spousal abuse, cultural and lingual racism, and the undying strength of familial love. This performance is definitely worth seeing before it takes off around the country. Welcoming the audience with open arms, we can do the same for Good Morning, Viet Mom.