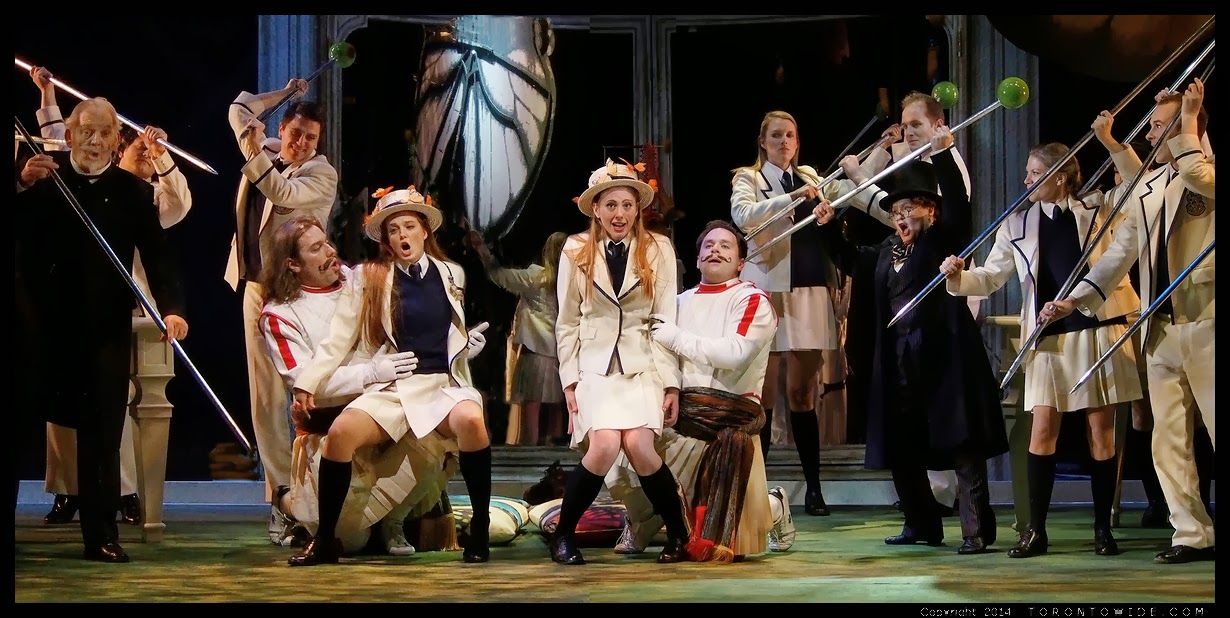 Opera is sustainable when you can enjoy it without fully understanding it or taking it seriously. Few works rely on this more than Così fan tutte, which continues to entertain really-rather-refined audiences who would blanch at its antediluvian gender politics in a modern work. The official title translates as “all [women] do it”, and it’s not hard to guess what ‘it’ is; much of Cosi sounds like a precursor to “chaos is feminine”, if Kermit had a wider tessitura.

Some directors refuse to engage with this issue – audiences either know what they signed up for or can embrace the fun of the farce and enjoy Mozart’s scoring at its best without engaging with its message – while others introduce various twists to make the work more presentable. In the Canadian Opera Company’s remount of their 2014 production at the Four Seasons Centre, Atom Egoyan charts his own course. Ferrando and Guglielmo still bet Don Alfonso that their lovers, Dorabella and Fiordiligi, will stay faithful to them but here the women are in on the joke and delight in steering the scheme themselves to maximize the men’s confusion. Emily D’Angelo and Kirsten MacKinnon’s embodiment of the lovestruck sisters looks very different with this in mind – every exaggerated display of fidelity becomes more hilarious than sad – but not so much so that the show is unrecognizable as Così fan tutte. This forces a curious gestalt shift for patrons who become aware of this show-within-a-show after glancing at their playbill – or reading a review.

If he takes the work seriously, Egoyan also takes it literally: the contrivances of the plot unfold at the “school for lovers” of the work’s secondary title (La scuola degli amanti). Don Alfonso assumes the role of teacher, using the events he set in motion as lessons in love for his impressionable students. This is a fun idea that goes largely unexplored as we rarely could or do hear from Alfonso there or from the students outside of a token role as chorus members. Its main effect is to place awkward constraints on the set design, already muddled by Frida Kahlo paintings and giant butterflies that are more H.G. Wells than Mozart. In his director’s note, Egoyan unboxes the not-so-subtle symbolism of his staging choices and ties it to the work’s larger meaning in the context of Enlightenment thought. This reads as taking the work and himself a little too seriously, ignoring the whimsy that makes Così tick.

The cast members rise to the work’s difficult dramatic and musical challenges. Each sister must portray their rapidly evolving relationship with their new suitor while paying attention to their dynamic with each other and their part in the farce – complicated by the agency they acquire in Egoyan’s rendition. D’Angelo and MacKinnon brim with the charm and energy their roles require, and MacKinnon delivers Fiordiligi’s famously demanding arias with a graceful ease. The men are delightful as the handsome yet hapless “Albanians”, with Johannes Kammler making an impressive COC mainstage debut as Guglielmo. The only holdover from the 2014 production is Tracy Dahl. who returns to steal the show (again, presumably) as a brilliantly funny Despina tying the whole work together.

Don Alfonso’s students may not learn how to love, and da Ponte’s text certainly won’t teach you. Still, even if it’s your first flirtation with the opera, Così fan tutte promises a fun evening – whether or not you have a Valentine’s date in tow.