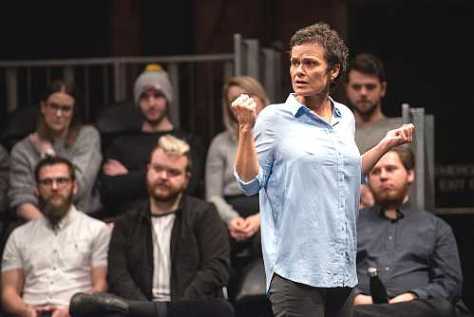 Every Brilliant Thing at Canadian Stage

This can be a difficult time of year for people. The pressures of holiday shopping, the long days without much sunlight, work and family obligations, all conspire to ratchet up the pressure, especially for those who suffer from anxiety and depression.

So it’s heartening to see Canadian Stage programming a show about depression that’s ultimately life-affirming; one that brings the audience and performer together communally, by dispensing with the fourth wall.

There’s just one credited performer on stage (the brilliant-in-her-own-right Kristen Thomson, who we’ll speak more on later), but it’s by no means a solo show. In building the world of the unnamed protagonist—their childhood teacher, their father, their first romantic interest, and more—Thomson will select members of the audience to help her recreate pivotal moments of their life. While the show is, save for a few impromptu ad libs by game audience members, fully scripted, it’s more akin to Rebecca Northan’s Blind Date than any other non improv show I’ve seen; it relies on volunteerism, and the performer’s ability to put those non-performers at ease, to bring the audience together and get everyone invested in the story.

The least challenging roles for audience members, dozens of them, is reading out items from The List. The List, the narrator explains, began when they were nine, after their mother’s first suicide attempt. It’s an ever growing litany of the best and most pure things worth living for; ice cream kicks off at #1, but as it grows into the hundreds, thousands, and tens of thousands as the narrator reaches adulthood, they become more abstract. “Reading something articulating exactly how you feel but lacked the words to express yourself” for example.

Interspersed between list items and the narrator’s story of how the list comes to permeate their life are facts about suicide and depression– subject the narrator becomes an expert on, as they try to grasp how best to cope with their parent’s attempt, and fend it off themselves. It’s common for children of suicidal people to blame themselves,” Thomson states at one point; at another, she describes the concept of social contagion, wherein people suffering from depression are affected by high profile suicides such as Anthony Bourdain and Kate Spade.

The narrator has a succinct answer for those considering suicide: “Don’t do it.” But it’s the play itself that contains playwright Duncan MacMillan’s (with Johnny Donahoe, who originated the role) best advice to cope with depression: don’t do it alone. And Thomson’s empathy and contagious enthusiasm for the experiment of creating this show with a first bemused, then enchanted audience, is terrific. (She also seemed at the performance we saw to have an uncanny knack at picking out people suited to their tasks, such as picking an actual veterinarian to help her care for her childhood dog, or a retired professor to give a short university lecture.)

By bringing the audience together communally for the short 75 minute run time of the show, Thomson, director Brendan Healy, and the creative team behind Every Brilliant Thing guide us all to the best coping strategy for depression; for all that social situations can increase anxiety, and family elevate our stress levels, it’s “our beholdenness to others” that best wards off spiralling into our darkest thoughts. And doing so with humour (this is a very funny show), good music (Thomson/Macmillan throw out some great song suggestions), and a warm communal endeavour seems as good a way as any.