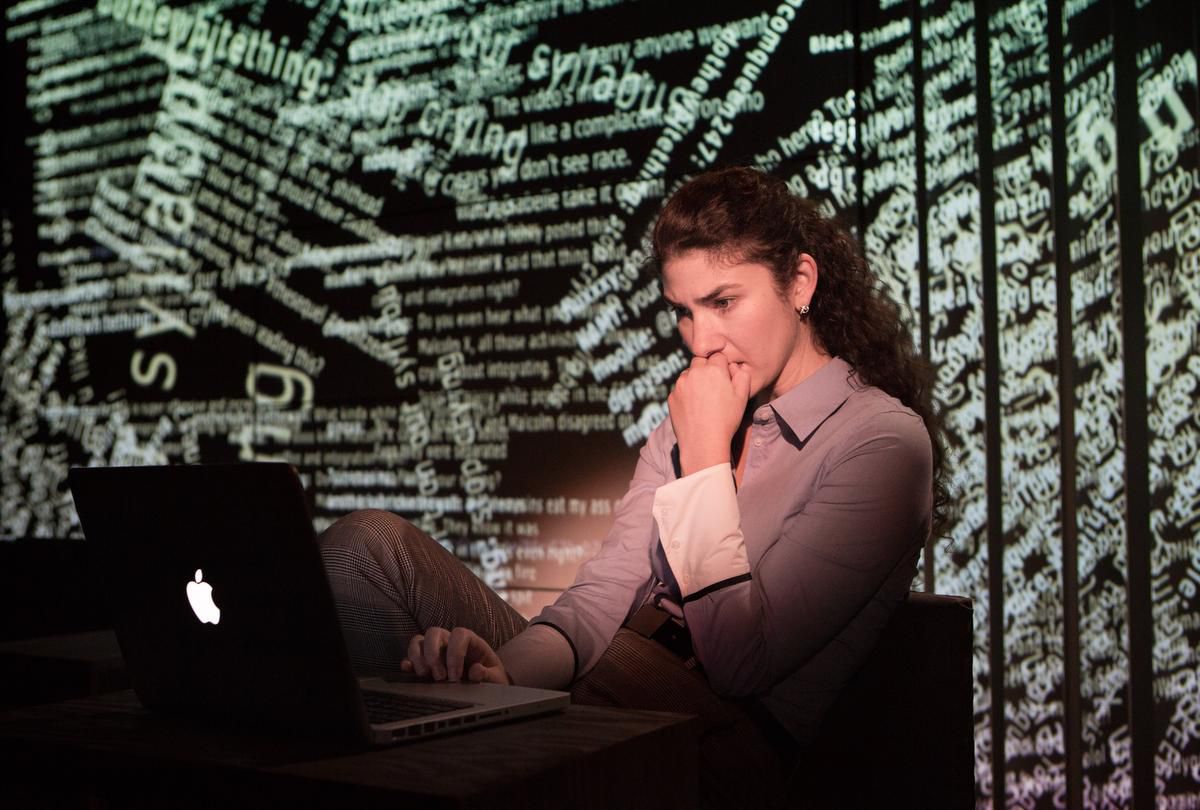 Norman Yeung’s Theory is an ambitious meditation on thorny and topical issues, from free speech in academia and society to race and representation in media. Isabelle, a proudly progressive film professor, sets up an anonymous and self-moderated discussion board for her radical new syllabus. Students flood the forum with vicious comments and a campaign of hate soon targets Isabelle herself. Her desire to unmask her tormentor and continue her social experiment even as it collapses quickly overwhelms her professional and personal life.

One expects these themes to resonate with audiences in Toronto as the city’s self-image as a bastion of tolerance has landed it in the front line of the culture war over inclusivity and political correctness. Both Yeung and director Esther Jun note that they have updated the characters and content to reflect the changing zeitgeist, notably turning Isabelle’s partner Lee into a black woman and centring the plot around this. This gives her troll an obvious route for attacking Lee, escalating the tension between the couple that lies at the heart of the play and making both Isabelle and the audience more directly confront the implications of her project. In a strong cast, Audrey Dwyer’s portrayal of Lee is a highlight as she expresses the show’s moral voice with an emotional register that complements Sascha Cole’s more reserved Isabelle.

Both women are surprised at how quickly the forum sinks into the swamp. The audience has a right to be too. Anyone who spends much time online knows how toxic anonymous comments can be, but Isabelle’s refusal to consider moderation or listen to her spouse and students would be more credible and relatable if the hate escalated over time or there was productive discussion slowly being swallowed up. Instead, she seems like a crazed ideologue from the start and one wonders how someone as socially conscious as Lee was drawn to her at all. Cole’s early performance feeds into this concern but, as the play nears its big reveal, her descent into madness is compelling as viewers begin to share her doubts and set themselves up for the final blindside.

Isabelle’s students serve a mostly instrumental role as vessels for outrage, comic relief, or both, but the young actors all shine on stage. Kyle Orzech in particular handles a demanding role well, displaying the perfect level of earnest eagerness to make the audience drop its guard at just the wrong moment. Fabrizio Filippo has a short but memorable stint as disengaged department head Owen, rounding out the supporting cast.

The play concerns and relies on the use of language in ways that are hard to render vividly on a stage so Cameron Davis’ creative projections do important work here, reflecting the torrent of hate aimed at Isabelle onto the audience. The set design and lighting allow for easy transitions between Isabelle’s work and home lives and bring a sense of intimacy to the Tarragon’s Extraspace theatre, letting the audience feel like part of Isabelle’s sea of faceless students or voyeurs watching a lovers’ spat through the kitchen curtains.

In juggling many related but difficult political topics, Theory‘s treatment of them is inevitably a little shallow. The academic setting grounds the discussion of free speech, without exploring what is unique or salient about that setting. Isabelle’s absolutist take on moderation and disregard for boundaries are easy to lampoon while dodging the question of when students can and should reject more common material. Isabelle – and, by extension, her branch of the academic left – is targeted for forcing her ideas on others, but in Theory this manifests as mandatory exposure to all types of ideas rather than the suppression of politically incorrect material that supposedly drives this backlash in the real world. The play acknowledges that Isabelle’s style of progressive politics is largely performative but not in a way that would blunt those same criticisms when levelled at the play itself. In their notes both Yeung and Jun argue from a clearly and unashamedly liberal perspective while appearing to endorse a type of horseshoe theory, where any ‘extreme’ idea is diagnosed as part of the same pathology, as part of a plea for empathy and civility. Yet two of the main lessons from the play are that tolerance of intolerance won’t be repaid in kind, and that civility can be dangerous if it gives cover to toxic ideas or people. Theory is clearly intended to be thought-provoking, and it is, but it’s unclear what those thoughts are.

Despite that, Yeung’s work is worth a look – and the Herman Voaden Prize committee agrees.
With the help of a promising cast and smart production choices, the play succeeds – if not in theory, at least in practice.