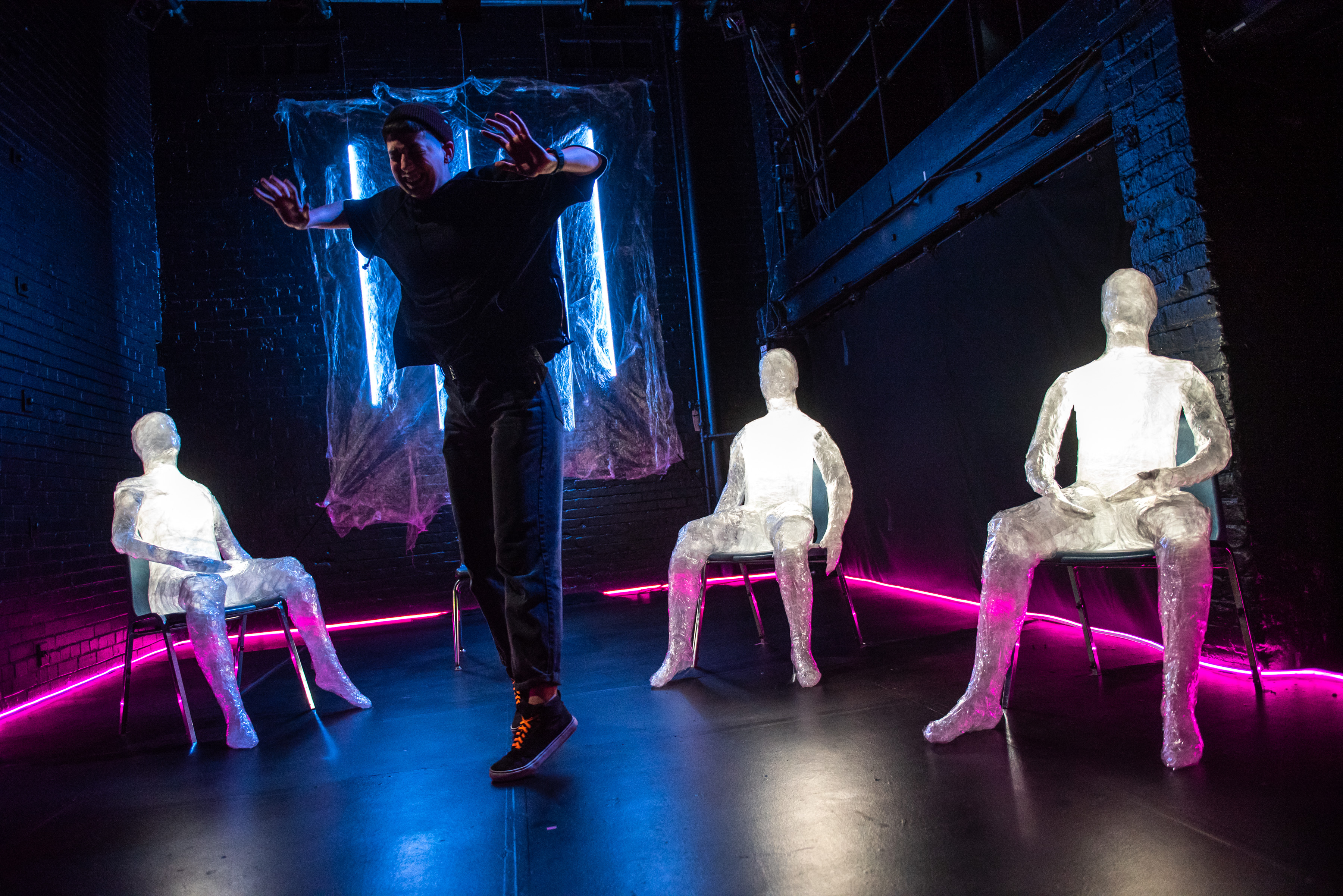 Scorch, Stacey Gregg’s award-winning play about one teen’s struggle with gender identity and the legal system, is ‘based on a true story’. Beneath that lifeless description Scorch’s real power is in telling the true stories of a larger family of people, who find their right to write their own story under attack, without claiming to speak for them. Devoid of context, it would still be a delightful and thoughtful piece; against the backdrop of ongoing events, it’s also an important one.

Kes (played admirably by Julie ‘Niuboi’ Ferguson, reprising the role from Scorch’s run at the Edmonton Fringe) has a complicated coming-of-age story. Many of its themes are familiar to any audience – teenage angst, first love, teenage obsessions, online friendships – but, for Kes, all of this is bound up in figuring out who they are in a world that already made its mind up. Raised and perceived as a girl, Kes finds themself drawn to male interests and narratives while coping with the changes puberty has wrought (compared memorably to aliens bursting out of a human body). They find refuge and their people online, including close friend and then lover Jules. When the pair finally meet, Kes is convinced they are soulmates and that everything finally makes sense – until a court summons appears charging Kes with manipulating and lying to Jules for sex, leaving Kes broken-hearted and facing prison.

The Backspace at Theatre Passe Muraille is the perfect setting for the play. The minimalist set – a silent, dimly lit room with a semi-circle of seats for eerie white avatars – keeps the focus on Ferguson as they make full use of their domain. From the front rows it’s easy to feel like a fly on the wall or participant in Kes’ therapy group, and not just because Ferguson frequently scampers into the audience to address them directly. The content and its delivery are perfectly calibrated to make viewers ponder their own perspectives on these issues.

While the accusation of ‘gender fraud’ dramatically raises the stakes, its full implications are lost in the urgency of the play. The success of Scorch relies on us being interested in the character of Kes for themselves, and the success of any performance relies on the performer achieving that. Ferguson clears that bar right away, and their embodiment of Kes is compelling from the start, but that period of youthful discovery takes time to portray effectively. By the time this twist is dropped, Kes’ entire ordeal – accusation to conviction to redemption – feels rushed. As in the real-life events that inspired the work, the headlines grab the attention while the actual prospect of prison is an afterthought. Jules herself remains abstract and we only hear her side indirectly through Kes; this is necessary for the narrative to work, but it ensures that the play dodges the questions it raises about relationships and consent.

Despite this, Scorch rises to the challenge of tackling a topic as personal as gender while being accessible to a wide audience. A less informed or thoughtful work runs the risk of essentializing parts of those experiences. That danger might seem more acute with playwright Stacey Gregg shaping the character of Kes from a cisgender perspective but, as Gregg notes, the desire to label Scorch as “a trans piece” rather than a broader work about gender and sexuality reflects a tendency to understand the unfamiliar through forcing it into our own categories – in this case, a “medicalised idea of transition”. The audience wants to know and understand – and like – Kes, but this is driven by a curiosity over who or what Kes is that demands a clear and public answer to the wrong question, leaving us “accountable and complicit in the gendering and sexualisation of this person”.

Ferguson is so convincing that it’s hard to imagine anyone else in the role, but the play has received critical acclaim across the world with a variety of performers – each with their own relationship to these issues – giving life to Kes in their own way. Kes’ experience, as relayed to the audience, is not one of all-consuming dysphoria, and their exuberance blunts the fear and confusion that often surrounds questions of identity. They handle an unenviable plight with an attitude we might all envy, but the play is careful not to suggest this is the ‘right’ or only approach or that other experiences are more or less valid for being more or less traumatic in other ways.

There’s a larger question here about what Scorch asks and expects from its audience. We have sympathy for Kes but are we meant to have empathy? Can we? A typical metric for success is making an audience feel invested in something that goes beyond their own boundaries. That’s easy – Ferguson’s Kes can make anything engaging – but are we meant to view Kes’ experiences as categorically different? Kes recalls everyone believing they had a crush on Ryan Gosling when really they just wanted to be Ryan Gosling; certain male theatre reviewers for MyEntertainmentWorld are also rather jealous of Gosling, but we can’t and shouldn’t assume these are the ‘same’ adventure in masculinity. Scorch could take a stand against any need for relatability – art doesn’t have to be ‘for you’ in order to enjoy it or to appreciate its merit (and you don’t need to ‘understand’ someone’s identity, or like them for who they are, for them to deserve rights and basic decency) – but it doesn’t need to. Kes’ charm overwhelms the audience as they deliver insights that seem universal yet strikingly personal. As they remind us in one of the play’s best lines, we all need some place where we can speak in capital letters.