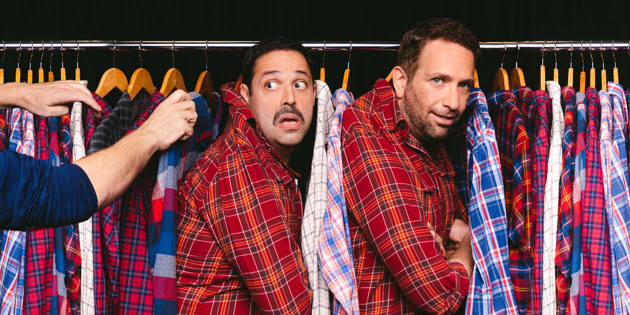 Off-Broadway: The Other John Cohen

Have you ever thought back to some of the most difficult times in your own life, wishing that you could go back in time to reassure yourself that everything would turn out okay, if only we knew what unexpected events would come to reshape our lives? The Other Josh Cohen, running Off-Broadway at the Westside Theatre through February 24th, gives us a chance to watch that hypothetical fantasy play out as future-Josh Cohen visits his past-self one-year prior, at the nadir of his adult life. We meet Josh (played by Steve Rosen) shortly before Valentine’s day; a broke, loveless, socially-isolated, candy-bingeing sad sack whose New York apartment has been robbed of everything he owns save a single Neil Diamond CD, and not even a good one. His thinner, mustache-less, guitar-wielding self in the future (played by David Rossmer) brings us on an intermissionless 90-minute journey of how a single letter changed everything, but not in the ways he expected

There are several implicit wondrous feats at work onstage. Firstly, David Rossmer and Steve Rosen, co-leads of the show both with Broadway pedigrees, are also the writers of the show’s book, lyrics, and music. It’s easy to be too close to one’s own work to perform it, but in this case the duo benefits from the synchronous and the idiosyncratic; their long-standing friendship and creative partnership yields obvious chemistry onstage, but their contrasting personas and comedic styles have the commentary strengths inherent to any great comedic twosome.

The second implicit miracle of the show is the cyclone of the ensemble swirling around the two Joshes. It is perplexing to read ensemble bios in the program and to find not singular character names, but vague approximations such as “A Bunch of People,” “A Lot of People,” or “At Least One Other Person.” As the show unfolds, the reason for such coy ambiguity becomes clear; half of each actor’s bio would otherwise be reserved for the litany of characters played by each member of the ensemble. The ensemble not only serves as an endless revolving door of characters—family, friends, neighbors, ancestors, Neil Diamond, Darth Vader, a pornographic lawyer; you name it—but also as the shows’ on-stage band. Similarly, the program might be twice as thick were each instrument played by the cast members listed in the program. The show seems to be orchestrated in a way that makes space in its score for just about every instrument known to man. For an ensemble of only 5 to play easily upwards of 20 characters and 20 instruments a piece feels like an ongoing magic trick that becomes only more astonishing with every glance across the stage to find an actor who was only seconds ago playing a clarinet, suddenly in a new costume rocking out on a keytar. It’s an ongoing gag of increasing hyperbole, and a concentration of talent that boggles the mind. It would be worth coming back and viewing the show again simply to marvel at the breakneck carousel of the ensemble.

The show on the whole is quirkily original, clever, heartfelt, and consistently funny. If Neil Diamond teamed up with a pair of sketch-comedians to turn the biblical story of Job into a Seinfeldesque musical comedy, The Other Josh Cohen is a good approximation of what you’d get. Come for the laughs, stay for the idiosyncratic story, and leave with a message that will have you walking out of the theater with a little more hope and warmth in your heart.