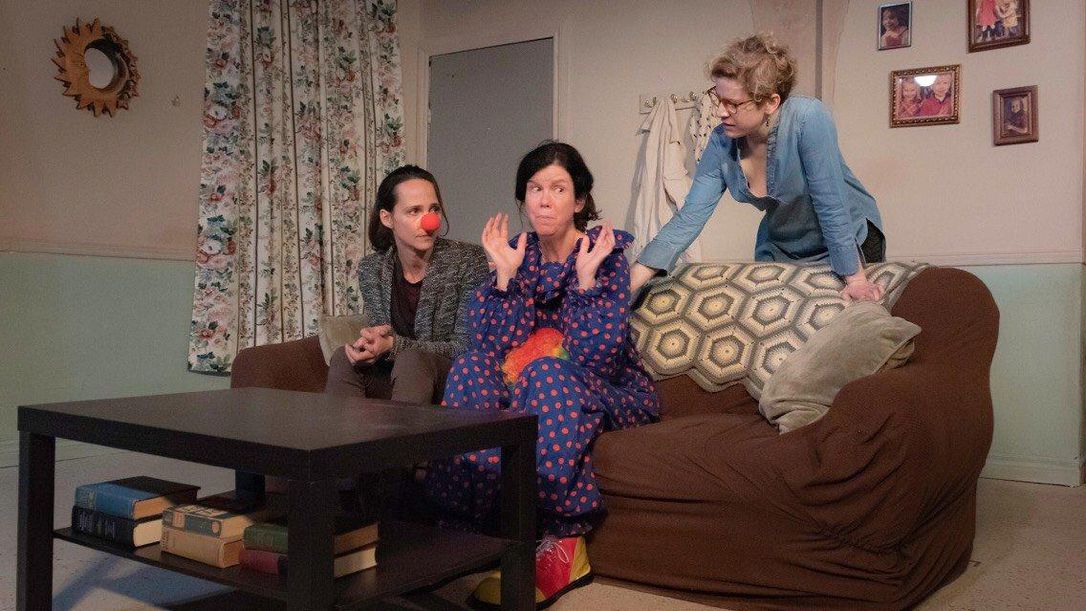 A George F Walker Double Bill at The Assembly

Two small, run-down apartments are the settings for two new George F. Walker plays, which taken together complete his Parkdale Palace Trilogy (begun with last year’s The Chance, which I must confess to not having seen), which are being staged at the Assembly Theatre in a double bill. Put on by Low Rise Productions and Leroy Street Theatre and supported by The Storefront Theatre, each play has a different director and cast, but (with a few changes in furnishing aside), the set remains mostly the same in each, with Walker using both works to pit lower and lower-middle class characters against the spectre of both institutional oppression and their own particular foibles.

Violet (Catherine Fitch) lives alone in a Parkdale apartment, receiving regular visits only from her grown-up daughter Maddy (Lesley Robertson) and psychotherapist supervisor Cathy (Sarah Murphy-Dyson). Initially it appears this mandated supervision is a result of a mental illness which requires that Violet be regularly checked in on; she is chatty and eccentrically energetic despite suffering from high anxiety along with a near-intolerance of loud noises and other stressful stimuli. We soon learn however that Violet is living under house arrest for a grizzly crime that puts the question of her stability and ability to comprehend the world around her under the microscope.

Like Violet herself, the tone of Andrea Wasserman’s production is pitched high, a black comedy with a fairly soft edge. Fitch guides the show with her flintily commanding and charming performance, slightly broad like the play itself, but endearing all the same. The show’s best moments however are the ones where both it and the performances are able to take a breather – an exchange between mother and daughter on the couch where they quietly express how much they love each other is beautifully done. Murphy-Dyson and Robertson both do strong work as different facets of Violet’s fragile support system, and a fun Tony Munch as a thought-to-be-dead relative is appropriately boorish and incensed. Wasserman keeps the cast in constant motion within Walker’s relatively short scenes, and while I wish the overall energy (a lot of shouting) could have been allowed a little bit more nuance for the intimate Assembly space, the play’s more farcical tendencies obviously encourage a slightly more frenetic tone.

The play seems to reach a climax about twenty minutes before it ends, but then the final section nicely complicates Violet’s apparent triumph and validation with the day-to-day reality of living with her illness, closing on a straightforward but human note that confirms the intimate bond shared between the three women, with both blood relatives and an outside helper coming together to form a makeshift family. Overall I think the text could be a little more elegant in its structure and examination of the issues it wants to discuss, but Walker’s unapologetic reliance on cliff-hanger scene endings, hyperactive deliveries of exposition and central characters you just have to root for is charming in its own right.

In Kill the Poor, all these motifs come together to make an overall more successful though still slightly sitcom-y piece of social theatre. Chris Bretechner smart stage design removes Violet’s coffee table and books from his earlier set and replaces them with a much less elegant table. A small TV and a Buffy the Vampire Slayer poster have also materialized. It’s a simple but effective way of introducing a new set of characters who live in the same apartment building as Violet, while illustrating their distinct situations.

Lacey (Anne van Leeuwen) has recently been involved in a car crash that has left her arm broken and her brother dead. She appears to be unable to remember exactly whether or not it was she or her brother who was driving, though she feels certain that it was not she who ran a light but the other driver. With the support of her equally unemployed husband Jake (Craig Henderson), she wrangles with the police and threatening mob forces in an attempt to escape being charged with reckless driving, as the spectre of complete poverty (or murder) hangs over the couple.

Anne van Leeuwen gives the best performance of the double-bill as Lacey, spontaneous and reactive to everyone around her, creating a hard-nosed but increasingly and plausibly distressed blue-collar heroine. Henderson is well-matched as Jake, funny and slightly ungainly in a nice counterpoint to Lacey’s determined grounded-ness. Chandra Galasso does strong, sympathetic work as an investigating police officer, and Al Bernstein is cooly menacing as the driver of the other car with ominous connections to the crime world. Ron Lea is also a folksy highlight as the perfect Walker supporting character, a disbarred lawyer-turned-handyman who manages to help resolve both basic household problems and massive legal issues encountered by the couple. The plot, though sometimes a little confusing, is propulsive and entertaining, and given good pacing by director Wes Berger, though some scenes are a little static in their staging.

Taken together, this double-bill offers a fairly unchallenging but sympathetic and humorous glance at the lives of the strangers of our city, and while it is not the most nuanced glance imaginable, it is one of the more charming and endearing.