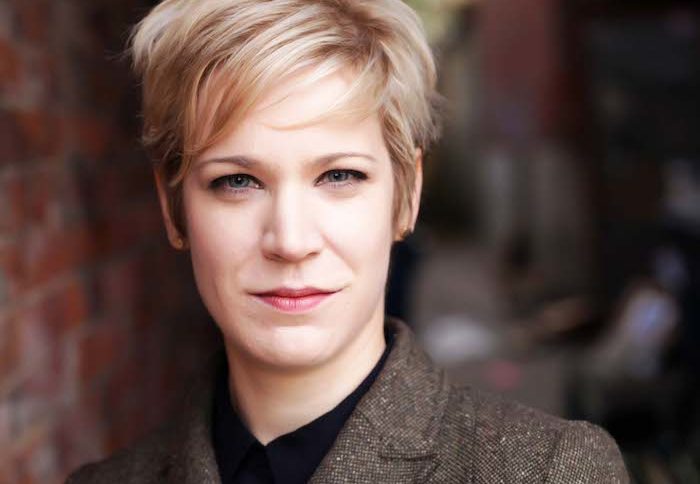 The delightful Lesley Robertson is one half of the beloved musical comedy duo The Diddlin’ Bibbles, and a standout dramatic performer with companies like Hart House and Red One Theatre Collective. In Shakespeare Bash’d’s 2017 production of Twelfth Night at the Monarch Tavern, she brought those two worlds together, earning an Outstanding Supporting Actress nomination and stealing the show as a quick-witted and deep-thinking troubadour version of Feste, one of Shakespeare’s most celebrated wise fools.

Do you remember your first experience with theatre?
In grade three my school put on a Christmas show, and because I was a savvy, strategic little girl I auditioned for “Grandmother” because I knew all the other girls would be auditioning for the ingénue: “Granddaughter”. And I got the role (probably with no competition). A character actor was born!

How did you get involved with Shakespeare BASH’d?
I auditioned for (I think) their first round of General Auditions in 2015. I knew of them but I didn’t know them personally. Their audition notice mentioned that actors could bring a monologue of any age or gender and that really excited me because I had never seen that explicitly stated in a notice before. So I chose a monologue that actually felt like “me”: Launce from The Two Gentlemen of Verona. I had been taught never to bring props to an audition but I definitely brought a stuffed dog and a giant staff because as a clown, I love props. Amazingly, James [Wallis] and Julia [Nish-Lapidus, co-artistic directors] cast me as King John that year from that audition! I was shocked, confused, and very happy.

Feste is a character who can be (and has been) interpreted in so many different ways. Where did you start when developing your interpretation?
With any character I start with the text and am devotedly loyal to it; whatever facts or suggestions given in the text about my character are “the word of God” to me. The next layer of understanding was the world we were creating in the production (the 1920s, the jazz music we were using, etc.) and the cross-gender casting (how does Feste being a woman affect things?).

Tell us about developing the musical elements of the performance.
I don’t normally get cast in musical roles so it was THE MOST FUN to get to work with the musician-composer Franziska Beeler. It was really just Franziska being brilliant and me enjoying the ride of singing her gorgeous melodies! She was very open to adapting her compositions to how the story and scenes were being shaped, my vocal range, etc. I also got to play a little violin which is always a nostalgic joy for me. The music was definitely influenced by what was happening on stage, and what was happening on stage was definitely influenced by the music. I think the cast really enjoyed having the romantic and melancholy melodies pervading and connecting the scenes.

What were some of the most interesting conversations you had with director James Wallis over the course of the rehearsal process?
It’s difficult to remember specific conversations from over a year ago…but I recall us often talking about “the game” of each scene and Feste’s objectives involving “game”. James has such a wealth of knowledge relating to Shakespeare because of his years of reading the plays and criticism, so I learned a lot from him about the role of the Fool in Shakespeare. Just before Feste I had played Dogberry at Hart House and now I’m working on Pompey with Shakespeare BASH’d, so I’m hoping to continue to explore Shakespeare’s fools and clowns.

Jesse Griffiths is also nominated for his role in Twelfth Night. Tell us a little bit about working with him and the rest of the cast.
I adored the cast of Twelfth Night; it was such a contagiously playful group of people. At every rehearsal people were trying new tactics and surprising one another; I don’t know if I’ve ever experienced a livelier rehearsal process. Jesse Griffiths completely surprised me with his comedy chops because I had previously worked with him on Shakespeare in the Ruff’s Two Gents in which he played the sincere lover, Valentine. I hadn’t realized how delightfully silly he was! Shakespeare’s jokes are very old and obscure so it’s a challenge to get audiences to belly-laugh like they would at contemporary brands of humour, but Jesse really emotionally invested in Malvolio and explored him in unexpected, extremely physical ways that hit hard with our audiences. He gave a truly stand-out performance.

What are some of the rewards and challenges of working at the Monarch?
Rewards? Booze. The physical intimacy with the audience. The laid-back and approachable atmosphere to break down people’s inherited notions about what “Shakespeare” is. The challenges? The space is quite limited in size, shape, and you don’t have the same technical capabilities of lights and sound to sculpt the same kind of theatrical magic as a traditional theatre space. I kind of enjoy the indie theatre rigours though, like running out one door of the Monarch, through some falling rain outside to re-enter from a different door – it keeps me humble and alive on stage!

Did you have a favourite moment in the play?
The final moment of the final song in which Feste sings directly to the audience “But that’s all one, our play is done, And we’ll strive to please you every day”. Theatre is all about the connection between the artists and the audience, so for me to get to speak directly to the audience through the especially emotional medium of music was a heart-stirring experience.

What are you up to now/next?
I am currently in rehearsal for another Shakespeare BASH’d production, this time of Measure for Measure (Yay “problem plays”!). It will be at the Junction City Music Hall May 1-6. I am also working on a TV project for my comedy band, The Diddlin’ Bibbles.

Do you have anything you’d like to add?
Thank you for attending our show and promoting indie theatre, and thank you to all other indie theatre supporters and audience members!