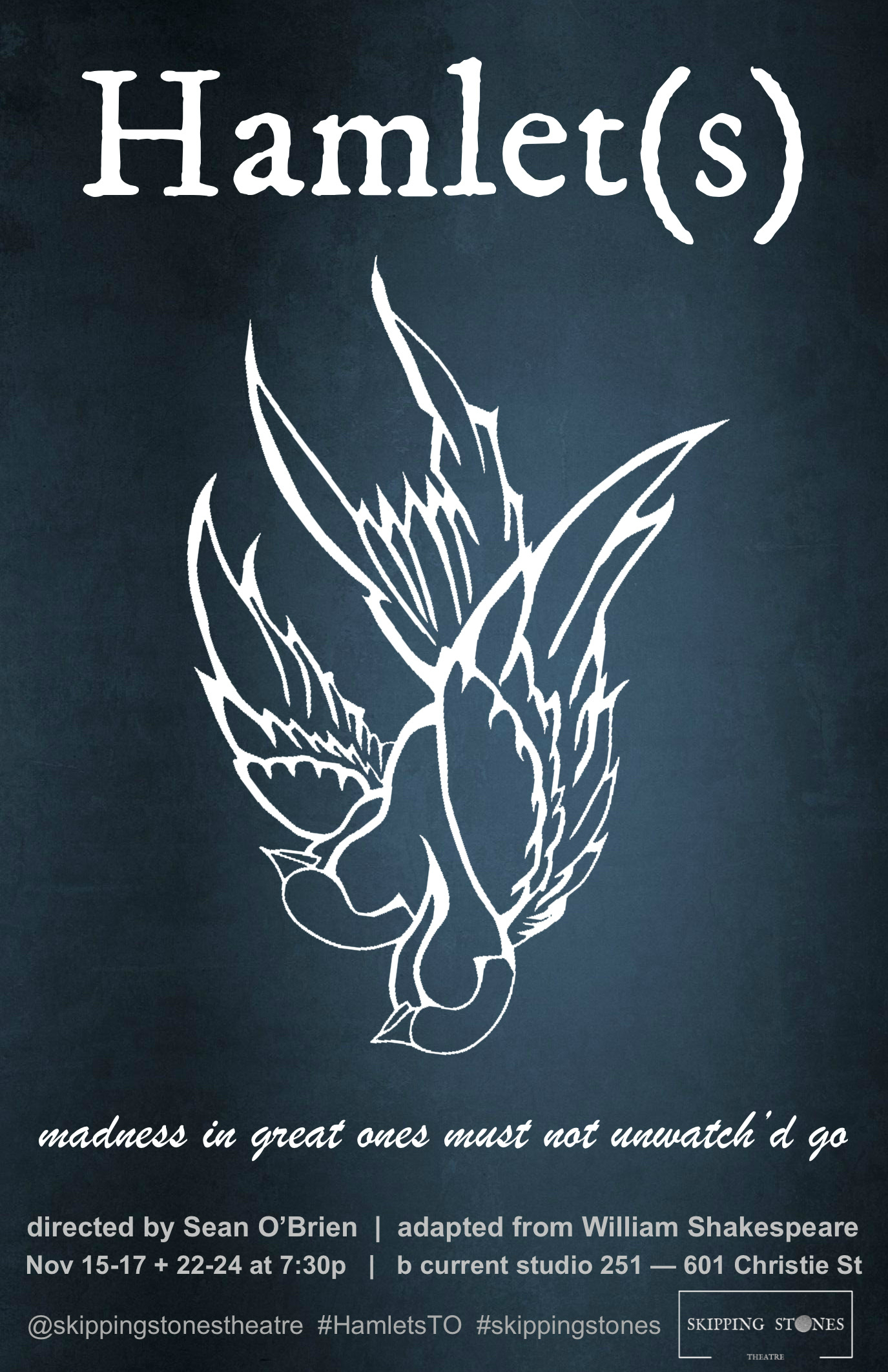 Hamlet(s) ‘must not unwatch’d go’

With a stellar, impassioned cast, Hamlet(s) should not be missed. Only playing until Nov 24th, Shakespeare fans and those of newfound interest in theatre should definitely experience what this small theatre company has to offer — the casting for this production was flawless without exception. Sean O’Brien of Skipping Stones Theatre directs this piece, nestled within Wychwood barn’s b current studio. The tiny stage was concerning at first, but turned out to only enhance the feeling that you were being enveloped in Hamlet’s torture, or wreathed in Ophelia’s sorrow.

In a brilliant interpretation, Hamlet’s lines are split between two different actors in a way that makes his creeping madness palpable, and his snowballing self-destruction chillingly displayed. While his family and friends wring their hands and abjectly attempt to rationalize his sweeping downward spiral, the audience has a chance to see in real time the demons that haunt him and the true crisis that the main protagonist is in throughout. Kate McArthur and Tristan Claxton banter beautifully as two sides of a bipolar coin within Hamlet. Their seamless performances solidify the appearance of Hamlet’s madness ever-hovering at his heels as it taints his happinesses and magnifies his sorrows. Hamlet’s tragedy seems doubled in how he all but eats himself alive on the inside – his illness wickedly smiles over his shoulder, always ready to waylay the feeble attempts of his family and friends to help with an acerbic tongue. The Ghost of Hamlet is in fact his mental illness. Stricken by grief and anger, it is only through this apparition that Hamlet is able to face the maddening truth that his father was murdered — simply coming to terms with it on his own is far too painful and horrifying. The Ghost’s dragging chains spark shades of classic symbolism in this interpretation, the burden of this terrible knowledge and the guilt plaguing Hamlet’s every step.

Skipping Stones Theatre productions are unique in how they work to shed light through the lens of mental health crises in ways that resonate with the audience in sometimes gripping ways. This representation of Hamlet’s character through two different voices fits perfectly — it seems that only very minor changes needed to be made to shift the perspective into an entirely fresh and satisfying experience. Shakespeare’s works have the misfortune of at times being overacted, but thankfully this was not the case for Hamlet(s). Every actor’s lines were delivered with proper measure, which was a very important thing to achieve due to the intimacy of the space. Hamlet(s) holds the prism of mental health awareness to a play that has shined through the ages. It is a piece that brings hope to the idea that the classics can be looked at with fresh eyes, in a way that is respectful to the original while also bringing important and relevant dialogues to the surface. In short, it ‘must not unwatch’d go’.