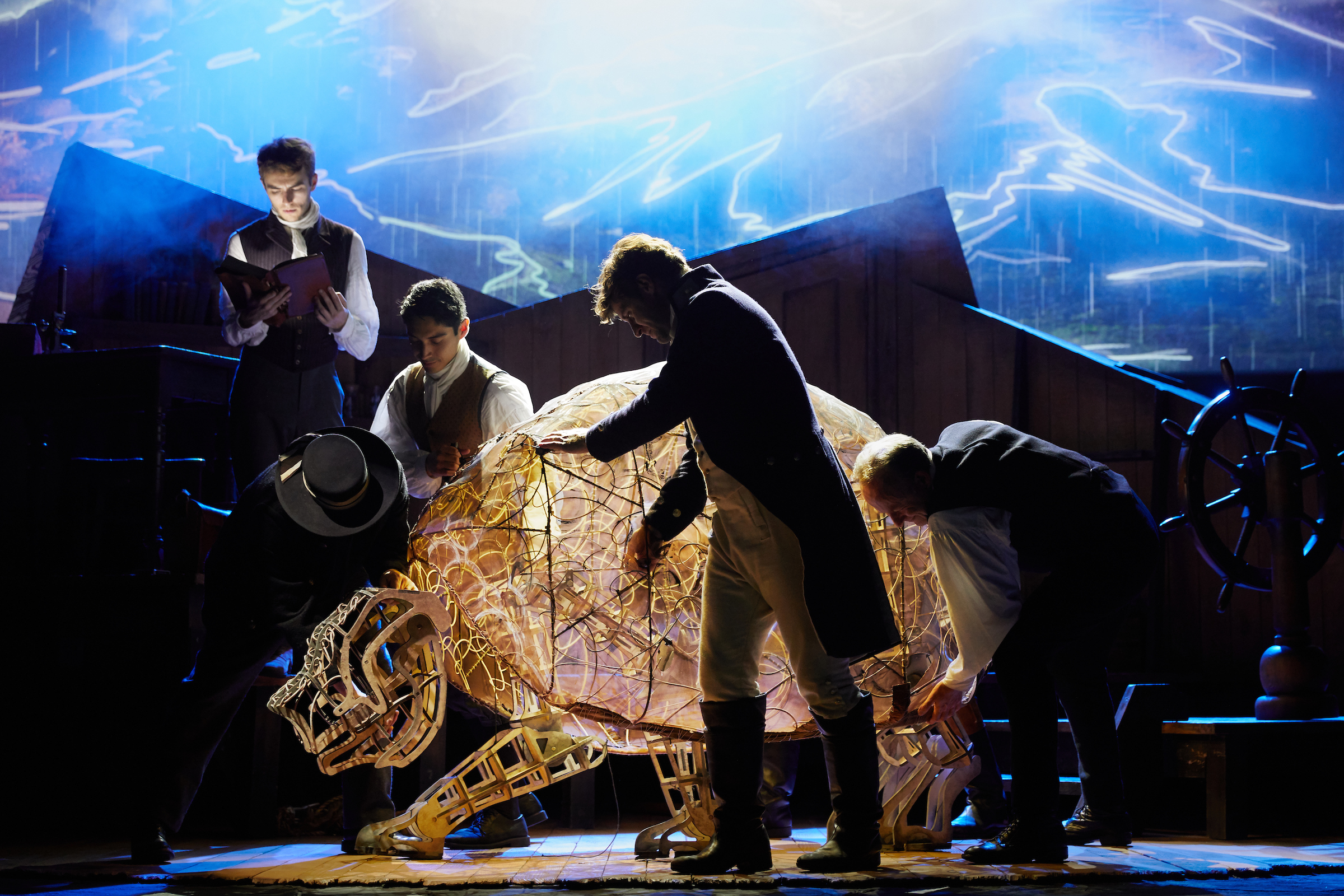 The Wider Earth at The National History Museum

David Morton’s new play The Wider Earth, staged at the Natural History Museum is a confident and educational new piece of work that quite literally spins you through the great adventure of a young Charles Darwin. Fast-paced and fun, this play cleverly lays out the building blocks of Darwin’s theory of evolution, incorporating clever set and staging, magnificent puppetry, yet often managing to detract from the main narrative through overacting and unnecessary side-plots.

The play opens on a young Charles Darwin – played by an enthusiastic Bradley Foster – who, now a Cambridge graduate, is desperate to embark on an oversees adventure and avoid his father’s desire to send him to the clergy. Thanks to his supportive and friendly professor – played by Andrew Bridgmont – Darwin is able to secure a place as a naturalist on-board the HMS Beagle which we see transport him around the world for the next five years.

This epic journey is really where we see the strengths of the set and staging – led by creative producer Nicholas Paine. Set upon a spinning wooden stage, we are quite easily transported from the hull of a ship, to an overgrown rainforest, and even to the top of a mountain. The large digital screen behind, portraying coordinates and beautifully painted location backdrops adds that extra detail and is a lovely touch from production designer Justin Harrison. Similarly, the use of subtle lighting from designers Lee Curran and David Walters is used cleverly to give a sense of the world, taking the audience through howling storms to the calm depths of the ocean, all suitably accompanied by a strong soundtrack from composers Tony Buchen and Lior.

These transitions to and from locations, as well as explorations of foreign lands, is where the animal puppetry really comes into play. Morton, working with the Dead Puppet Society, has obviously put painstaking work into creating realistic puppet creatures that can move and swim in a playful and incredibly life-like manner. From tiny butterflies to mighty giant tortoises, there’s something quite magical in the way these puppets are designed and how they move and interact with the actors. The only thing that could improve the experience was hiring separate actors, glad in all black, to operate the puppets, rather than the main actors who, still in costume, often became quite distracting.

If the set design and visual production are the high points, unfortunately the script and casting issues are the low. In a tale so focused on Darwin’s adventure, his interactions with fantastical creatures, and his dawning realisation of the power of the natural world, it seems odd that such large sections of the play are committed to overdramatic subplots, such as Darwin’s half-hearted romance and his arguments with the ship’s crew. These side-plots appear to be placed in the script purely to add a bit of melodrama, but unfortunately end up detracting from the play’s main narrative. The role of Robert FitzRoy seems particularly miscast, as Jack Parry-Jones struggles portraying an older naval captain who is meant to be troubled over a past guilt and sense of duty. In the scenes where FitzRoy and Darwin clash we see where the script could certainly be tighter, and lines that are over exaggerated often force the actors to overact.

The show is certainly a wonderful visual experience, and for young children one imagines an exciting and educational introduction into the work of Charles Darwin. It also seems perfectly fitting that the show be set in the Jerwood Gallery of the Natural History Museum. Although it lacks the strongest script, this play is certainly worth seeing just for visual staging and the amazing puppetry, that fills the audience with the same awe of the intricacy and beauty of these animals that Darwin must have felt when he first encountered them all those years ago.