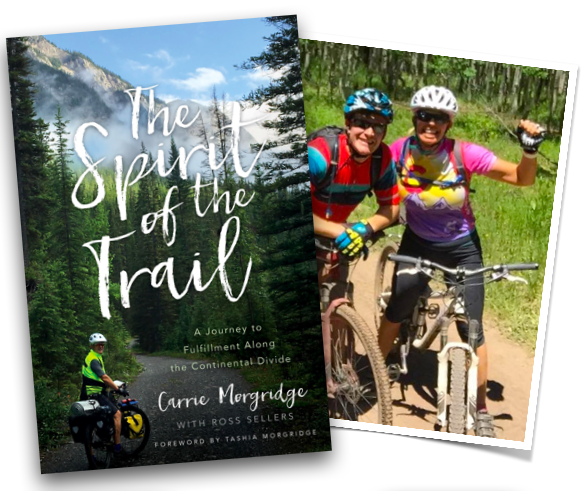 The Spirit of the Trail

The Spirit of the Trail by Carrie Morgridge with Ross Sellers is an account of the 46 day bicycle journey undertaken by Morgridge and her husband John in the summer of 2016. The couple rode their bicycles the length of the Great Divide Mountain Bike Route (GDMBR) from Banff, Alberta to Antelope Wells, New Mexico, a distance of 2,774 miles.

Four years ago, my sister and I walked the 800 km of the Camino de Santiago in northern Spain, so a book about an ambitious trek was of great interest to me. Prior to leaving for Spain, I had read the accounts of many others who had completed the Camino. Like Spirit of the Trail, those books detailed the route and people they met along the way; unlike it, however, the Camino books focused quite a bit on the inner voyage they had undertaken. Ms. Morgridge does speak about gratitude, the essential kindness of people, and, by the end, a desire to re-focus on the importance of “the little things” when they return to their everyday lives. Perhaps this is because the Morgridges started their journey as an adventure and a challenge with no mention of any sort of spiritual or emotional impetus behind their goal. As a result, the book is more about the completion of the incredible and challenging accomplishment and less about the journey to fulfillment suggested by the title. However, as a glimpse into what it is like to bike the Great Divide Mountain Bike Route, it lives up to expectations.

The book takes the form of a daily journal, with comments on the weather, their planned route for the day, notes from John and Carrie’s reflections on the day. Reading it, I had a good sense of the challenges of the route, the joys and difficulties encountered along the way, and the minutiae around where they stayed and what they ate. I could relate to the inclusion of the latter details – on our trek, questions of “Where am I going to sleep?” and “Where can I do some laundry?” were among some of the most pressing. The book gives some information about where the Morgridges found these creature comforts, and in detailing their journey, provides some tips around gear and resources, though it is not a reference or planning manual. I would, however, recommend reading it before contemplating the GDMBR.

One pet peeve – as a Canadian, I take exception to Ms. Morgridge seeming to think of Canada as one amorphous mass. When they were travelling to the start of the journey, they presumably flew into Calgary, though she just says they flew to Canada. She wrote about checking the weather in Canada, rather than that in Banff or even southern Alberta. What a shock the couple would have had if they got their weather reports from Nunavut or Prince Edward Island, very different parts of Canada than Alberta. When in the US, the references are far more local.

Overall, The Spirit of the Trail is an easy read and provides great insight into the challenges of a journey like the Great Divide Mountain Bike Route. Completing it is an impressive feat and the book provides an excellent reminder of what can be accomplished through perseverance and focus on tackling challenges one day at a time.