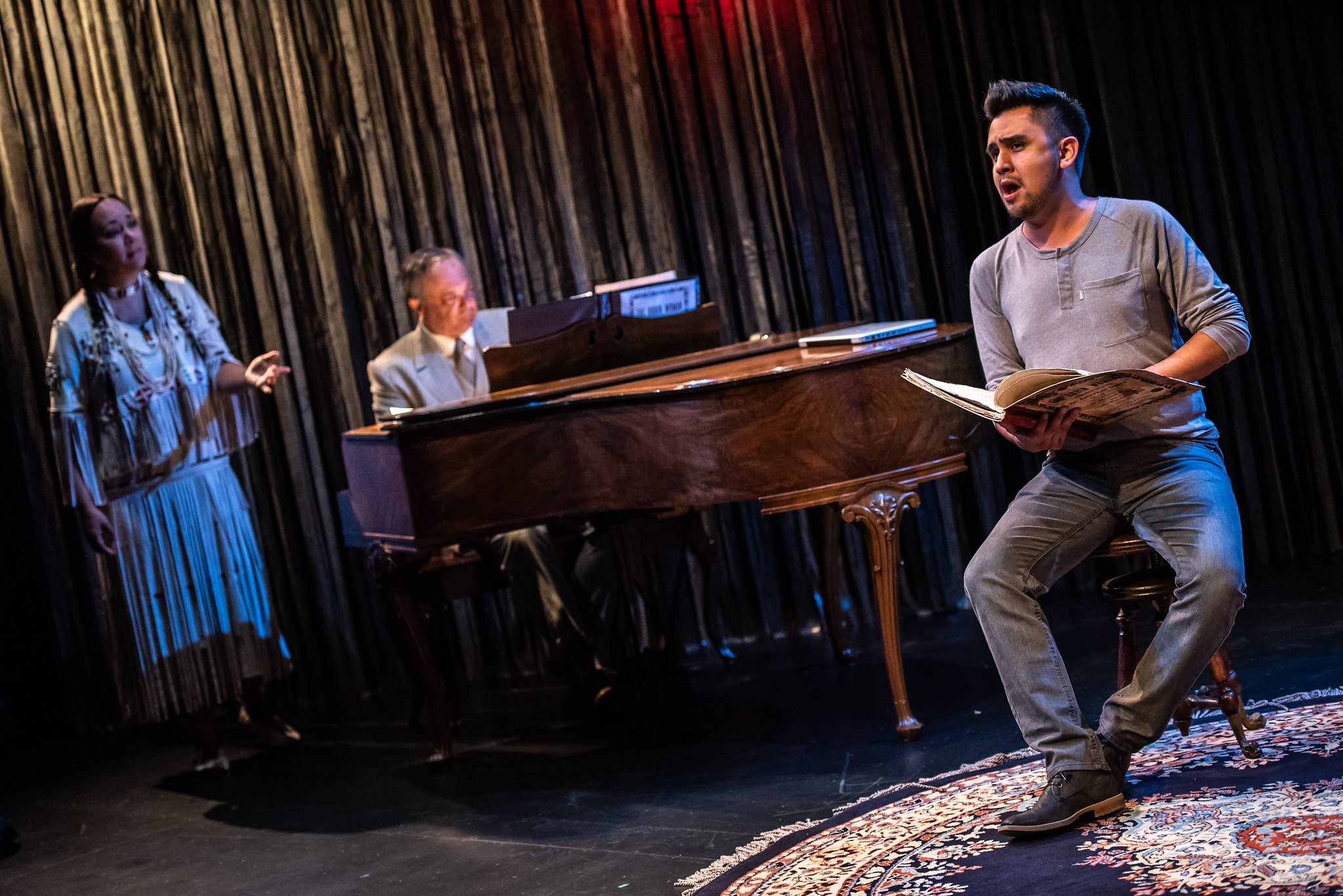 Jani Lauzon’s I Call Myself Princess

A decade of research went into the making of the well crafted I Call Myself Princess, written by Jani Lauzon, and a joint Paper Canoe Projects and Cahoots Theatre Production, in association with Native Earth Performing Arts. I Call Myself Princess weaves two stories together, one of Tsianina Redfeather (Marion Newman), a Creek/Cherokee singer and performer who toured extensively with composer and pianist Charles Wakefield Cadman (Richard Greenblatt) as his librettist during the early 1900’s. Their working relationship, along with librettist Nelle Eberhart (Courtney Ch’ng Lancaster), culminated in the creation of a full length opera of Redfeather’s life which opened at the New York Metropolitan Opera house in 1918, and toured for decades after.

Present day opera tenor William Morin (Aaron Wells) lands in Toronto, from Winnipeg, to undertake a prestigious music scholarship for indigenous musicians. Away from home and the support of his long term boyfriend (Alex Park), William is challenged to centre himself and his art in this new community, a challenge that is compounded when his school decides to stage Cadman’s original work and tasks William with interpreting the historic opera.

As these two stories are intertwined, they play out together simultaneously, and seamlessly, on stage. The earnestness of Cadmen and Eberhart mollifying Redfeather as she faces isolation and racism on the concert circuit live on the stage beside Morin’s sceptical sarcasm as he reacts to the historical writings on Redfeather’s life, his impassioned historiographical research, and his anger at the documented appropriation of indigenous music and culture. Morin, through his frustration and research is on a journey of self-discovery that informs both his identity and his art. While much of this frustration is placed on Redfeather (and others’ like) and her assumed role in the appropriation of Indigenous culture, Lauzon takes great care to respectfully trouble Redfeather’s (and her peers’) motivations and the story is sensitive to historical context and shifting societal norms, such as referencing opera as early 20th century pop culture, while holding the colonial practices of cultural erasure accountable.

I Call Myself Princess is a complex and uncompromising deep dive into cultural erasure and appropriation, individual empowerment, and the lasting legacies of institutional homogeneity. At times brilliantly campy, the performances of all four as actors, vocalists, and pianists (Greenblatt and Wells) is absolutely stunning.