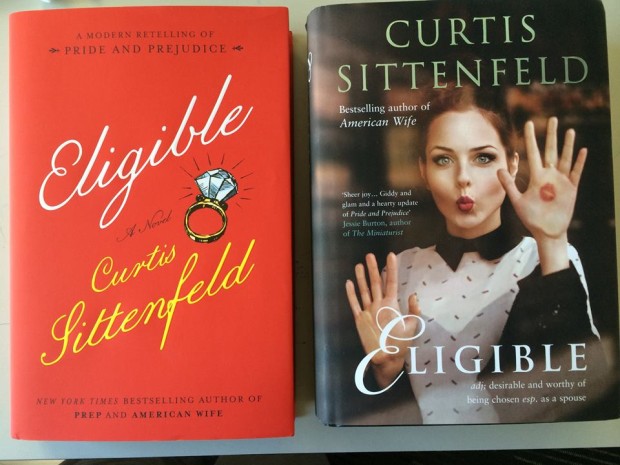 I loved Jane Austen. And I loved this modern retelling of Pride and Prejudice. It perfectly updates the story to capture all of the same themes and it made me squirm, laugh, and seize up in anticipation the same way I did when I first read P&P as a teenager.

In Eligible, Jane is nearly 40 and Liz 38, so the sisters are “mature” in the contemporary sense. Jane is in the middle of IUI treatment when she meets “Chip” Bingley, a former contestant on a Bachelor-type show called “Eligible.” Instead of Chip and Darcy being (solely) the beneficiaries of wealthy fortunes, they are actually doctors—still high-earning professionals with high status in our society. The provincial Hertfordshire is replaced by the provincial Cincinnati, Ohio. Meanwhile, the Bennets are on the cusp of bankruptcy, while none of the sisters except Liz seem to be employed. Lydia and Kitty are obsessed with cross-fit. Wickham is a colleague of Liz’s that leads her on for 14 years.

Sittenfeld, smartly, doesn’t even attempt to replicate the 200-year-old Austen prose that—while it may be beautiful—is not at all how people communicate now. Instead, flowery sentences are replaced by colloquialisms and glib text messages. Every chapter, as in the original, is a concise tableau.

Basically, the adaptation is on point—Sittenfeld remains faithful to the themes of class prejudice, gender inequality, and the confusing torture of dating, but updates them. And the characters remain the same within the adaptation. (Mrs Bennet remains annoying.)

I love this story, so I would probably adore any incarnation of it. But Sittenfeld captures what Austen leaves to the readers to imagine—the yearning, the tension, the self-consciousness, the humiliation of crushing on someone whom you may have mistreated and of whose reciprocation you are unsure.

The result may be somewhat like Chick-lit, due to the topic of modern dating, but I resent this characterization. I resent the genre of “chick-lit” as a way to dismiss stories about women and about finding love. These are valuable stories to read and share with one another. These are stories really about the human condition; they expand our capacity for empathy and provide relief from the loneliness of our society. These stories are just as valuable in the 21st century as they were in the 19th century.