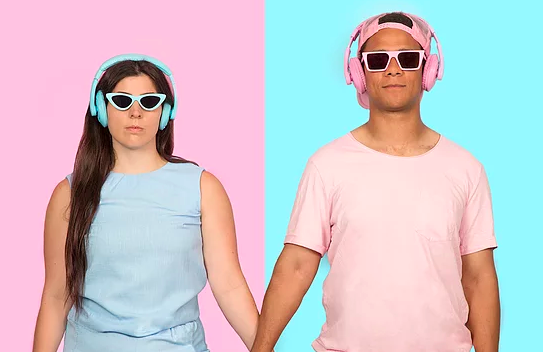 Echo Productions has uncanny timing. Their show Charlie: Son of Man, a narrative about Charlie Manson, debuted weeks after Charlie Manson’s death. And now Echo & Narcissus, a retelling of the ancient myth with a focus on gender, has debuted in the midst of the Doug Ford government pushing sex education into the dark ages.

Because of the inability of men to be peaceful, Hera has taken women away from them and created a utopia of women. Somehow, Narcissus and Echo break the century divide and meet. After Hera discovers this betrayal, she curses Narcissus with the intense love of his reflection and Echo by limiting her speech to only repetition of what she’s heard.

Writer Adrian Yearwood and director Victoria Fuller have taken a tried and true story and brought new life to it through exceptional inventiveness. To bring out the power of Hera, she is played simultaneously by two actors, Courtney Lamanna and Sydney Laforme. Moving as one unit, speaking in unison, melding together to be a creature larger than life, these choices establish Hera as a terrifying and wonderful goddess. Narcissus, played by Yearwood, is also an extraordinary interpretation of the part. Yearwood switches between playing Narcissus and his wizened mentor by looking in a mirror and addressing the audience while in the mentor role. The extreme contrast between the characters, the way Yearwood’s body drastically changes between each line of dialogue, and the witty construction of these specific scenes is enchanting. Additionally, the production uses dance and a rigorous soundtrack that allow Echo to come to life.

The downside of this play is the lack of closure. The story concludes with the two main characters cursed but there is no commentary, no progression in the story, no character development that is based on this life changing moment. At a 45 minute run time, there is room to create a final scene or structure within the story to negate the need for closure. Even with this flaw, the show is still worth seeing.