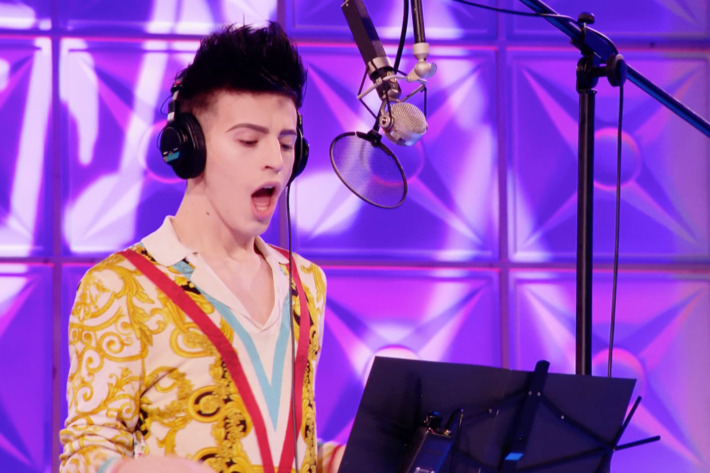 This week on the prequel to Aquaria’s coronation episode of RuPaul’s Drag Race season 10: Singing! Choreography! Making me watch Katya’s verse of All Stars 2’s final four challenge Read U Wrote U for the thousandth time because it is the greatest verse in Drag Race herstory and these challenges always make me think of it!

As the girls reconvene after Cracker’s elimination, I’m left feeling a little empty with how this season is concluding. It feels like we were left with loose ends that never really tied up. Remember when Cracker and Aquaria were rivals that were supposedly too similar, but they were never really in direct competition and the once-major plot point kind of fizzled. Perhaps it’s a credit to the cast and the editing, but I also have trouble seeing what we’re supposed to think of everyone’s stories that are left as we wind down. Kameron is “the quiet one,” though lately she hasn’t been noticeably quieter than anyone else, and even so, that’s not exactly the story of a winner I can feel sold on. Aquaria was the overconfident diva, but Eureka seems to also be that. Asia points out that it’s Eureka, not Aquaria, who is the “I want to win girl.” Of the four, Asia isi the only one who seems to have a complete storyline, one that is marred with errors – being too giving, messing up a runway, blaming others for her failures – but also with triumphs. Asia has overcome extreme grief and loss as she elaborates on the podcast segment of this episode, and she has used that to build community. She never loses her shade, her edge, her wit, but at the same time cares more deeply for the other queens and for the health of the drag community at large than anyone else has demonstrated this season. She has the energy as well as the wisdom and experience, and, whether the show meant to or not, it has posited her as the only truly three dimensional character remaining of the season. Aquaria will get the crown, but it will be earned through a pure competition lens, not because of what she can offer as a superstar, and therefore leader, of the drag community.

The final four calls for some good old fashioned homonationalism, so RuPaul is having this season’s Ru-mix be the title track of of his 2017 album American. As usual, they must each write and record their own verse, plus tackle some unprecedented difficult choreography from Todrick Hall and make the compulsory appearance on Ru and Michelle’s boring podcast, What’s the Tee. Obviously none of this matters because since the season 9 rule change and the lip-sync-off in the finale, we know that no one is getting eliminated at final 4, no matter how small a chance they have at actually winning. This year’s honorary Roxxxy Andrews is Kameron, who will skate by to the finals despite an obvious gap in ability between herself and the other three competitors, and clearly has no shot to win it all. While Todrick short-circuits and can seemingly only offer “singing up one octave” in terms of advice, Eureka pesters Kameron to sing for them in the work room, then has the audacity to say that Asia is making a mountain out of a molehill when she sticks up for Kameron who is clearly uncomfortable and doesn’t want to sing. On stage, Todrick and Aquaria’s flirtmance makes me extremely uncomfortable, but not as uncomfortable as Eureka feels simply by watching Aquaria be way more talented than she will ever be.

Performing for the judges, Aquaria serves a top 3 all-time performance that we’ve ever seen on one of these Ru-mix challenges. Her choreography is indeed way more challenging than we generally get on the show, and she executes like a professional and sells the hell out of her lyrics. We all know that I’m forever #TeamAsia, but here, Aquaria is absolutely undeniable. Asia, despite her reservations due to her lack of singing and dancing experience, is fueled by the unpleasant results of the last singing challenge, and turns it all the way out, disproving anything she told us about not being a dancer. Eureka and Kameron are both also present for this challenge. I have to say, even though I know that Eureka and especially Kameron did a good job here, they’re done a disservice by two things that make it hard to pay attention to them or care about their performance: The first is that we know there won’t be an elimination, so it doesn’t matter what they do here. If there were an elimination, one of these two would go home because Asia and Aquaria were already unclockable in this challenge and have generally slayed the season the most. The knowledge that one of them will get to the finale regardless of their performance is frustrating. The second is that this song is not the bop that something like Read U Wrote U was. I will not be playing this song in my car while I drive with my sunglasses on and the windows down, so I’m not particularly invested in how good the verses are. Make better music, RuPaul! I wish to jam!

Regardless, everyone is objectively good both in the challenge and on the runway, which is more than we could say in All Stars 2 when Roxxxy got through to the end and that season still turned out iconic so there’s hope yet. For the high glamour runway featuring no guest judges, just Todrick, Kameron, Aquaria, and Asia all look breathtakingly stunning, and again, Eureka is also there. Eureka’s cut-away says something about how when Edison discovered the lightbulb he said, “Eureka,” which I googled because it makes no sense. Eureka means “I found it,” and in school I learned it in the context of the discovery of gold in California, which is why the word is on its state seal, but it’s actually first attributed to Archimedes when he stepped into a bathtub and discovered displacement when the water level rose. The Edison thing is a myth that isn’t even that common and yielded few search results. If you thought I wasn’t petty enough to use historical misinformation as a legitimate reason to continue disliking someone then you have not been paying attention. Do your research, Eureka! It’s not hard! It demonstrates a lack of commitment to your drag character and persona that you’re not even bothering to learn what your name means.

Ru is proud and emotional and asks the question that always makes me cry, when she holds up childhood photos of each of the final four and asks what each queen would say to their younger selves. I almost make it through the episode without shedding a tear, until the queens depart and Michelle says to the judges, of Asia, “She is one of those people, that without those people we would crumble as a community… And I think that Asia would be an incredible representative of the community.” Truer words have never been spoken. Will Aquaria deserve the crown based on the competition? Absolutely. Will she be the best representation of, and ambassador to the drag community? Probably not. I’m still not sure what Aquaria is offering that Violet Chachki didn’t, and how either queen is really using their platform for the greater good of the drag world, but I hope that Aquaria can prove me wrong as she gains more clout and life experience.

The episode ends with a lackluster top four lip sync to Call Me Mother, RuPaul’s most infectious tune, marred by the fact that it was clearly plagiarized from Azealia Banks’s The Big Big Beat, but nevertheless, Ru is impressed enough to follow through with his already planned out idea to send the top four through to next week’s finale, where we will hope for the best, prepare for the worst, but know in our hearts that we’re going to end up somewhere in the middle, with a deserving but not exactly groundbreaking. Until then, I still have one more week to be optimistically #TeamAsia.