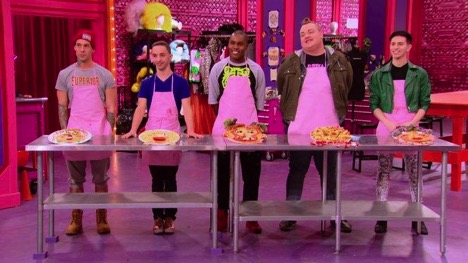 Drag Race S10, Ep11: A Sewing Machine Should Not Have That Much Power

Who needs inner saboteur when Ru is the greatest saboteur of all, and she’s right there? No, I’m not just talking about RudePaul, Ru’s evil twin with a bad attitude and a worse wig, but Ru herself, who continues her trend of making decisions so mystifying I find myself wondering if she’s hoping if she inexplicably lets Kameron coast to the end she can score a date with her at the end of all of this, because no other explanation makes sense.

Let’s start at the beginning, where Asia correctly identifies that Kameron is full of BS, after she goes full Ben Dela Creme with guilt after sending Monet home in the lip sync. They’re all talking about their first time in Drag when Ru introduces the maxi challenge to create two personas, then enters with Cheyenne Jackson who at this point I think is just famous for being gay. For the mini challenge, they’ll have to drag up pancakes in honor of drag brunches, and amid stiff competition this season this may be the mini challenge that has the least to do with actual drag that we’ve ever seen, and I’m here for all of these small absurdities that remind us not to take this show too seriously, especially when Asia’s winning entry is named Panqueesha.

For the mainstage, they must create two looks: One as the best versions of themselves, highlighting their most positive attributes and contributions to drag, and an evil twin, an evil saboteur that points out all of their faults and eats away at their confidence and their careers. This prompts Ru to give some patented generic workroom advice that demonstrates that he’s not really listening to each of the contestants but rather further promoting whatever lifestyle brand he’s currently trying to achieve. No matter what the queens bring up; Asia finding solace and comfort in her own misery, Kameron and her shyness, Cracker and her tendencies to over-explain, all Ru can offer is for them to love themselves, to conquer their insecurities and push aside their egos’ anxieties about what other people think of them. The advice is not unique to each queen, and is not responsive to what they’re actually expressing. It’s particularly striking in Aquaria’s case, when Ru offers that perhaps Aquaria is afraid that Ru will think she doesn’t belong there. Of all of the potential issues that Aquaria could have in this competition, imposter syndrome truly does not seem to be one of them. If anything, her overconfidence, not her insecurity, would be her downfall, but it seems that Ru just sees any queen’s specific problems as an excuse to insert generic fortune cookie messages about self-love and acceptance into the episode.

Aquaria, normally a total failure at being quippy in confessional, gives us the best shade of the episode, saying, “If you don’t have anything nice to say don’t say anything at all… That’s probably why Kameron don’t talk.” Ooh, girl! The most genuinely introspective of the group seems to be Cracker, who identifies her saboteur as a one-time ally, a voice that in a past live pushed her to work harder, to be better, but now won’t leave her alone, pestering her constantly and never allowing her to be at ease. This hits me right in my neurotic, Jewish little heart. Unfortunately, Cracker has reason to be anxious, since her struggles with the sewing machine force her to go in a different direction with her evil twin look. This week’s mirror talk, appropriately, is about confidence, specifically whether their boy-presenting selves’ confidence has suffered as a result of their drag careers. In a moment of honest vulnerability, Aquaria mentions that because she is so confident as Aquaria, her boy self often feels less adequate. Important conversations surrounding drag and identity, people! That’s what this episode is supposed to be about, afterall.

Our guest judges this week are Ashanti, and in one of the biggest WTF decisions in Drag Race guest judging herstory, Lena Dunham, who everyone has to pretend to be excited about. Kameron wears an outfit she could have easily recycled from the Last Ball on Earth’s winter-themed runway, which doesn’t seem to demonstrate anything about her best drag self, nor is it illuminated by the voiceover that points to her muscle-queen status, which is hardly showed off in this outfit. Her dark version looks like the same character but in brown instead of white, and slightly racist faint paint around the eyes. Eureka is giving plaid Clueless realness which is cute, but nothing special. Her voiceover is so ridiculously on the nose that I can’t believe the judges eat it up and don’t roll their eyes at the absolute cornball-i-ness of all of it. Cracker serves Marie Antoinette-meets-Elsa-from-Frozen, and while the judges live for her best self, it’s clear that there was a disconnect with the evil twin, with the outfits having little to do with one another. It’s also telling of Cracker’s fate in this episode that while you hear audible laughs from the panel for Eureka and Kameron’s voiceovers, it’s crickets for Cracker’s objectively funnier writing and delivery. Aquaria’s good self looks absolutely stunningly beautiful, no ifs ands and boobs about it. Her evil twin is all the evil and none of the twin. It’s striking to me how the judges can read Monet for filth last week for not having a family resemblance, then when the challenge is to create an evil twin, and Aquaria pulls out a stunning look that has absolutely nothing to do with her first outfit, the judges suddenly toss out the criteria and hand her the win just for the impressive styling. All I’m saying is the parameters of the challenges seem awfully subject to whoever the judges feel like sending home anyway. Asia looks absolutely stunning, and has a clear connection between the two looks, joined especially effectively by the use of the balloon props. If this girl doesn’t win this season I just don’t know what I’m going to do. The courage, the craftsmanship, the originality, plus all the beauty and personality we expect of our next drag superstar. Tens across the board for Miss Asia O’Hara.

Their evil twins must answer the fateful question of who should go home. Always the coward, Kameron says Aquaria. Cracker and Aquaria say Kameron, Eureka and Asia say Cracker. So it is written, so it shall be, Kameron and Cracker find themselves, justly, in the bottom, but unfortunately the justice ends there. Kameron pulls out the same tired splits and cartwheels for the third week in a row, and call me old fashioned, but I believe that when a queen is in the bottom for the third consecutive week, her track record should catch up with her and if she does not absolutely blow her competitor out of the water (which she did not), she deserves to go home. My frustration stems from Ru’s frustration: She is visibly irritated with Cracker during this challenge because she knows that Cracker is capable of doing better. Because Cracker’s potential is higher, because she is more talented than Kameron, which everyone can see, the expectations are higher and therefore the disappointment is greater when she does not meet them. On the other hand, the bar for Kameron is so low that Ru doesn’t feel disappointed when she doesn’t succeed, because it’s what we’ve come to expect. Therefore, Cracker is being punished for being better than Kameron, simply because Kameron no longer has the ability to disappoint Ru, because her whole stint on the show is a disappointment. She was never going to win the competition, but on principle, particularly in light of past confounding decisions this season, I want #JusticeForCracker. At least she’s certainly on the short list for Miss Congeniality, since we all know that all of the deserving black queens are at a disadvantage, given that in the history of the fan-voted award, Latrice Royale is the only black contestant to ever win. My endorsement, by the way, remains Monique Heart, mostly because I’m certain that Asia will be in the finale, and hopefully get the real crown to call her own.