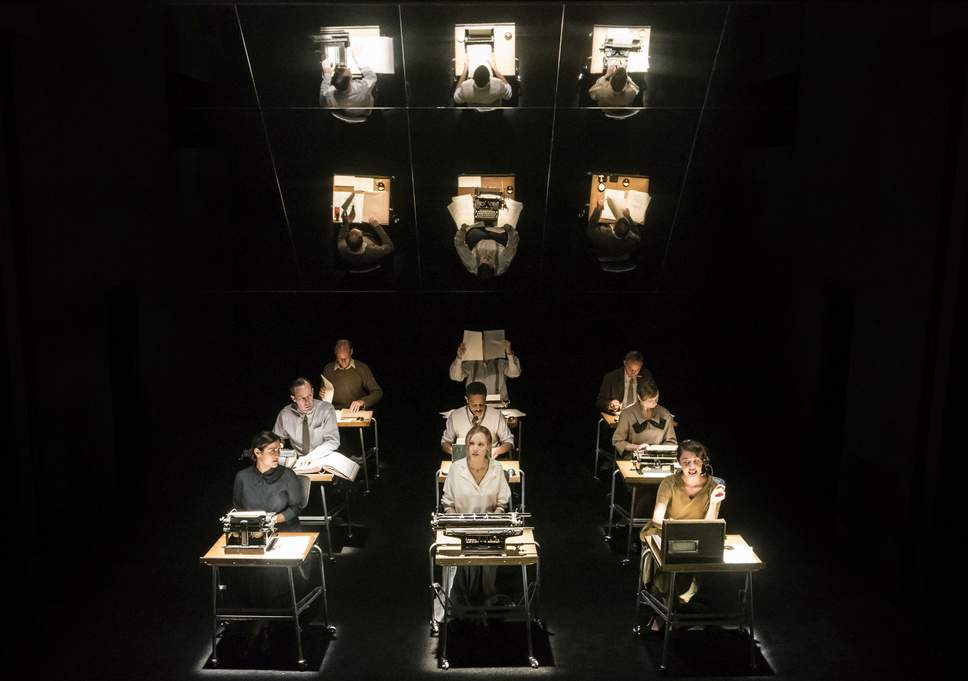 Machinal at the Almeida

It is remarkable that the principal themes of Machinal, an expressionist 1928 play by Sophie Treadwell, should resonate so acutely with the dominant questions of the modern world. Ideas of a woman’s role in an industrial and patriarchal society, whether one can be trapped by society and whether there is any ‘way out’ are in many ways just as relevant in 2018 as they were 90 year ago. This latest iteration from Natalie Abrahami, is an unsettling and enthralling thought-experiment into these wider themes. It assaults the senses both literally and figuratively, presenting a collage of vignettes that thread together a woman’s struggle to adhere to what society demands. Supported by some evocative performances, particularly from Emily Berrington, Machinal is the kind of piece that lingers in the mind long after its conclusion.

Inspired by the real-life case of convicted and executed murderer Ruth Snyder, the narrative follows episodes of the life of a young woman (Emily Berrington). Initially following the rules that society lays down – to get married, have children, provide for her family etc. – she abides, marrying her insufferable boss (Jonathan Livingstone), only to later resent those constraints for the unhappy and inescapable reality in which she finds herself. Dialogue is short, scattered and repetitive, mimicking the feeling of being slowly broken down by the environment and sharing in the Young Woman’s pain.

Miriam Buether’s set adds to the atmosphere, with a large mirror reflecting down from the ceiling onto the stage. This gives the impression of the characters being figures in a top-down game, controlled by some cruel greater being. The lighting from Jack Knowles is also striking, with two bars of bright light interspersing each ‘episode’, providing a dazzling break form the otherwise dark and subdued scenes. It purposefully unsettles the audience, adding to the feeling of an oppressive world and emphasising the Young Woman’s story as a series of episodes that are shared by many others.

In an attempt to further highlight the parallels with today, Natalie Abrahami also presents this story in a somewhat timeless setting. One moment, the Young Woman is working on old fashioned typewriters in a smokey office building. The next, characters are in what seems to be a 1950s jazz bar. In what is possibly the most jarring change, the protagonists find themselves in a modern suburban house, along with a television and games consoles. It is clear what Abrahami is aiming to achieve with this decision, yet it is possibly a step too far and unnecessary, only raising questions about timelines that don’t really lead to any narrative pay-off. The direction of the performances is also sometimes a little one-note. Emily Berrington, for instance, portrays a truly broken individual, with emotion in every line and an air of desperation in all her interactions. However, this constant refusal to ‘submit’ means it is sometimes difficult to enter into her heads-space, leaving some scenes lacking the depth they could otherwise deliver.

Macihinal is certainly an interesting piece with a level of relevance to modernity that one would not immediately expect. Tragic and unsettling, it raises questions that are likely to prompt debate in the theatre lobby and beyond. Buoyed by some strong performances and interesting, if sometimes misguided, production choices, Machinal is a noteworthy take on an old classic, linking it in thought-provoking ways to the big questions of the modern world.