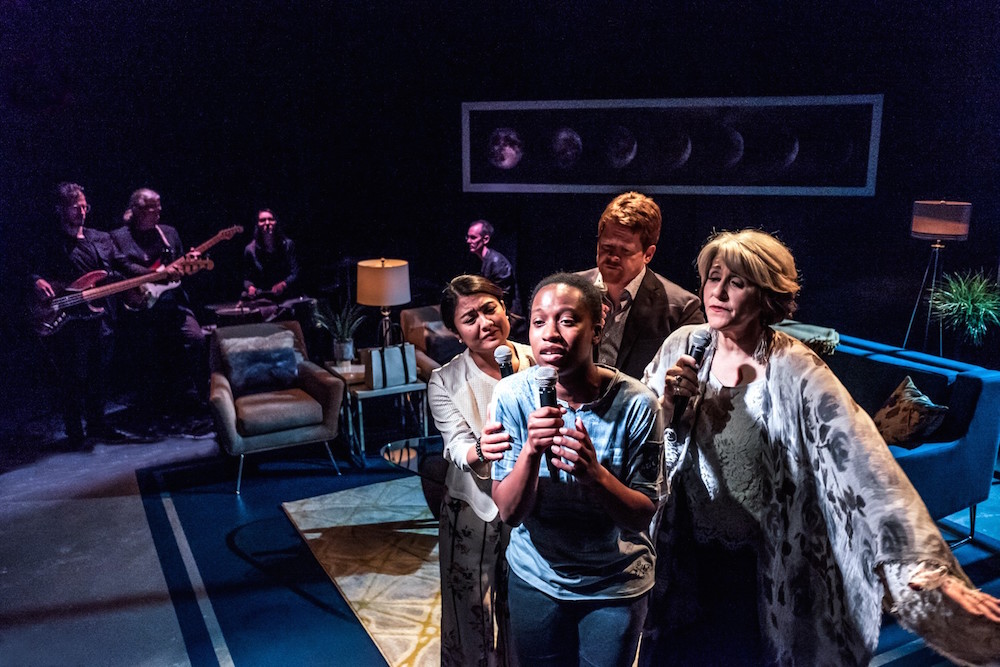 Canadian musical theatre is on the rise. I hate to give all the credit to Come From Away but, with the success of Come From Away, all of a sudden we’re seeing companies take chances on programming musicals and the next wave of composers getting a little more exposure. The slow-developing bridge across the great divide between workshop Fringe musicals and big blockbusters is built on the back of creators like Adam Seelig and companies like One Little Goat that are willing to program intimate but sophisticated musical work that doesn’t need jazz hands and sequins to justify its existence.

Writer/composer/director Seelig has been kicking around for awhile, bringing his signature off-kilter style with him across genres (his 2014 musical satire Ubu Mayor deserves a second look during this current unexpected reboot of the Great Ford Nightmare). His latest is Music Music Life Death Music, on stage now in the Tarragon Extraspace, an oddball look at family life and the miscommunications and inconveniences of inter-generational existence. The onstage band (including Seelig himself on piano) accompanies a quartet of four actors as they weave their way through a memorable, personal score that balances moments of really remarkable beauty with a few too many moments that feel just like the moment before. A music director with jazz credentials (Tyler Emond, who also plays bass) helps pull off the score’s tricky groove, a sound that plays with the margins of musical theatre tradition but never really ventures inside, perfectly capturing the tone of that telling subtitle “an absurdical”.

The star performer is Theresa Tova as the demanding grandmother who is as bullish and unreasonable as she is caring and disregarded. Sierra Holder contrasts her beautifully with an understated, soulful performance as the teenage son of overthinking parents. Seelig’s work could use a director who’s not also the writer to bring a clarifying outside eye to the repetition and pacing issues that make the 75-minute piece seem far longer but, as an auteurist work, Music Music Life Death Music makes a singular impression and a strong argument for the rise of the musical theatre middle class.