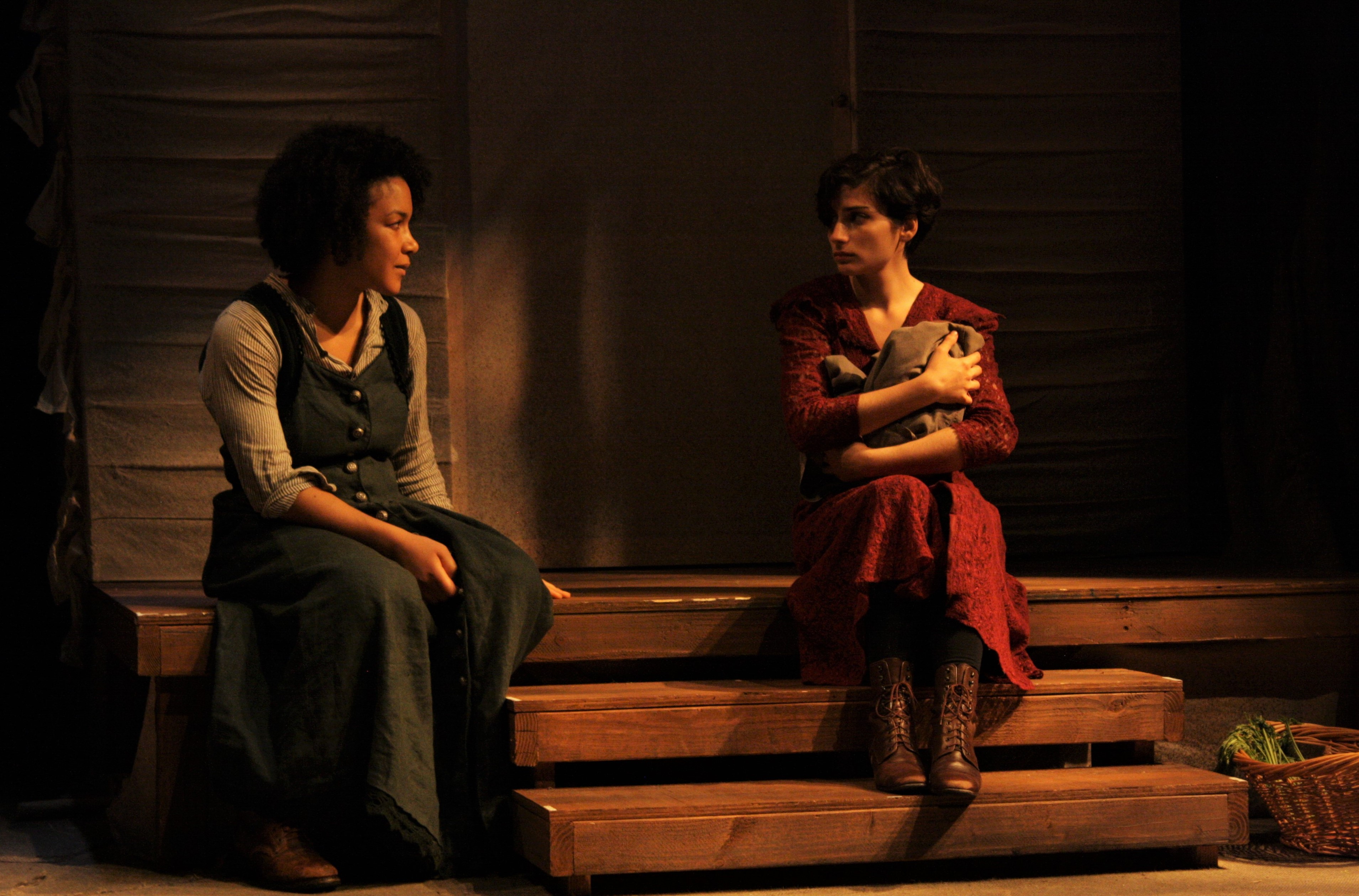 Despite featuring several intriguing characters and relationships, Corbin Went’s new play Old Names for Wildflowers suffers from a lack of focus and originality – resulting in a two and a half hour meandering plot dotted with compelling moments. Exploring themes of ostracism, religious morality, taboo relationships and the many social constraints facing women, Wildflowers uses a post Civil War setting to present a tale of tragedy and persistence in the face of cruelty. Unfortunately, it is also a piece that could benefit from the heavy hand of an editor and more time developing character depth.

Went brings us the story of the Aubert family, a woman and her four daughters who live in a rural town together following the death of the family patriarch in the Civil War. The local preacher, Alexis, provides for the family and his sons grow up with the Aubert children; however, the eldest son, Maurice, woos the youngest daughter, Angele, and the couple have sex, resulting in the birth of an infant. When eldest daughter Melandre finds out about this union, she is crushed and reveals her love for Maurice. Meanwhile, daughters Couer and Zoe are confronted by the appearance of a fox that stalks and perhaps kills a family chicken (its coop was locked at the time). Couer and Zoe are outsiders in their own family – Couer more comfortable outside chopping wood and Zoe flippant about the prospect of marrying a man  and raising a family (very unusual in the mid-1800s). When Melandre takes revenge for Maurice’s perceived slight, her actions nearly destroy her entire family, leaving only Zoe and Couer to face the repercussions. Ultimately, Zoe and Couer must fight to save themselves and Angele’s young son from the townspeople who accuse the women of witchcraft.

Went’s greatest strength is characterization, yet Went fails to build a cohesive storyline for the characters. Zoe and Couer are mysteriously compelling, both marred by wounds (Couer with burns on her face and Zoe with leveled accusations of witchcraft) and seeking solace in the arms of one another despite their familial ties. They are resilient, headstrong, passionate and intelligent. However, they are pulled into too many micro narratives for the play as a whole to feel worthwhile. Zoe and Couer are sisters yet they share a love beyond that of sisters while caring for a baby who is the product of unknown incest – a twist that seems both unnecessary and cliche. Zoe and her sister Angele appear to use magic to cause others distress, resulting in allegations of witchcraft, although it never becomes entirely clear whether Zoe practices magic. In one scene, a charming bookseller stops by their home purporting to sell books he cannot read, the insinuation being that he is the devil tempting Zoe with dark magic, which she rejects. While the appearance and interaction between the Bookseller and Zoe sizzles with tension, his incursion does little to forward the plot or reveal anything more about the women. Perhaps most importantly, it is not until late in Act I that we finally get to focus on Couer and Zoe, with much of the first half of the play a slow slog through trite dialogue and unnecessary backstory.

The creative team behind this production has various levels of success interpreting the source material as well. Director Emma Rosa Went’s staging can feel organic, but when combined with Chris D’Angelo’s aggressive lighting design and Corbin Went’s sound design, which during transitions reaches cacophony levels, as if a flying saucer hovers just above the The Tank theatre while a grandfather clock ticks loudly nearby, it feels like the show stops and starts in fits. Much of the length of the production could be shorn off by combining the action in several adjacent scenes. Dan Daly’s scenic design charms with a well-crafted rustic appeal – simple yet refined and appropriate. Sara Fellini has done an excellent job of outfitting the actors in clothing invoking the period, which is a difficult task on the budget of a small scale production, but she executes it expertly.

Like much of the production, the Wildflowers ensemble has both strengths and weaknesses as well. Alexandra Gonzalez manages the difficult diction and the 1800s parlance in the book, but she hardly seems older than the cast members who are meant to portray her daughters and at times lacks the emotive spirit to convincingly deliver her lines. Zoe Goslin gives a sympathetic performance as the jilted Melandre, but I wanted more progression in her character – more of an indication of how deep her love for Maurice ran so that her final act of revenge makes more emotional sense. Highlights of the cast are Finn Kilgore who, despite having a very brief scene, has a coy, alluring presence as the mysterious character. Jackie Abbot and Karen Eilbacher are, however, the heart of this cast. As Zoe and Couer respectively, both deliver performances that are nuanced and powerful. Even when the narrative focuses on the other characters, and before it becomes apparent that their two characters will feature in the tale, their presence draws attention.

As a development piece, Old Names for Wildflowers is not without merit – there are compelling moments and challenging motifs worth exploration within the narrative – but Went’s piece could benefit from a serious assessment of what the work seeks to accomplish. The haphazard plotting is often both dizzying and dull, but there are seeds of inspiration in moments, interactions and characters that could serve as strong focal points for a more coherent play.