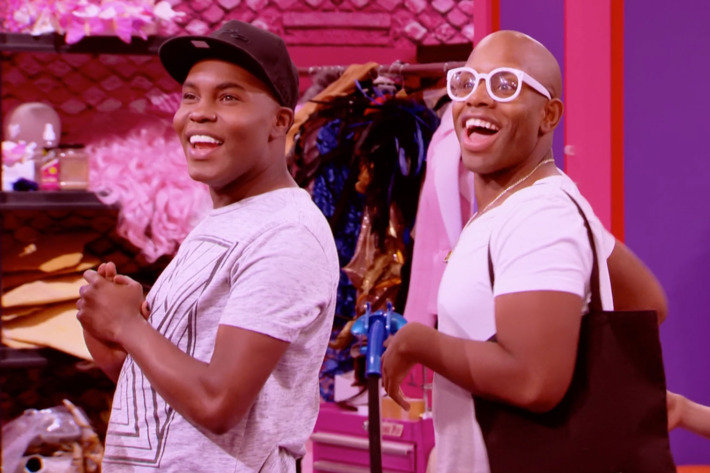 “Evil triumphs when good queens do nothing.”

These are the fitting, essential, and political parting words left on the mirror by The Vixen on her way out the door. Also fitting? The other queens’ responses to it. They pretend as if they are mystified by the sentence, brush it off as if it’s just classic crazy Vixen being cryptic and not saying what she means again, when in reality this is an essential message for drag queens, and for the community at large: It is not enough to be nice, one also must intervene when problems are occurring. But this season is not about doing what is right.

Kameron Michaels kicks off the episode by being continuously irritating about her win, humblebragging about her Cher impersonations and claiming that she didn’t want anyone to know that she wanted to win, as if that makes her better than the queens who are actually hungry for victory. No one seems to be focused on Kameron’s antics, however, because all annoyance is directed toward Aquaria, whose overconfidence and lack of kindness toward the other girls have made her a bit of a pariah in the work room. Unfortunately, I have been forced to pull for Aquaria as the best defense against Eureka winning the season, which is truly a shame, and I’m hoping Asia can continue her bounceback, or that Monet or Cracker can pull it together and finally pull out some wins to make a late-game run for the crown.

I’m pretty sure there’s no such thing as a Straight Icon, but if there were, it would be Stephen Colbert, but for some reason he’s here to introduce the mini challenge, which consists of asking an expanded cast of pit crew members to reveal unflattering undies in a matching game. Aquaria wins and as a result gets to give out the roles for the acting challenge, an episode of Breastworld, because apparently we’re doubling down on appealing to straight people this episode. To make up for the fact that she has been accused of unsportsmanlike conduct from her fellow competitors, she allows them to choose their parts, leaving herself with the smallest role.

In the workroom, Ru confronts Miz Cracker about her wit sometimes getting in the way of her vulnerability, which feels unfair, because Cracker has been extremely vulnerable both to us in confessional and to the other queens in the episodes and on Untucked. The only thing left is for her to be vulnerable on the runway, which often can come across as an excuse when she’s performed poorly. This seems like an excuse that Ru is leaning on to come up with why Miz Cracker can’t seem to be breaking through, when in reality she slayed two weeks in a row for The Last Ball on Earth and the My Strange Addiction challenge, but wasn’t given a win for either of them, and in every other challenge has done her job and never landed in the bottom. She’s doing great, Ru! Leave her alone! To add insult to injury, Michelle is attempting to direct Cracker in rehearsals by using references she doesn’t understand, and then getting annoyed when she doesn’t understand them. Classic directing techniques! Eureka too is struggling, while Asia and Monet are, praise Jesus, rising to the occasion and killing it.

While they get ready for the Silver Foxy runway, it occurs to me that the mirror conversations have turned into mini podcasts. Today’s topic is: Drag and aging. While some contribute that it ages your body to be performing under those conditions every night, others, like Asia, say that drag helps keep her young. Aquaria talks about her deep respect for her elders, AKA everyone in the world, and refers to Amanda Lepore as “Amanda” which is a cute way of bragging.

On the mainstage, Abbi and Ilana of Broad City are here! Abbi’s makeup is a tragedy but these ladies can do whatever they want as far as I’m concerned. I love Cracker paying homage to her drag mom Bob the Drag Queen by walking the runway purse first in her Miranda Priestly realness. Asia doesn’t really look old, which Michelle will clock her for, but the performance sells it. On the other end of the spectrum, Monet’s boobs are about to hit the floor, and this look is fantastic except that Ru is deeply obsessed with Monet having bigger hair, a hang-up she is going to need to get over, though I know she won’t. Aquaria looks like Donatella Versace, and in this instance Michelle is correct that she does not look like an old person. Kameron’s actual garments are pedestrian (bodysuit and jacket? At final 6? Okay). However, she does sell it with the performance and it suits the challenge so she will still get praise. Eureka delusionally claims that her terrible look somehow isn’t camp, as if it’s some sort of accomplishment, and when the judges ask her to explain her look she tells them that she just liked the coat and wanted to wear it. Amazingly, the judges still cut her absolutely monumental amounts of slack, then worry that they’re being too hard on her, because this season is planned out for Eureka to win. I saw a conspiracy theory on twitter that they’re going to let her win so she doesn’t sue them for breaking her knee, and honestly, I might be convinced.

In the sketch, Cracker doesn’t earn big laughs, but she does her job respectably, whereas Kameron can barely fumble through her lines, let alone perform them. Eureka low-energy and forgettable. Aquaria, Asia, and Monet are all fantastic, and I’m happy Asia gets the win after last week, though I myself would have given it to Monet here. The entire episode I was feeling extremely nervous that it would finally be Cracker’s turn to lip sync, and was overwhelmed with a sense of justice when Kameron and Eureka land in the bottom two. Unfortunately, Ru simply cannot let this be a meritocracy and allow us to have nice things, so after what I would characterize as a good, but not that much better than average, lip sync, these two mediocre performers both get to stay in the competition. This wasn’t even better than last week’s Asia vs. Vixen lip sync, though Ru would never dream of a double chantay for that performance, and it certainly wa nowhere near the last double chantay of Tatianna vs. Alyssa in “Shut Up and Drive” during All Stars 2, the last truly iconic season of Drag Race. Let’s all go rewatch it now, and remember a better time, when talent won out and non-eliminations were earned.