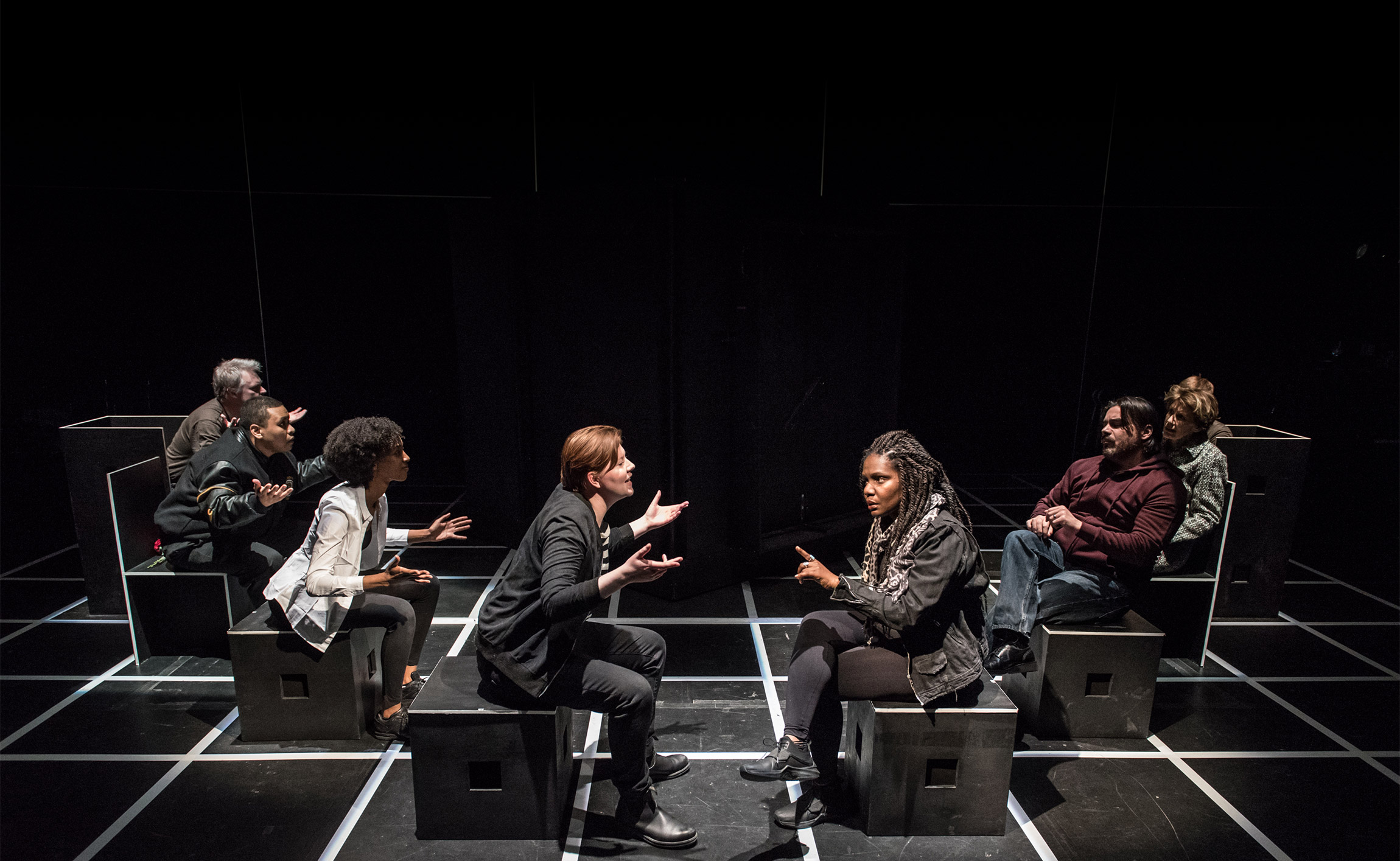 Love and Information at Canadian Stage

Caryl Churchill’s Love and Information, which premiered with Canadian Stage on Thursday, April 12th, is a fascination meditation on Love, Information, and the many places these two concepts meet. Under the direction of Tanja Jacobs and Allistar Newton, any production of this play is no small feat. A production has anywhere between 51 and 76 scenes and no production will ever be the same. Written in a style that gives a lot of directorial freedom, it is always interesting to see what choices a creative team will make. While I am a fan a Caryl Churchill, and appreciate the workout that this play presents for actors and directors alike, Canadian Stage’s production left me wondering why certain choices were made, and over all frustrated at the lost opportunity that this play offered.

Love and Information is the most recent play by celebrated British playwright Caryl Churchill. Written in a similar style to David Crimp’s Attempts on Her Life or Sarah Kane’s4.48 Pyschosis, there very few stage directions or character markers in the original text. The play is a series of vignettes, most often with scenes between two people. There are 7 sections in the original text, and while the text calls for these sections to be played chronologically, the scenes within that section can be played in any order. There is also a list of optional scenes at the end of the text, that can be put in the play at any point. The only ‘mandatory’ sections are the final scene, and the inclusion of a scene called ‘Depression’. Besides that, and all of 9 stage directions in the 110-minute play, everything else—from costuming, casting, gender, race, setting, props—is to the director’s discretion. Each scene (some lasting only a line long, some told in Morse Code, some being only described by the title ‘dance’), are about moments of love and information. Love takes shape as romantic love, familial love, lost love, love for self, or home. Information is read as facts, math, memory, communication, technology or secrets. It’s a dense, complex and varying script, saying more in its silences, in its unfinished sentences, in performance, than it says out loud. It asks the audience to take all the information and make some sense of it. I am familiar with the original play text, and was very excited to see the production, as so much depends on the creative choices. While there are a few hard-wired moments in the script, a creative team has the freedom drastically alter the narrative of the play. What would this creative team do with this collage of love and information?

I’ll be honest that I was disappointed. In a play that offered so much directorial freedom, directors Newton and Jacobs took liberties with the text that confused me. The ‘mandatory’ depression scene was omitted, as were scenes from the core text. In their place, they had 3 dance scenes, and repeated many scenes. Putting my Churchill-purist bias aside, transition music stood at odds with the evocative text, and certain scenes were so dressed up with directorial intervention that they lost their original meaning. For a show that is (titular at the very least) about Love, I found very little connection or chemistry between the performers on stage. And choices to ham up the comedy in certain moments cheapened the text, removing any potential for a deeper message or meaning.

The set design, by Eo Sharp, owed much to the original 2012 design by Miriam Buether, with a multipurpose cube in the center of the stage that acted as a bed, a rooftop, a mountain, a door way, to name only a few. The stage was a grid (also present in the 2012 design), where performers appeared like breathing plots in a graph, or living pawns on a chess board; love and information.  The performers played many, many roles; 8 performers played a possible 100 parts. For the performers, this show is both a sprint and a marathon: scenes, characters costumes, props appear and disappear at a moment’s notice. Yet, in all this running around, I wondered occasionally if the performers cared about the words they were saying (or were they already mentally on the next scene?). While some strong relationships were established in the myriad of short scenes, that was about as far as they went. Don’t get me wrong, all the performers were strong in their own right. They all demonstrated a range and diversity in their performances that alone is worth the price of admission. But larger questions remain for me: what is the implication of an ‘older’, white male ‘professorial’ character telling a ‘younger’ black female character that they love them in the final scene? What are the implications of a ‘younger’ white male character performing the caricature of an older woman for laughs? How do these choices square with the larger themes of love and information? Was there a choice made at all? Many of the scenes left me annoyed and confused. The strongest choices, were simple, strong and evocative, bringing the writing to life, and leaving the audience wanting more of those characters, more of that story. But the choices were more miss than hit. I wondered at the choice to frame a scene as a film within an play, for instance, or another as a ventriloquist act, or standup comedian. These moments upstaged the text, and the evocative questions within the scene.

Perhaps the team were trying to bring out the absurdity in Churchill’s text. But the end result seemed overdone and over-thought; a production dressed up to the point that I actually can’t see the original. And while I believe in ‘death of the author,’ with this being Churchill’s most recent work, and with all the relevance it still holds, this production felt like a missed opportunity. A missed opportunity to bring words, performance, and directorial decisions together, asking the audience to process themes of memory, sex, technology, language, family, stars, and more. To take all that information, and find within in it, love.