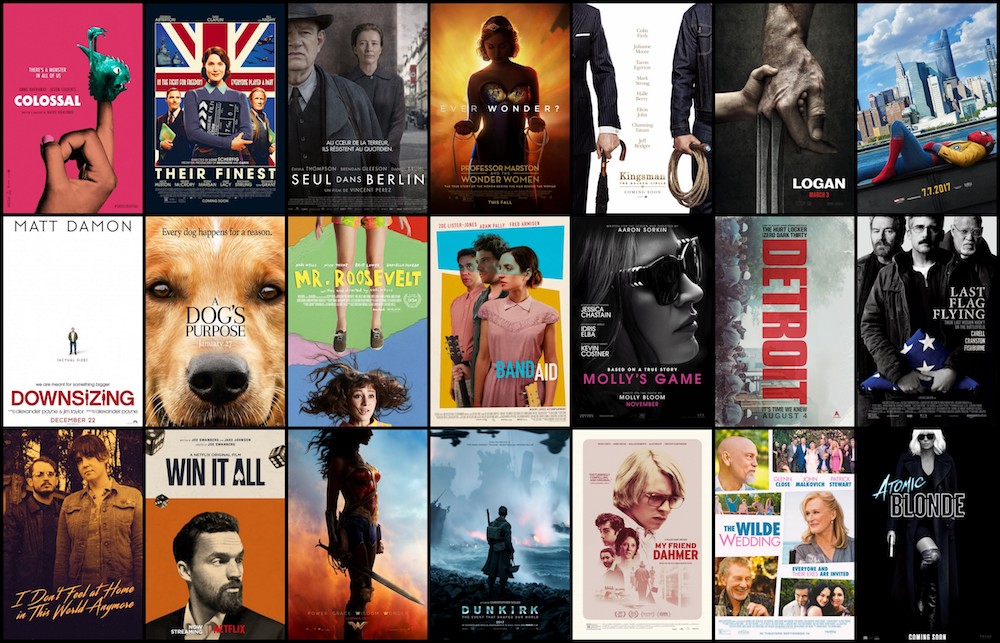 We’re almost there! At this point we’re only talking about movies I liked. In fact, in a year as strong as 2017, #22-42 are movies I really really liked. Like, “top 10 in any other year” kind of movies. And maybe a couple at the bottom there that still just qualify as “pretty good”.

22. Colossal
Writer/director Nacho Vigalondo’s monster movie/allegorical suburban dramedy was one of the most creative films of 2017, which is really saying something. It also featured Jason Sudeikis in arguably his best performance to date (or not-so-arguably).

23. Their Finest
The only one of the three Dunkirk movies this year that wasn’t nominated for an Oscar was my favourite of the three by far. I was completely enchanted by this overlooked gem that was part period romance, part war movie, part showbiz drama with a thoughtfully unromantic perspective. Gemma Arterton is a winning leading lady, Sam Claflin gets more interesting with every role, and it’s impossible to go wrong with Bill Nighy.

24. Alone in Berlin
This was another WWII movie that went shockingly overlooked (one of the themes of 2017 it seems, in yet another year with an outrageous number of WWII movies). The hyper-personal focus of the storytelling and the perfect principal casting- Brendan Gleeson, Emma Thompson and Daniel Brühl- are the keys to success here in one of the most acutely moving and rivetingly tense wartime films I’ve seen.

25. Professor Marston and the Wonder Women
This movie is bold and weird and unapologetic and emotional and complicated and uncomfortable and intriguing and honest and undefinable and a little unspeakable and god I just loved it so much. Rebecca Hall is an acting goddess.

26. Kingsman: The Golden Circle
This sequel admittedly has some problems (you need to remember way more than you actually remember from the first film, there are some serious CGI issues, an over-use of Elton John, and at one point they plant a tracker by fingering someone which is my least favourite thing in a movie this year) but, if you can get past those things, it is So Fun. Julianne Moore’s Poppy is a really refreshing new type of female villain and her drug legalization gambit is all kinds of interesting. The all-star cast is killer: Channing Tatum is deployed both perfectly and smartly sparingly, Mark Strong delivers one of the most memorable scenes of the year, Taron Egerton is an incredibly charming leading man, and Colin Firth is Colin Firth. I just had a grand ole time watching this movie.

27. Logan
The best superhero film of the year was also one of the great emotional dramas of the year. Full-circle payoff to two of the defining performances of the modern movie era. That last shot still makes me well up.

28. Spider-Man: Homecoming
I liked a thousand things about this movie, my favourite MCU offering in a very long time. My love of Tom Holland is long established, and he was predictably delightful, but pretty much everything about this movie worked for me from the “it’s cool to be smart” subtext to the relatable love interest to Zendaya’s awesome new zero-bullshit MJ. It just made me happy in that specific way only a really fun blockbuster can. More thoughts HERE.

30. A Dog’s Purpose
Speaking of heartwarming goodness, I LOVE A DOG’S PURPOSE!!!! It’s not as good of a movie as most other things in this section of the list but I’m one of those crazy dog obsessives and I sobbed every time I saw the trailer for this movie (seriously, I cried like 10 times over this film before I saw this film). It’s such a well-intentioned, sweet, happy movie full of earnest appreciation and unapologetic love. It’s like a dog in movie form- pure, simple, loving goodness. Keep your cat-like cynicism to yourself.

31. Mr. Roosevelt
Continuing on the “movies about pets” train, this indie from shortlived SNL “star” (slash Master of None season one girl) Noël Wells is a sweet, honest rumination on connection and priorities and pettiness and the ugly stuff we do when we convince ourselves that we’re the hero of the story.

32. Band Aid
Zoe Lister-Jones (writing, directing AND starring because she’s a DIY badass). Adam Pally. Indie relationship dramedy about a couple who starts a band so they can turn their fights into songs and communicate better. If I hadn’t loved this, something must have gone went terribly wrong.

33. Molly’s Game
Look, an Aaron Sorkin movie is still an Aaron Sorkin movie (he’s listed as my religion in the About Me section on Facebook). Idris Elba is good, Michael Cera is Great (one of my favourite performances of the year). But this movie is just kind of meh. The father/daughter stuff is forced (and evidence that Sorkin doesn’t have the dramaturgical support he needs right now, that storyline reads like personal stuff that shouldn’t have made it past the first draft) and Jessica Chastain doesn’t have a knack for Sorkinese (which is mandatory, I don’t care how many Oscar nominations you have). I’m hoping the terrible voice-over writing is lifted straight from the source material because it’s uncharacteristically just plain bad writing (Sorkin has his struggles but “just plain bad writing” is not one of them). But, mainly, I just don’t think he should direct. If you’re really exceptional at something, I don’t want you to do something else. I understand the temptation, but I want Sorkin back in his lane doing the thing nobody does as well as he does it. He’s not a multi-hyphenate, he’s a specialist.

34. Detroit
About a half hour of tension-relieving denouement drags this brutal history play down from the incredible heights of engrossing pathos reached by the heart-racing and bone-chilling first two acts but the impact of that first 90 or so minutes is unshakeable. A horrific true story dramatized by Kathryn Bigelow and her go-to screenwriter Mark Boal, this 1960s-set drama about police brutality is almost too timely to be believed. But you have to believe it. Will Poulter, whose casting type appears to be limited to “little shit”, plays a horrific villain with a performance criticizable for its single-mindedness but laudable for its Joker-esque bravado while John Boyega holds a thousand feelings inside telling stoicism. The cast is tremendous and the tension incomparable, if only there was a harsh cut to a written epilogue before any bows were neatly tied.

35. Last Flag Flying
This Richard Linklater road movie about old war buddies faced with the fallout of a new generation’s war is well cast and refreshingly funny and really genuinely moving. I’m not quite sure how it got so lost in the shuffle.

36. I Don’t Feel at Home in This World Anymore
An oddball Netflix indie for the misfit in all of us. Elijah Wood embraces the weird (which always serves him well) and Melanie Lynskey continues to be the president of profound naturalism.

37. Win It All
Joe Swanberg is a pretty reliable fellow. This one isn’t quite up to Drinking Buddies standard but it’s still pretty good. And who doesn’t love Jake Johnson? Here he plays a gambling addict trying to get his life together but when he’s asked to hold onto some money for a dangerous acquaintance while he’s in prison, he can’t stay away from the action (and we’re not just talking Party Casino here, we’re talking lethal underground games with a….different sort than the Molly’s Game crowd). The ending is abrupt but the journey is a worthwhile slowburn.

38. Wonder Woman
I cried. I didn’t think I would cry because duh women can kick ass but I totally cried. Chris Pine is a cute sidekick boyfriend in the tradition of cute sidekick girlfriends throughout history. The third act devolves into CGI dumbassery. David Thewlis has never not annoyed me in anything ever. But, main point: I cried.

39. Dunkirk
I found the time gimmick confusing and absolutely hated the sound design (a constant barrage, not a realistic one) but I was surprised to find myself really pretty emotional at the end of this showy Chris Nolan vehicle. The visual filmmaking really is arresting and, though I’m not sure the film’s value translates beyond an IMAX screen, it was a really impactful movie-going experience.

40. My Friend Dahmer
This emotionally ambitious film dances trickily on the edge of humanization as it portrays a backstory of disturbing psychology, brutal circumstances, and casual cruelty that preceded the first murders of infamous cannibal serial killer Jeffrey Dahmer. Alex Wolff gives an incredibly compelling performance as Dahmer’s closest almost-friend, tying the audience in knots between wanting him to run to safety and wishing he’d reach out and be the hand we naively believe might have made a difference.

41. The Wilde Wedding
An awesome cast of totally random great people playing improbable family members gathered to celebrate the matriarch’s latest marriage (Minnie Driver! Noah Emmerich! Glenn Close! John Malkovitch! Patrick Stewart! Peter Facinelli whom people should love a lot more than they do!). It’s odd and a little tonally ramshackle but it took me by surprise and thoroughly delighted me.

42. Atomic Blonde
This was so kickass. A great soundtrack, a killer graphic novel vibe, Charlize Theron ice cold, James McAvoy goofily eccentric, violence that felt rooted in something real and tied to actual consequences- Atomic Blonde was like the action movie ideal. The final twist played into an American trope that always irks me but, who cares; this movie is so cool.