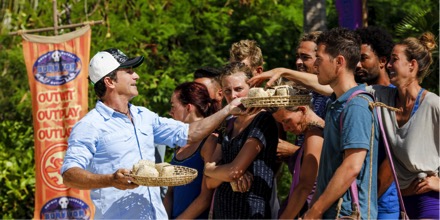 Survivor Ghost Island, Ep3: If the Wave’s There, You Gotta Surf It

Welcome back to Survivor: Hot People Island! This episode was filled with continued encouraging signs from the premiere that this season will be better than the last, as well as some unsurprising but still worrying stuff strategically. The good news is that post-swap the two tribes are much more even in terms of how interesting they are. I did feel during the premiere that we were fortunate that Malolo lost both of the immunity challenges, because as the far superior tribe in terms of characters, it was great to get to spend more quality time with them on their beach, even though it did ultimately mean losing two potentially big characters. Though many of my early favorites including Donathan and Husband James remain on a tribe together at NuNaviti, some big personality power players like Stephanie J have been split off to create characters on both sides.

The swap would be an excellent time to hear from some cast members we don’t know as well in confessional and get their takes. Unfortunately, the editors do not share that opinion, and we go the second week in a row hearing nothing from Chelsea or Bradley, save for a few shots of Bradley complaining about how much of a dump the old Malolo camp is, which Professional Hot Dad Brendan is having none of. Meanwhile, we get to check in with some old favorites about how they’re feeling. Sebastian, in his second ever confessional is feeling like a piece of banana laffy taffy, which continues the trend of 100% of his lifetime confessionals to this point being about candy. It is not hard for me to understand why Sebastian would relate to an item that is basically unappealing and full of bad jokes. Queen Kellyn, who I am officially dubbing the winner of Survivor: Ghost Island, gives potentially the most relatable confessional in recent memory to me as an out and proud baby hater, in which she says that her efforts to say nice things about the grody Malolo camp are equivalent to when you meet someone’s ugly baby and have to pretend they are cute. This is an experience I have had with every single baby I have encountered.

The swap also keeps old rivals together. Domenick and Chris, who are fiercely competing over whose masculinity is more toxic, remain together and are all set to target each other, rather than keep the old Naviti strong. Chris tells Angela about Domenick’s idol, and then drops all pretenses of sticking together and spills the beans to the old Malolos in a big power play to get out Domenick. Domenick is later able to defuse the accusation by showing James, Laurel, and Libby the fake idol that he showed Chris, and I don’t understand why people don’t do this more often. When you’re accused of having an idol, just say that the person who accused you was tricked by you having shown them a fake one. Unfortunately for Domenick, this doesn’t take the shade directly off of him, because my perceptive husband James thinks it’s possible that Domenick is double bluffing and actually does have a real idol.

Speaking of idols! Stephanie and Jenna go on a mad dash to find one for themselves since they are in the minority at their new camp. It’s very rare we get to see mad idol dashes like this from women and I’m very much loving it until the second Brendan and Michael get involved and of course immediately find one. Michael’s belonged to James in Survivor: China, and I’m realizing that the downside of showing these scenes from previous seasons to explain the advantages is that I’m just going to miss all of these better seasons. Last week it wasn’t too much of an issue with the clip being from Caramoan, but boy do I miss Survivor: China.

Anyway, the challenge is a fun rendition of Fijian Ninja Warrior, in which the first task is a literal copy of the triple steps, the first obstacle from several seasons of American Ninja Warrior. It’s fun and Kellyn establishes that she is well on her way to becoming one of the great puzzle-makers in Survivor history, but unfortunately some of my faves on NuNaviti are sent back to tribal council. This is the first we hear that if the winning tribe can’t unanimously agree on who to send to Ghost Island, it is determined by random chance, and good old Chris Noble pulls the unlucky rock. From a TV standpoint, this is a good thing; the tribe is now going into the vote 4-4 old Malolo vs old Naviti. However, from my personal perspective, I am not loving this. For one, Chris now has immunity, and the person leading the charge against Domenick is out of the equation, meaning the vote is going to flip from it being one of the two of them, which it seemed like it was going to be. For another, we have to spend more time with Chris, which is always a treat. Fortunately, on his own, Chris focuses less on muscle flexing contests with Domenick, divulges his mother’s struggles in facing MS, which is a side of him that is much more tolerable than his usual bravado. Despite this, I am glad that he doesn’t receive an advantage on Ghost Island.

What I am not glad about is the fact that the target shifted from being one of the alpha males to definitely being a woman. Libby has bonded with Morgan over being Catholic, but James wants to target Morgan for being Domenick’s ally, who he’s scared of but doesn’t want to vote for because he might have the real idol. It’s smart because he does have a real idol, but also incredibly frustrating because even if he didn’t, people are so scared to target big strong men who might have idols that they always try to weaken them by taking out a woman who’s close to them who really did nothing wrong. Also, they clearly blindsided Domenick with the Morgan vote, which indicates to me that they could have pulled off a blindside of the man himself and sent him home with an idol in his pocket. Angela is also thrown out as a potential name because she seems suspiciously willing to go to rocks in this vote, which Wendell correctly assesses is insane. He’s willing to vote out Angela, which Libby is good with because she loves Morgan. I do think it’s great that James was able to bounce back from his weak position last week and pull of a move of his own here, but I’m not sure why it was so much more important for it to be Morgan than Angela. Morgan is definitely more of a strategic threat because I don’t see Angela lying much, but taking out a number from the other side is still good, and if it comes with the added benefit of not pissing off your alliance member in Libby, you have to go for it there. They obviously have no way of knowing this, but voting out Morgan also has the added cost of loading Domenick up with yet another advantage when she wills the legacy advantage to him. Ultimately, it’s very messy and the fact that Libby is literally crying makes me worried that she’s going to leap at an opportunity to turn on James if it’s good for her game.

Despite these concerns, I’m excited about the result. I feel bad that Morgan was a victim to being a man’s right-hand woman as we’ve seen so many times (see also: my recap of Jessica’s elimination from HHH), but also I would like to take this moment to say that SeaWorld is evil and anyone who works there lacks either the capacity for critical thought or any semblance of compassion and I am not sad to see them fail. On that note, I’ll see you next week!