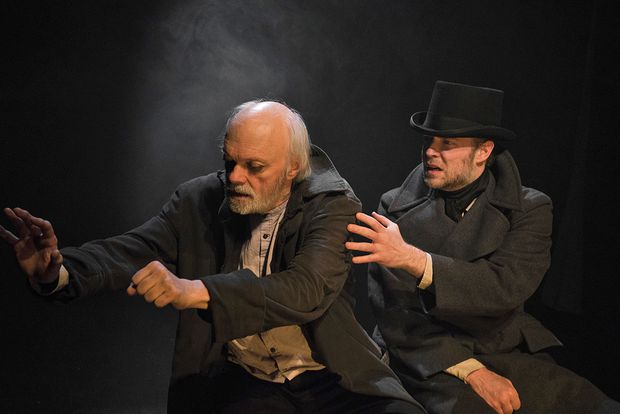 Victor Hugo’s nineteenth century classic about Jean Valjean, a man who steals a loaf of bread to feed his starving family, spends nineteen years in prison, and begins a new life under an assumed identity where he seeks to do good, has been adapted into multiple feature films, a Japanese animated series, and most notably, a popular mega-musical. Now it’s the subject of a new play by Theatre Smith-Gilmour.

Adapting a novel of this size (the unabridged English translation of Les Misérables comes in at over 1,400 pages) and renown is an ambitious undertaking that only somewhat works. The six-person cast, who play multiple roles, are generally solid except for a few directorial missteps, and the script wisely draws upon the natural humour found in the novel’s endearing, but awkward, character of Marius Pontmercy to lighten the occasionally depressing subject matter. Yet, the play failed to move me. This Les Misérables suffers from focusing too narrowly on the narratives of a few characters to the detriment of the story as a whole.

Adapting Les Misérables to fit a six-person cast seems a Herculean task, but the company is, for the most part, up to the challenge. Company co-founder Dean Gilmour gives a captivating performance as the ex-convict who breaks his parole and starts a new life of service under an assumed identity. His Valjean is rough around the edges and achingly human as, in one of the play’s most visceral and compelling scenes, he undergoes a crisis of conscience over whether to sacrifice his freedom and ability to do good works in order to save an innocent man mistakenly arrested in his place.

As the dogged Inspector Javert, Mac Fyfe is a match for him, portraying the character’s absolute devotion to the law and his unraveling when his principles are challenged. Benjamin Muir expertly balances Marius’ passion with his awkwardness to provide the play with some of its lighter moments, and Diana Tso is good as the calculating Mme Thenardier but could be bolder as daughter Eponine. A few unfortunate direction choices mar Nina Gilmour’s otherwise moving turns as Fantine and Cosette. As the younger Cosette, Gilmour puts on a high-pitched girlish voice that had audiences laughing and took away from the sympathy we should feel for this victim of child abuse, while the choice to depict Fantine’s affair with Tholomyes in such a light-hearted manner diminishes Fantine’s tragedy, making her seem naïve and complicit in her fate.

The minimalist staging uses limited props to great effect, relying on narration, sound effects, and gestures from the actors to set the scene. Evocative lighting design by Simon Rossiter and simple costumes by Victoria Wallace complete the picture.

A lot of thought has obviously gone into adapting Victor Hugo’s epic novel, with Theatre Smith-Gilmour co-writers Michele Smith and Dean Gilmour carefully selecting which scenes and plot points to include, abridge, or omit altogether. Theatregoers these days are likely familiar with the plot popularized by the Boubil/Schonberg mega-musical. Theatre Smith-Gilmour’s production deviates from the musical’s path by including characters and scenes not previously staged, such as a face-off between Marius, a Republican like his late father, and his royalist grandfather in a humourous scene that opens the second act.

As a fan of the novel, I was thrilled to see one of my favourite moments in the book, the attack on Gorbeau house, brought to life. The scheming Thenardiers recognize Valjean as the man who took a young Cosette off their hands and hatch a plan to rob him, but their attempt is foiled when their neighbour, Marius Pontmercy, alerts the police and Javert arrives to arrest them. It’s a tremendous shame that Theatre Smith-Gilmour doesn’t take advantage of the opportunity to show Javert’s humanity and sense of humour, omitting his entrance and snarky response (“Would you like my hat?”) to Thenardier’s gang, as they consider drawing names to decide who should escape through the window first.

Perhaps falling victim to the small size of its cast, this production dramatically pares down the role of the student revolutionaries. I never thought I’d say this about a production of Les Misérables but here goes: it needs more students. The anti-monarchist Paris Uprising of 1832 is a significant subplot in the novel and in the musical, but student revolutionaries are such an afterthought in Theatre Smith-Gilmour’s adaptation that I wonder if the average audience member even knew what they were fighting for. It’s an odd choice to use the tagline ‘what would I die for?’ in marketing material while depriving the audience of answers from the student revolutionaries, and spending so little time with any of the students (except Marius) lessens the impact of their deaths.

Choosing to hone in on a single theme, the awakening of conscience, Gilmour and Smith give the play an intimate feel that serves individual characters (Valjean, Javert, Eponine, and Marius) well. The trade-off is that we lose some of the novel’s grand scope and its discussion of social issues that remain relevant today. In her director’s note, Michele Smith refers to Les Misérables as a “call to arms” to find, and act in accordance with, one’s conscience, but there’s limited discussion of exacting change on a larger scale.

Part of the problem, and I say this as a long-time fan of both the novel and the musical, is that this adaptation doesn’t feel necessary. And it should. Les Misérables is so enduringly popular more than a century-and-a-half after its publication not only because its characters display such humanity, but because Hugo’s passionate discourse on social issues of the day, including injustice in the criminal justice system and the treatment of the poor, continues to have contemporary resonance. Theatre Smith-Gilmour’s Les Misérables is to be admired for its distillation of the text, but is less successful as an innovative work with something to say.