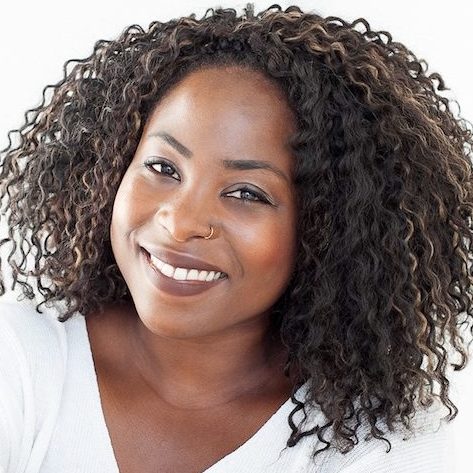 Outstanding Supporting Actress nominee Mamito Kukwikila is an actor, writer and producer who came to Toronto from London in 2014 and who has recently begun appearing onstage throughout the city. Her brief but affecting performance as Laura in Theatre Inamorata’s Gray brought a surprising calm and openness to what was often a darkly satirical play, and she and fellow nominee Tennille Read played off each other with a memorable interplay of warmth and caution in their scenes together. She was also seen last year in Deanna Bowen Productions’ On Trial the Long Doorway, and is currently busy writing and producing further projects. We look forward to seeing more of her work!

What was your first experience with theatre?
My first experience with theatre as a performer was probably around the age of 7 or 8. My twin and I attended Saturday performing arts school and I really enjoyed the drama, singing and tap dancing classes (tap dancing because it was little rough around the edges). I disliked ballet with a passion. It was too graceful and pretty for me. The first show I ever went to see was Les Miserables in the West End on a school trip in Primary school, but my first visceral experience of theatre was seeing the South African musical, Umoja – The Spirit of Togetherness. I had the same feeling I had when I saw Black Panther, recently. A feeling of being seen and celebrated and I just wanted to be on stage with all of those performers. My family and I rinsed out the Umoja soundtrack. We loved it.

Are there any particular performers you’ve been or are inspired by?
I could really go on here; just because I have a list of performers who I am truly inspired by but I will try to be a succinct. There are two performers who really ignited my desire to pursue performance as a career: Cate Blanchett, especially in Elizabeth and Angela Bassett, in What’s Love Got to Do With It (the Tina Turner biopic) and Waiting to Exhale (there’s an iconic scene in Waiting to Exhale in which Angela Bassett is just a boss). In What’s Love Got To Do With It, I remember just feeling so struck by her determined will and braveness to display the duality of this superstar’s life. It really moved me. I think Angela Bassett is such a versatile actor who has the ability to embody strength and power in all her characters even in the most harrowing of situations. I also really admire the work of Viola Davis, Carey Mulligan and Denzel Washington.

Can you talk about how you became involved in Gray?
I met Michelle, one of the producers and who played the wonderful Opal, through the Generator as we were both doing the Artist Producer Training (APT) at the same time. She asked me to read for the characters of Laura and Jane. It was a lovely process.

Laura is a uniquely grounded character in the darkly satirical world of the play. Can you talk about how you developed her characterization?
The characterisation of Laura was definitely aided by the kind of rehearsal environment that Courtney [Ch’ng Lancaster] set up, which allowed for a lot of conversation and discovery to happen in the room. I think through having an understanding of who Laura was internally it allowed for me to find her physically and emotionally. I had a lot of fun creating playlists for her (I decided that she was an Esperanza Spaulding fan), playing with physicality to find how she would walk and where her voice was placed in my body. Laura is also an intelligent woman, so I did work on understanding the art world that she comes from. Whilst Laura is indeed a grounded person, it was beautiful to find those moments of vulnerability and insecurities.

Gray explores the ways in which artistic communities can be alternately very supportive places and very toxic ones. Were there aspects of the play that you found particularly recognizable, or alternately, far-fetched?
There were definitely aspects of the play that I recognised. This idea of artistic communities being both supportive and toxic at the same time is something I have felt, be it self imposed or otherwise. The arts can be really enriching, rewarding and act as a catalyst to encourage community but it can also be very “cliquey’’ for lack of a better word. I found this to be especially true in theatre at the beginning of my career as an actor more so than film/TV and it can be intimidating. I have definitely suffered from bouts of the “inferiority complex” and a feeling of inadequacy because I did not go through the traditional route of theatre school, so my knowledge of plays, playwrights and theatre in general is not very extensive and I am always playing catch up and whilst I can now hold that as my truth in a positive way in the past it has been something that has stopped me from wanting to participate and this I think can make artistic communities toxic. On the flipside, I have, been very lucky to experience and enjoy supportive / collaborative creative environments where questions are welcomed and this “elitist” stance to the arts is null and void.

Tell us about working with Tennille Read, as she was the person with whom you shared most of your scenes.
Tennille was such a pleasure to work with and I learned so much from working with her. A generous and caring individual, I really felt safe and supported by Tennille in our scenes which allowed for me to relax and let Laura shine through. Tennille is extremely diligent in the way she works and approaches her craft and it made me step my game up. By watching her and doing our scenes together I learned a lot about articulating intricate nuances of a character. What I especially enjoyed about working with Tennille during our scenes was the flirtatious dance of intrigue and power that seemed to underpin our scenes.

Did you find elements of your performance or the play in general changing as the run went on?
It’s a given that elements of a play or performance change as a run goes on, but I think for me, I became more aware of how much Laura holds space and takes care of others to keep the equilibrium of everyone’s world, often at the expense of her own needs. I became really attuned to this towards the end of the run and if I ever have an opportunity to reprise this role this is something I would be interested in exploring further.

How has your experience working in the Toronto theatre world compare working in London’s?
Well, I wouldn’t know how to compare…

I moved to Toronto in 2014 as I felt quite stifled in London and I lacked the courage and belief in myself as an actor to pursue a career in London, so I decided to move to Toronto where no-one knew me and I could focus on my craft completely. My experience in Toronto has shaped the woman I am now and who I am as an actor and I am VERY grateful. All my theatre knowledge and experience has come from the opportunities afforded to me from Toronto, so come back to me at the end of the year I will be able to answer the question.

What are you working on at the moment?
I am currently working on writing my first play with dramaturgical assistance from Alison Wong, who will also direct once we are in that position. I am writing a TV pilot called HERstories with Malube Uhindu-Gingala who is not only my cousin but a Toronto based actor too and I am currently working as a producer with Spun Glass Theatre based out of Brighton in the UK.

Is there anything you’d like to add?
I would like to say a massive thank you to Kristofer Van Soelen for trusting us to do justice by these words and characters. In a time where it is still a rarity for a cis heterosexual white man to create strong, dynamic female characters, it was truly an honour to be apart of this premiere production.