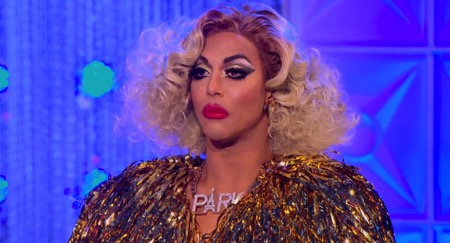 I won’t lie to you: The last calendar year has been challenging for me as a reality TV fan. Survivor for the past couple seasons has been an unsavory combination of unstrategic, predictable, and devoid of likable winners. Big Brother 19 was ugly. The Amazing Race crowned two of the primary perpetrators of that same ugliness in Jess and Cody. It’s been bleak. RuPaul’s Drag Race, to me, has always served as an oasis from the kinds of things that can ruin a season of another reality show: Namely, the editing is rarely a mess since there’s little strategy and they don’t need to explain why people went home or one, since it’s all laid out for us in the challenges and the lip syncs for us to see for ourselves. I’m seldom disappointed with the winner because at the end of the day it’s RuPaul’s Drag Race. No one else’s. By definition, the winner of the season is deserving because she is picked by RuPaul. You can argue from here to Cameroon about whether or not you agree with Ru’s criteria, but you ultimately can’t quibble with the winner because we all know what we signed up for in watching and who has the ultimate authority to decide these things. These fail-safes, the ones that have always kept Drag Race protected from the pitfalls and disappointments of this year’s other top reality shows, however, were brought to their knees this season, and this show, once my favorite show, has become yet another bullet point on the long list of disappointing reality TV this year.

This was not RuPaul’s Drag Race. In many ways, All Stars never is. These girls come in with prior relationships and in All Stars 2 those relationships were tested like never before in having the queens eliminate each other, a rule change that was brought back again this year. When originally announced, I had my issues with this as well, but it never loomed too large as the All Stars 2 girls more or less stuck to eliminating the queens that were the clear choices to go, excepting only the one week Alyssa saved Katya despite her performance that week, which I believe was ultimately a decision to save the overall stronger queen anyway, as was proven by Katya’s domination for the rest of the competition. I thought that this is where this season was going as well: eliminating queens in the order they likely would have been eliminated anyway, so the format only serves to inject a little shot of extra drama. I thought that until Dela’s double shock of eliminating herself and bringing back Morgan over Aja, a moment which solidified that these decisions would not always be fair. That was certainly a disappointment, but it is nothing compared to the incredibly unjust decisions made by the majority of the eliminated queens in this episode.

Let me be clear: I do not believe in bitter juries in Survivor or Big Brother. Everyone on those shows is aware from day one that they will need jury votes in the end, and must play accordingly. If you do not receive a jury vote, it is because you didn’t do a good enough job of getting it. I do believe in bitter juries in Drag Race. I believe in them because this is not part of the game, and these girls had no way of knowing that they would literally be playing RuPaul’s Best Friend Race, the game that the fans and the queens have wanted to avoid for so long in favor of good TV and good drag. If they had known this, theoretically they could have managed accordingly, but it likely would have meant throwing lip syncs. There is no doubt in my mind that the fact that Shangela had a hand in sending half these girls home by winning half the challenges and all of the lip syncs tainted her chances at getting the crown. This format effectively punishes the tops and rewards the second-bests, like Trixie, who wins challenges but not lip syncs and therefore had no blood on her hands. The final lip sync is always a bit of a hoax, but can serve as a tie-breaker in the event that the competition is neck and neck. The lip sync would have been worth something if it had been Trixie vs. Shangela (as it rightfully should have been), with Shangela likely pulling it out as she had every other time, including against Trixie in her iconic performance last week. Instead, we get a lackluster lip sync to a second-rate Miley Cyrus song that is ultimately totally meaningless because there’s no conceivable way Kennedy could win this with her track record this season no matter what she did in that lip sync.

I love Kennedy. I respect the hell out of Kennedy. I can even appreciate that the reverence for her experience and impact on the community was valued by the eliminated queens in choosing her. However, like it or not, this competition is not about who is the best drag queen. This is about which queen is the best at RuPaul’s Drag Race, and this season it wasn’t Kennedy, who only won one challenge, way back in week 3, and found herself in the bottom nearly half of the season. I am disappointed in the eliminated queens for voting bitterly, for being unsportsmanlike with their sisters, for playing favorites instead of being honest. I understand where they are coming from, that they have more information about who Kennedy and Shangela are as people and performers than we as audience members do, but this is not right. Shangela should have won, certainly, but beyond that she should have, at the very least, had the right to have that chance. Despite my issues with Thorgy, I will give her credit for voting fairly and correctly. I have long thought that All Stars 3 was somewhat of a set up to just give Trixie, their biggest star, the crown, much like it was for Alaska in All Stars 2, but Alaska earned the hell out of her spot, only landing in the bottom once and winning the most challenges of any queen there, so no one could complain. I love Trixie deeply (if you haven’t checked out her and Katya’s webseries Unhhh, or the subsequent Trixie and Katya Show, you are missing out) and understand why the queens would want their season to be represented by her, but Shangela deserved a chance. Shangela earned it. Shangela was robbed, and as a Trixie stan, I’m disappointed because this will always tarnish her legacy, put an asterisk next to her name when I think and talk about her in the greater pantheon of Drag Race champions.

I would also like to point out that the editing make no damn sense this season. Why all the drama and build-up between Shangela and Trixie with the note if it was never going to come down to a showdown? All the Game of Thrones talk only to lead nowhere? The rightful conclusion of Shangela’s ups and downs, the drama, the helping each other, it should have led up to a final battle, otherwise why did we spend so much time on it? We spent the entire season with Shangela as the narrator, with so much character work endearing ourselves to her, only to be even more crushed by this outcome. Meanwhile, we saw hardly anything from Kennedy other than a few spats and some occasional wisdom by the makeup mirror. I’m not complaining that we saw more of Shangela, but was this really the most strategic way for them to allocate screentime in order to tell a cohesive narrative that gives viewers any sort of satisfaction? Methinks the editors were not prepared to tell the story of a strategy game.

Despite the conclusion, there were some highlights of this episode. The singing and dancing extravaganza of Kitty Girl was one to rival Read U Wrote U in the minds of many Drag Race fans (though for my money, nothing will ever be as legendary as the one-two punch of Katya’s flawless verse followed by Roxxxy’s awful/perfect trainwreck). Kennedy totally turns it out, Trixie performs respectably, Bebe is… not a total disaster? And Shangela delivers a verse I will be singing in my car to hype me up for work for months. Everyone’s best drag eleganza is beautiful, with Kennedy serving an homage to her original season’s rainbow dress, though unlike Dela’s repurposed dress from the beginning of the season, Kennedy doesn’t just update the look but puts a completely different spin on it (regardless of Trixie’s negativity about the look). Trixie’s looking lovely but ultimately a little forgettable, even with the poodle poof of hair. I had to Google this look to remember the dress. Shangela has a W-I-N-N-E-R dress on and looks full on eleganza. Bebe is serving full body-ody-ody in her leopard look that is a little safe but it doesn’t matter what Bebe does at this point because these eliminated queens are not going to give her the time of day regardless. And this is another problem: Even if Bebe was more transparent, more accessible, more successful in this competition, these queens were never going to let anyone win twice. Bebe was DOA with this twist. In this case it’s acceptable since she wasn’t going to win regardless, but the principle of it is still whack.

During the questioning from the queens, Aja takes the lead, drilling down on important questions regarding authenticity, competition, and the future of drag and is taking no prisoners. It’s too bad she doesn’t make the right choice after this impressive moderation. But alas, Cameroon and Halleloo are sent packing, leaving us to endure the charade of the Trixie vs. Kennedy lip sync. It’s always a little shocking to see how underwhelming the coronation of the All Stars winners are, with credits rolling over as Trixie takes her crown. It’s a good thing we have no time off before waltzing into Season 10, which has a very exciting crop of queens that I think can rectify these mistakes. I think that All Stars 3, like All Stars 1, was simply a misstep, a bad season of a great show that made a lot of errors, but isn’t in any way indicative of “jumping the shark.” The show can turn around, and I believe that it will. All Stars 2 proved that the mistakes of the past can be rectified, and I hope that season 10 does that as well.

On a final note, I hope that season 10 shows us a fair competition and hopefully a winner of color. This is now two robberies in a row from a black queen in favor of a white fan-favorite. In the case of Shea Coulee vs Sasha Velour, there were certainly arguments on both sides, and I personally can’t fault Ru for the decision even though I have come to disagree with it as time has passed. However, to see a final four of three black queens and one white, and not allow the most deserving queen of color to have her shot at the title, feels like an injustice beyond simply the competition, one that veers into more sinister territory that is subject to the inequalities of the outside world that Drag Race should be resistant to. I feel icky after this finale. I leave this season behind, never to be rewatched, with two truths in tact:

Thanks for keeping up all season, see you in season 10!